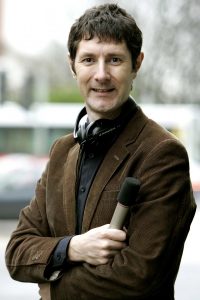 Ever wonder what the world’s largest whoopee cushion sounds like? Trevor Cox knows.

At one point in time, he held the world record himself, deploying the record-breaking airbag for a crowd of delighted schoolchildren.

Aside from his whoopee cushion knowledge, Cox knows a thing or two about sound. He holds a degree in physics and a doctorate in acoustics, teaches at Salford University in Manchester as a professor of acoustic engineering and has presented a number of sound-related documentaries on BBC.

Cox will be bringing his acoustic expertise to Chautauqua at 10:45 a.m. today, July 22, in the Amphitheater to open Week Five, “The Life of the Spoken Word.” His lecture will focus on the journey of the human voice throughout the ages, touching on the origins of speech as well as modern endeavors to teach computers to talk.

“Our relationship to speech, as we know it, is changing,” Cox said. “It’s important to know where we’ve been in order to understand where we’re going.”

Cox said audio technology continues to advance and improve each day. He said that, much like photos are able to be faked and altered through Photoshop, voices will soon be able to be recreated and mimicked by artificial intelligence. He said that alongside these advancements, there are a number of exciting opportunities for digital sound on the horizon.

But despite the looming presence of A.I. advancements, Cox said that the thing that most excites him about the field of acoustics is what goes on in the human brain.

“As a physicist, we’ve got some pretty good equations about how sound moves around and how sound behaves,” Cox said. “But the thing we still don’t understand — not by a long way — is what happens when it goes into the ears and is processed by the brain.”

Although the human brain is something most people are intimately aware of, knowledge and understanding of the complex organ is still far from complete. Cox said this applies to the field of acoustics as well.

“If we really want to understand acoustics, we need to understand what happens when people hear sound,” Cox said. “Because after all, sound that isn’t heard isn’t really all that interesting.”

But that’s easier said than done. As technology advances and scientists are able to build a more complete picture of the human brain, understanding of intricate mental processes and operations undeniably increases. But Cox said that there’s a lot left to discover.

“With all the new information we’re getting, the more we peel away the layers, the more we realize there’s still a lot we don’t really understand,” Cox said.

Cox said that he’s excited to share his knowledge of sound and acoustics with Chautauquans during his lecture today. The talk will feature several multimedia elements, including a video presentation and — since the lecture is focused on sound — a number of different sound effects.

Cox said that everyone, no matter their level of interest in science or sound, has a connection to the things he’ll discuss.

“What makes this topic engaging is that, ultimately, it’s about us,” Cox said. “We all have a voice, and it’s very central to our identity. I think one of the reasons this talk might be of interest to people is that it reveals a little about us individually, as well as us as a species.”