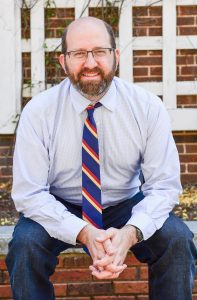 Thanks in part to the people of the Burned-over District, America is a country where women have the right to vote, slavery is illegal and the temperance movement effected policy change at the federal level.

Beginning in the early 19th century and fueled by the religious fervor of the Second Great Awakening, the Burned-over District encompassed a region of western and upstate New York where social and religious revivalism had reached a fever pitch.

“Protestant Christians, living in upstate New York and elsewhere, wanted to solve a bunch of different problems,” said Adam Jortner, an author, scholar of early American history and Goodwin-Philpott professor of history at Auburn University. “They wanted to use their faith to address social problems in substantial ways.”

“Every single person who’s talking this week is going to have a different idea about why the Burned-over District became what it was,” Jortner said. “I’m going to say it was all about organization. A guy named Charles Finney recreated the American revival and made it into what we know it as today — a highly organized and highly effective movement.”

According to Jortner, Finney stewarded Evangelical organizations for revival that were later used to conduct social reform.

In 2012, Jortner published his book, The Gods of Prophetstown: The Battle of Tippecanoe and the Holy War for the American Frontier.

“(The Gods of Prophetstown is) a hidden history about the Shawnee prophet Tenskwatawa, the brother of Tecumseh,” he said. “He probably organized the most significant resistance to U.S. control of Indian lands in the history of the U.S. … He essentially created a Native American city out there.”

Jortner said his book was about both Tenskwatawa and William Henry Harrison, a U.S. territorial governor and ninth president of the United States who led a military strike against Prophetstown.

“It’s looking at those two men, and how religion influenced how they saw the world and what they did,” he said. “Ultimately, I think it’s about how the War of 1812 was actually really important, and we just don’t remember it because we lost to Canada.”

But for Jortner’s lecture today, he said his primary goal is to discuss the gradual shift of social movements, as opposed to rapid change.

“These are changes that took a century to take place, sometimes,” he said. “I think that’s a valuable lesson. It was all locally done work by people who were excited about their faith. They worked at it and worked at it. A lot of them lived and died and never saw the broad changes that they initiated. But the changes did happen.”