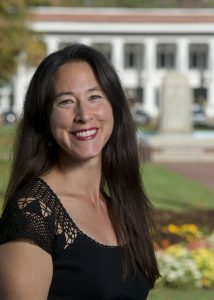 Year-round, there’s an exchange of local, child-centered, arts-based energy and creativity entering and exiting Chautauqua Institution’s gates, transforming them into gateways of learning and extraordinary opportunity.

Brightly costumed girls and boys from the Chautauqua Regional Youth Ballet — some so tiny one could not help but grin along with them — performed athletically and gracefully on the Amphitheater stage in mid-June.

With eyes wide open and hands in pockets, area students on Visual Arts Gallery Field Trips toured the Melvin Johnson Sculpture Garden and Fowler-Kellogg and Strohl Art Centers before the summer season opened. They finished by rolling up their sleeves for a hands-on, exhibit-related arts project.

The kids who took part — for the first time ever at Chautauqua — in “Link Up: The Orchestra Sings,” played the recorder with the Chautauqua Symphony Orchestra and sang in an Amphitheater concert in late June that culminated a music education program provided by Carnegie Hall’s Weill Music Institute. How cool is that?

These are just three performing and visual arts opportunities offered on the grounds during the month of June for local children that Deborah Sunya Moore oversees as Chautauqua Institution’s vice president of performing and visual arts. There are also arts education experiences offered off the grounds in June, as well as throughout the school year.

At 9:15 a.m. Thursday at the Chautauqua Women’s Club, Moore — who introduces many of the evening performances on the Amphitheater stage — will talk “All About Chautauqua Arts.”

In addition to the programs mentioned above, she’ll discuss Chautauqua Opera Company’s Opera Invasions in local schools, the Young Playwrights Project and the “Sing Me a Story” and “I Can Drum” school residencies for students with and without disabilities.

“The arts is the department that’s year-round, all the time,” Moore said. “Our school residencies begin in September. … We’re going non-stop. We’re already tired, but inspired, in June from all the field trips.”

For teachers in Chautauqua Lake Central School and Jamestown Public Schools, there are the Kennedy Center Partners in Education professional development workshops in arts integration. Moore is a national workshop leader for the John F. Kennedy Center for the Performing Arts.

“Arts education year-round is the most important thing for outside the grounds,” Moore said. “(We’re) gaining the trust of the schools and teachers around. It’s how we want to grow, (as a) resource for where we are locally, in addition to being part of the national conversation.”

A year ago, Chautauqua hired Suzanne Fassett Wright as its first-ever director of arts education.

“I’m proud of … setting the vision for the arts through all the evolutions of departments and leadership,” Moore said. “I’m really proud of the artistic leadership I’ve been able to bring here — building on the legacy before us. For me, that’s Marty (Merkley). Growing artist excellence while growing programs.”

With over 600 employees in the arts, and several programs for which Moore is personally responsible — including but not limited to the popular, family and Sunday afternoon entertainment series in the Amp, three production crews, and transportation for performers — there are no typical days. Instead, there are “daily needs” that one would never expect.

Moore said she has grown the performing and visual arts program enough so that it’s aligned with the Institution’s new strategic plan. She’ll talk about how the arts are aligned with it.