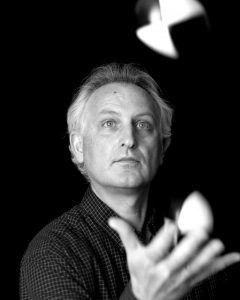 James Geary thinks wit can serve as a tool to navigate the world’s complexities — just one way Geary has come to understand the “serious business” of joking around.

Geary, deputy curator of the Nieman Foundation for Journalism at Harvard University, and the author of Wit’s End: What Wit Is, How It Works, and Why We Need It, will speak at 10:45 a.m. today in the Amphitheater. Geary will continue Week Six’s theme, “What’s Funny? In Partnership with the National Comedy Center.”

“Wit, strangely, is timeless and timely,” Geary said. “Wit is something that has always been around. I don’t think wit changes much because it’s an innate characteristic and quality of the human mind. But I think what has been lost in the understanding of wit is the more serious side of it and the role wit plays in innovation, discovery and in society.”

Geary has been fascinated with reading and writing since he was a child, and has since written several books on various elements of language, such as The World in a Phrase: A Brief History of the Aphorism and I Is an Other: The Secret Life of Metaphor and How It Shapes the Way We See the World.

“I try to use my books to understand and explain these things in a broader sense, such as how metaphors operate in daily life,” he said. “Everybody uses metaphors all the time; it’s astonishing when you see how many metaphors are in even the simplest sentences.”

Geary said the same “everyday aspect” also applies to the use of wit. According to him, being witty is within anyone’s grasp.

“When we think wit, we think of Stephen Colbert, Samantha Bee, Jimmy Fallon, and yeah — those people are witty, but actually you and I are very witty, too,” he said. “Wit is a fundamental form of intelligence that we innately have as human beings. We are constantly living by our wits, which is what I will explore in my lecture.”

“If you understand wit from that perspective, it’s a form of intelligence rather than just a sense of humor,” he said. “It’s more a state of mind than a sense of humor. Humor and laughter is definitely a part of it, but it’s not all of it, and in some respects, it’s not even the most important part of it.”

For as long as Geary can remember, puns have been considered the lowest form of wit, a “painful fall from conversational grace.” However, after further examination, Geary said he considers puns an essential aspect of the art.

“Puns, for me, are a very high form of wit,” he said. “A pun shows the human mind’s amazingly nimble and quick ability to make connections. If I were to make a pun right now, you would get it immediately. I wouldn’t need to explain it to you. The mind is a pattern-making machine and a pun is a form of pattern.”

The person on the receiving end of a pun is just as witty as the person telling the pun, Geary said. To understand a pun, one must unfold the primary meaning of a word or phrase and quickly connect it to the secondary, underlying meaning.

Geary worked for TIME magazine from 1993 to 2006, first as a Netherlands-based stringer, then as a writer, senior editor, deputy editor and then editor. Since moving to the Nieman Foundation full time, Geary has contributed to publications such as The Atlantic, The Washington Post and The Huffington Post. From a journalistic standpoint, Geary said wit acts as the foundation for “good, thorough work.”

“Wit is about making connections, which is what journalists do; they report on stuff, they find stuff out and then they connect the dots,” he said. “Journalists are using their wits all the time to report, discover facts and connect the things that reveal the connections that often remain hidden — or at least what people hoped would remain hidden.”

From the three points in his book, Wit’s End: What Wit Is, How It Works, and Why We Need It, Geary said he hopes Chautauquans take away the message behind “why we need it.”

“ ‘Why we need it’ has to do with the biggest challenges we face today: the environment, the economy, race relations, this sort of partisanship that’s out of control — those are really complex issues and to address them, you need to connect a lot of dots and you need to make a lot of connections,” he said.

But Geary said making connections is a lost art in modern-day America. He said people have been retreating into “silos of thought and information,” when instead, they need to step outside of those silos and open themselves up to information from all sources.

“Wit is an essential part of doing that,” he said. “There is a lot riding on how we address, or fail to address, some of the biggest challenges as a country, as a society and as a planet. We shouldn’t be scared out of our wits. We need to be scared into our wits.”