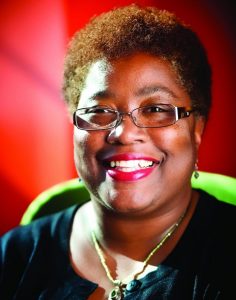 Julie Washington has devoted her career to leveling the playing field in America’s public education system — filling in the gaps that separate lower income, African American students from the academic achievements of their white counterparts.

Washington, professor and chair of the Department of Communications Sciences and Disorders at Georgia State University, will speak at 10:45 a.m. today, July 24, in the Amphitheater. Washington will continue Week Five’s theme, “The Life of the Spoken Word.”

Washington earned her doctorate in speech and language pathology from the University of Michigan in 1989.

At the time, Washington was interested in language and assessment, until she became concerned with the overrepresentation of African American children in special education programs.

In the City of Ann Arbor, Michigan, Washington said many students in the local school districts, special education or not, were “struggling” academically.

“Once I got into schools, I realized what a huge issue literacy was,” she said. “I got interested in how the dialect impacted these reading outcomes. It’s been an issue for them for a long time.”

But it wasn’t until Washington moved to Atlanta that she realized how large of a role dialect plays in academic struggles — and this holds true for students of all socioeconomic statuses.

Now, Washington is a principal investigator on the Georgia Learning Disabilities Research Innovation Hub, funded by the National Institutes of Health.

“The national statistics show that eight out of 10 are reading at a basic level or below, so it’s really hard in that community to identify kids who are reading not just because they are poor, but because they have disabilities that need targeted assistance,” she said. “The goal of the work we are doing now is to figure out how to identify those kids and where our instruments aren’t sensitive enough to tell the difference between poverty and disability.”

“One of the things we have learned is that not all kids from low-income backgrounds are going to have difficulties; it’s the kids for whom the distance between the language they use and the literate standard is the widest — those are the kids having trouble learning to read and write,” she said. “So, it’s not everybody, but those kids we call ‘high dialect’ users.”

Even though the statistics confirm what she has seen in classrooms from Michigan to Georgia, Washington said the results did not provide a plan to better the situation for high dialect users.

“I think what we have learned is that this is a major public health issue in communities,” Washington said. “We just don’t have access to adequate intervention and it’s not because the resources don’t exist, it’s because the ability to identify and diagnose is so poor. We have work to do, and in a country like ours where we really value literacy, that’s a real disadvantage.”

Washington hopes the racial divide in literacy issues becomes a more widely understood topic in the United States, which is why she is focusing her lecture at Chautauqua on the subject.

“I think it’s a real opportunity to reach a very different audience and to make people aware of some of the things we’re dealing with because the dialect, in particular, has a lot of stigma attached to it, and there has always been — it’s low prestige, people don’t understand it,” she said.

Ultimately, Washington’s message is this: Literacy issues are everyone’s issues.

“We can’t just talk about poverty and we can’t just talk about the variables that most of us don’t have the power or ability to do much about,” she said. “This is something we can do something about, and there are variables we should all be concerned about. This is not just a black problem, this is not just a poor problem, this is everybody’s responsibility.”