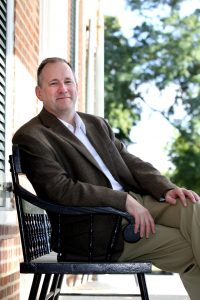 It was Theodore Parker, a 19th-century abolitionist and Unitarian minister, who once said, “the arc of the moral universe is long, but it bends towards justice.”

Philip Gulley says that there’s nothing to suggest that sentiment is true.

At 2 p.m. today, July 26, in the Hall of Philosophy, Gulley will conduct Chautauqua’s fifth Interfaith Friday on the problem of evil and the Quaker response to it. Gulley will be joined in conversation by the Rt. Rev. V. Gene Robinson, Chautauqua’s vice president of religion and senior pastor.

“Quakerism is so theologically diverse,” Gulley said. “We have evangelical Quakers, we have Quakers who are atheists. Some Quakers would look at this problem and say, ‘Well, evil is vanquished when Jesus comes again. He’ll descend from the clouds, and some people will go to heaven and some to hell.’ And there are other Quakers who say, ‘There is no heaven and no hell.’ ”

Gulley began down the path that led him to his current writing career back when he was pastoring for a small Quaker church.

“They wanted a newsletter,” he said. “So I began taking writing courses at the Earlham School of Religion in Richmond, Indiana. They really loved my writing, and one of my essays came to the attention of the radio personality Paul Harvey.”

According to Gulley, when Harvey read his essay on-air, it came to the attention of a publisher who offered him a book contract after hearing it.

Fast-forward to 2014, when Gulley published his book, Living the Quaker Way: Timeless Wisdom For a Better Life Today.

“When (Quakers) first began in the mid-1600s, we were quickly an apocalyptic group, as were many other groups started on the heels of the English Civil War,” he said. “We felt the end of the war was near. We had this radical theology and religion that thought we were living in the last days. And that didn’t happen, of course, so we had to evolve into something else — or die.”

While many of the other religious groups of that time gradually faded away, Gulley said that Quakerism lasted.

“What I think caused us to last, was that we were able to make a social and spiritual shift away from apocalypticism, and towards this radical life of holy obedience,” he said. “We believed that life was centered around the Testimonies, which were values like simplicity, peace, equality, compassion and integrity.”

Gulley said those Testimonies were what drew him to Quakerism in the first place, and eventually led to his writing and publishing Living the Quaker Way.

“I decided I’d like to write about the Testimonies,” he said. “I wanted to focus on what it means to be a Quaker today, what animating forces excite us and what it is that we value.”