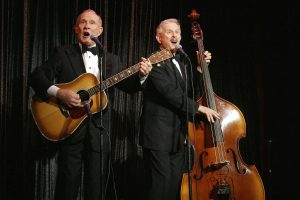 “This is a singing mosquito, and it’s going to sing the ‘12th Street Rag,’ ” Tom Smothers told his brother, Dick. “I know everybody kills mosquitoes. That’s why not very many of them make it in show business.”

Tom Smothers then opened a glass vial and released the singing mosquito, which he described as “a show business first.” After a few lines of “12th Street Rag,” applause filled the studio and small television screens nationwide. After joining in the applause, Dick Smothers opened his hands — he had squashed the imaginary singing mosquito.

The bit opened the fifth episode of the first season of Emmy Award-winning “The Smothers Brothers Comedy Hour,” in 1967. After three seasons on CBS, filling the same time slot as NBC’s “Bonanza,” and later “Rowan & Martin’s Laugh-In,” the CBS network canceled the folk-singing comedy act in 1969, claiming the Smothers Brothers violated their show’s contract with the network. Thus, the wildly popular sibling duo was squashed — but not for long.

April marked the 50th anniversary of the cancellation that launched popular television audiences and media professionals into a decades-long, ongoing reevaluation of free speech and political satire.

Opening Week Six, “What’s Funny? In Partnership with the National Comedy Center,” Tom and Dick Smothers, who over the years have performed at Chautauqua and the Lucille Ball Comedy Festival in Jamestown, will be joined by David Bianculli at 10:45 a.m. today, July 29, in the Amphitheater. Bianculli, television critic for NPR’s “Fresh Air” and author of Dangerously Funny: The Uncensored Story of “The Smothers Brothers Comedy Hour,” will interview the Smothers Brothers in a special presentation, “The Smothers Brothers Reunited: Comedy and Censorship on the 50th Anniversary of their Network TV Firing.”

“This year marks 50 years after CBS fired the Smothers Brothers, bringing their variety show to an end — a show that, through satire, protested the war, combated racism and mocked the president,” said Matt Ewalt, vice president and Emily and Richard Smucker Chair for Education. “There was intense political pressure to shut them down and a push to gain stronger governmental control over broadcast media. We’re honored to have the Smothers Brothers back at Chautauqua to mark this moment, reflect on the role of satire in our culture and democracy, and to spark a larger conversation on these grounds about free speech and speaking truth to power.”

After being canceled, which Tom Smothers later described as being “fired,” the Smothers Brothers filed a suit against CBS in the U.S. District Court in California — Tom Smothers et al. v. Columbia Broadcasting System, Inc. The court found CBS to be in violation of its contract with the Smothers Brothers — not the other way around. In a counter suit, CBS claimed “the entertainers had violated their contracts when they did not deliver programs that conformed to CBS practices and standards,” The New York Times reported on April 7, 1973.

“By becoming unexpected martyrs to the cause of free speech, the Smothers Brothers lost their most influential national TV platform just when that freedom mattered the most,”  Bianculli wrote in Dangerously Funny.

Born on Governors Island, New York, in 1937 and 1939, respectively, Tom and Dick Smothers moved to California with their family, where they graduated high school and attended San Jose State College. They began their comedy careers on the Purple Onion stage in San Francisco, singing folk songs — Tom on guitar and Dick on stand-up bass — and telling sibling jokes.

But their professional routines evolved, and they eventually appeared on late night programs and their famed “Comedy Hour,” satirizing the U.S. government in protest of the Vietnam War, and, as Bianculli puts it, as a way of engaging “the generational, artistic, and moral duels being fought in the ’60s.” After the show’s cancellation, the Smothers Brothers performed across the country, at festivals and on Broadway, until they announced their public performance retirement in 2010.

“Year to year, the shows said it all: Tom and Dick Smothers looked different, acted differently, and protested more brazenly and passionately,” Bianculli wrote in Dangerously Funny. “What they managed to say and do was important, and what they were prevented from saying and doing was no less meaningful.”