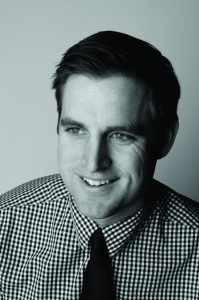 Spencer McBride looks at American history through the lens of “the way that society impacts religion, and the way that religion impacts society.”

“I think about the Burned-over District as this very significant time and place,” said McBride, a historian, author and documentary editor for The Joseph Smith Papers. “What happened in terms of religious revivalism and social reforms in 19th-century America are still felt to this day. It was absolutely essential to the development of American society as we know it today.”

At 2 p.m. today, July 22, in the Hall of Philosophy, McBride will draw attention to this historical event through his lecture, “The Origins and Legacy of the Burned-over District,” part of the Week Five interfaith theme, “Chautauqua: Rising from the Ashes of the Burned-Over District.”

“For the Burned-over District, in terms of chronology, we’re talking about the years 1790 to 1860,” McBride said. “And we’re talking about Western New York, which includes the Adirondacks and the Catskill Mountains, but also to an extent Albany and the Mohawk River Valley.”

The Burned-over District refers to the state of New York during the Second Great Awakening, a Protestant religious revival that took place in the early 19th century.

“It was a time and place where the religious revivalism of the Second Great Awakening was happening in particularly high concentration,” McBride said. “This surge in church membership and religious participation throughout the United States was happening in a big way in Western New York.”

McBride said he plans on discussing how the Burned-over District came to be, why New York experienced such a high concentration of religious revivalism and the legacy of that revivalism — a legacy which McBride says Chautauqua is a part of.

“We see that along with the high concentration of religious revivalism in New York, there was a corresponding high concentration of social reform movements,” he said. “The revivals were happening across the country, not just New York. Same with social reform movements such as the abolition of slavery, women’s suffrage and the temperance movement.”

According to McBride, the establishment of Chautauqua was a result of larger, regional movements.

But McBride said that in the 1800s, Sunday schools were mainly about providing literacy training and education for underprivileged people.

For his lecture today, McBride said he plans on using the history of the Burned-over District as a prologue to explain Chautauqua’s existence, and its origins in the Sunday school movement.

“This is not only a Western New York story,” he said. “That region epitomizes these broader movements.”