To keep track of the web of themes, communities and multiple sources that overflow in her 2018 book Dopesick: Dealers, Doctors, and the Drug Company that Addicted America, Beth Macy papered her office with Wizard Wall. It was onto those adhesive dry erase sheets that Macy, like a dogged detective hounding a slippery criminal, visually grouped her research on the opioid epidemic, from Roanoke, Virginia, where Macy lives now, to Appalachia, the suburbs and beyond.

“I just started interviewing everyone I could think of,” Macy said. “One person would lead me to another and to another.”

A journalist, New York Times-bestselling author and the first Chautauqua Literary and Scientific Circle author for Week Two, “Uncommon Ground: Communities Working Toward Solutions,” Macy will discuss her work at 3:30 p.m. today, July 3, in the Hall of Philosophy.

Her talk will cover the trajectory of heroin and fentanyl abuse in the United States and the treatment that still fails to benefit the most desperate — information that fills the pages of Dopesick. She will also focus on new, solutions-based reporting she has conducted since finishing the book over a year ago.

That was one of the reasons Atom Atkinson, director of literary arts, and the CLSC team chose Macy for today’s talk.

“Part of what we found in reading the book is not only that it’s extraordinarily well-written and extraordinarily necessary, but also that it’s very much engaged with the question of how and why people and whole communities fall through the cracks,” Atkinson said, “and what we even mean by that cliché.”

The stories Macy will share in her lecture feature “people getting out of the silo and coming together,” she said. “This work hinge(s) on people willing to change their minds when new data presents itself. Shock among shock.”

Dopesick, which was shortlisted for the 2019 Andrew Carnegie Medal for Excellence in Nonfiction, is Macy’s third work of critically lauded, long-form reportage. Her 2014 book Factory Man: How One Furniture Maker Battled Offshoring, Stayed Local — and Helped Save an American Town and 2016’s Truevine: Two Brothers, a Kidnapping, and a Mother’s Quest: A True Story of the Jim Crow South both center real, marginalized individuals.

Yet Dopesick, which draws extensively from first-person testimony from patients and family members, proved to be more of a challenge than Macy’s two previous books.

For one thing, there was the ever-evolving nature of the crisis.

“(Factory Man and Truevine) both took place in the past,” Macy said. “This is unfolding before my eyes. Most of the last third of (Dopestick) hadn’t happened when I signed the book deal. I had to be nimble and quick on my feet.” 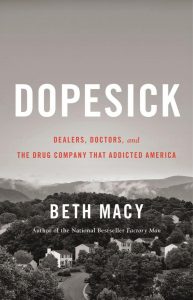 She also had to process the pain and agony of her sources, as well as her own grief.

“It’s always been my greatest strength and my biggest Achilles: getting close to people,” Macy said.

A longtime reporter for The Roanoke Times, Macy always had her notebook when reporting for Dopesick, and ensured her sources knew it. Still, the relationship between interviewer and interviewee — particularly as it pertains to the story of Tess Henry, a woman whose struggle with addiction and eventual death is detailed in the book’s final third — is not a simple one. She estimated that she interviewed Tess’ mom, Patricia Mehrmann, to whom she remains close, “hundreds of times.”

“There were certain things that happen in this book where I had to put my notebook away and be a human being,” Macy said. “There is no guidebook to tell you what to do when your main character is brutally murdered.”

It’s an approach Macy admitted she could be criticized for.“

“But how else could I have done that story justice? … This story is such an internal story that you just have to get into the grist of the matter,” she said.

If, magically, Macy could assign every high school student in the United States a section of Dopesick, she would choose Tess’ story.

“You really learn (about the opioid crisis) from the ground,” she said. “That’s the way I think people learn. And I also think you learn when you’re moved. (Tess is) just an everyday girl. Her father is a surgeon; her mother is a nurse. She had many more advantages than most people in America.”

Immersed in frustration and heartbreak for so long, Macy said her solutions-based reporting helped her escape what she dubbed “the post-Dopesick funk.” She sees, with higher instances of urgent care for the addicted, for example, that “people are starting to get it.”

“The stigma is beginning to lighten a little,” she said. “I’m grateful for whatever extent the book can be credited for opening hearts and minds.”

While she is at Chautauqua, Macy will participate in a filmed roundtable discussion with local mental health, medical care and poverty work professionals and advocates. After the season is over, Atkinson and the literary arts team will package that video into an accessible educational resource.

Moving forward, Macy hopes to witness a more proactive approach to fighting the grip opioids have on the United States, a reaching out that happens before people commit crimes to feed their addiction. In doing so, “you just have a much better outcome for the person and a better outcome for society,” she said. “There is no community in America where this isn’t a problem now.”