The holy object at the 9:15 a.m. Tuesday Ecumenical Worship was an eraser.

“There was always an eraser on the top of the refrigerator in my house growing up,” said the Rev. Zina Jacque.

Jacque was the first surviving child of Willa and Wiley Jacque and said she was “taught the ways of Christ as a child.”

When she or her sister got in trouble, there was punishment, like not being able to go out to play for a week.

“After it was all over,” Jacque said, “my 6-foot-4-inch, 280-pound father put my 6-year-old self on the countertop and my mother ceremonially handed me the eraser. I would mime erasing my sin and say, ‘I took that $5 out your purse, and I did not find it in the Frosted Flakes buried in the middle of the box.’ ”

Then, Jacque said, “I would say ‘I erase that I stole the money, and I remember that stealing is bad.’ And the incident was never spoken of again.”

In human life, Jacque told the congregation, all have fallen short and we are justified by grace in Jesus Christ.

“We are blessed that our transgressions are not counted against us,” she said.

An eraser seems to have no place in the world today, Jacque said: “We can’t seem to be made fresh and new.”

Many people grow up being told they are not good enough and never will be.

“I was told that women can’t preach and my standing here today is a sin,” Jacque said.

But, she continued, “God’s grace is sufficient to wipe away any sin. God’s grace brings healing when we feel shackled underneath a load of sin and shame. That sin was nailed to the cross.”

When someone puts the “stink” on you, Jacque said, “find an eraser in your home and remember that Jesus put your sin as far from you as the east is from the west. You are free; grace is real and your sin is erased.”

Jacque asked the congregation to think of a person in public life who, if they sat down beside you, would prompt you to change your seat.

“What allows you and me to have an eraser as an everyday prop is the grace that comes with repentance, because then we are made free,” she said.

Sometimes we feel that we don’t have to forgive the public person if they are still unchanged, Jacque said.

“The capacity to erase sin is not dependent on them,” she said. “We have to be in dialogue, to invite them in and offer grace.”

Our eraser is one of invitation because “the world needs the possibility of forgiveness and reconciliation,” she said. “We are called to pray for the possibility of an eraser moment. It is no failure if the person does not ask for forgiveness. You have no idea what seed you have planted.”

Trust God with the eraser, Jacque said, as God’s word is true and God does desire to put our sin as far away from us as the east is from the west.

“We are eraser bearers,” she said. “We offer the invitation to others to come close to be made whole. We go into the world through the power of the one who said ‘all things are made new in me.’ Be eraser bearers.”

The Rev. Carmen Perry presided. Elizabeth Waters, a resident assistant with the International Order of the King’s Daughters and Sons and a recent graduate of West Virginia University in Parkersburg, West Virginia, read the Scriptures. The Motet Choir sang “The Lord’s Prayer,” by John Tavener. Jared Jacobsen, organist and coordinator of worship and sacred music, directed the choir. The Rev. Zina Jacque introduced her home pastor, who signed her ordination certificate, the Rev. Jeffrey Brown, who spoke at the 10:45 a.m. Tuesday morning lecture in the Amphitheater. The Randell-Hall Memorial 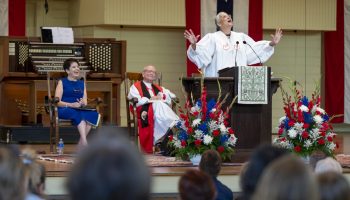 Zina Jacque: Jesus pairs us with people who will help us shift, change, emerge and grow