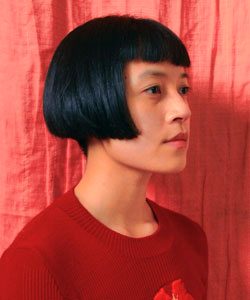 The ghosts that haunt the 2019 winner of The Chautauqua Janus Prize emerged, as subjects of great literature often do, from “an imaginary affair with Emily Dickinson.”

My Tran’s “Tree rings, like concentric ghosts” — a poetic, multidimensional piece published in the Spring/Summer 2019 issue of Black Warrior Review — began in a study of Dickinson’s poems and fascicles. The American poet’s handwritten dashes, and the “dazzling field of energy” they created, led Tran to sentences, which led to topics, which then led to research. The sum of that elliptical process would become “Tree rings,” the second-ever piece to win the Janus Prize.

“I’m very erratic in my thinking, so that led to a lot of rabbit holes,” Tran said. “Sometimes they’d form tunnels and connect. I was hoping to find a lot of tunnels. And they kept leading me to my grandmother; my mother tongue, Vietnamese; and the troubles of ghosts.”

The Chautauqua Janus Prize celebration, situated within four days commemorating the Chautauqua Literary and Scientific Circle Class of 2019, will commence at 7 p.m. today, August 5, in the Athenaeum Hotel Parlor. Atom Atkinson, director of literary arts, said they were happy to provide a space during Recognition Week for the Janus Prize, an award now in its second year and made possible by a generous donation from Barbara and Twig Branch, honoring a writer whose short prose unsettles convention.

“I think it’s great that we’re celebrating, alongside this incredible tradition, an emerging author who still hasn’t published their first book,” Atkinson said. “And celebrating them with a week-long residency and $5,000 — that’s pretty nice.”

Inside the evening, Tran will offer a lecture on translations — “not just the kind that happens between languages, but also the kinds that arise between people and animals, readers and fictional characters, ghosts and the living” — that will center the story of J-35, an orca who continued to swim with her calf’s body 17 days after it died.

“Here’s a moment that is so difficult to translate well — how to put into language a whale’s sadness, if we can even call it sadness?” Tran said. “I think it’s so important to stay with this difficult moment. There is an intensity that unravels knowing when we return to a place that refuses to make sense, or be sensed. And this return shapes the kind of prose that I write. It’s fragmented and a bit nonsensical.”

It was, in part, Tran’s unbridled imagination that captivated Vi Khi Nao, a Week Three writer-in-residence and judge of the 2019 Janus Prize. Nao, the author of 11 books, cited Tran’s “precise and abstract” language, as well as their varied sentence structure and superior editing, as reasons for awarding the prize to “Tree rings.”

“The piece leaves room for interpretation,” Nao said. “A lot of the (submissions) I read were too concrete — (the readers’) exploration is limited. They were beautiful potentials but not complete. (Tran’s) keeps on growing within language. It doesn’t lobotomize your experience.”

Tran’s title — an invocation of ancestry and beauty — was Nao’s first sign that the piece contained the kind of unexpected prose through which readers could wander.

“I’ve never thought of trees as phantoms before because they’re such alive objects,” she said. “To say that tree rings are like concentric ghosts showcases (Tran’s) ability to make associations that are very deep.”

For Stephine Hunt, manager of the CLSC Octagon, Tran’s title was a metaphor for encountering the “innovative” piece.

“(Tran’s piece) suggests a haunting that remains with you after reading it, and certainly suggests a concentric circle in the way that you experience the reading of it,” Hunt said. “An initial reading of it, the thought of it afterwards, a re-reading if you can — you should — and beyond that, the analysis of it, et cetera. It is just a really beautiful piece of work. I think Vi Khi Nao did a great job in her selection.”

In such a physically concise piece, Nao finds room for radical collisions and novel connections.

“The piece moves emotionally and psychically through so much linguistic space,” Nao said. “Each time I read it, I discover something new, something deep and profound in the way (Tran) composed sentences. It could easily become a really strong, compelling manuscript.”

With their prize money, Tran plans to continue to develop the “still growing” piece and produce the play that now stands as the latter section of their manuscript. Counting the Canadian poet Anne Carson, the nature television series “Blue Planet” (I and II) and “what gardeners and architects have to say” among their inspiration, Tran has a “wild hope” that “literature can make some sort of difference in this critical time.” But they also hold within them “an intense hopelessness” — a tension they see in José Muñoz’s Queer Utopia and Lee Edelman’s No Future.

“Both writers put us in the position of continuing in an impossible place — Muñoz with hope of never arriving, and Edelman with hopelessness of always arriving at the same place,” Tran said. “And yet their words propel, and there is so much movement in both texts. I guess I hope things will keep moving.”