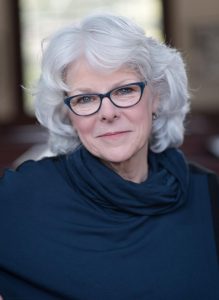 She’s Episcopalian — not Roman Catholic, not Pentacostal and not Mormon.

But even with the panoply of Christian denominations, the Rev. Dr. Barbara Brown Taylor said she wants to “do her best” to speak about grace from a Christian perspective in a way that will enable listeners to think about grace for themselves.

“I want people to ask, ‘Does God’s grace preempt free will?’ ” said Taylor, an author, Episcopal priest, professor and theologian. “ ‘Does it reward the crooked and ignore the righteous?’ There are a lot of interesting theological questions about divine grace, something which does not behave by human standards.”

At 2 p.m. today, August 6, in the Hall of Philosophy, Taylor will discuss “Alarming Grace: A Christian Perspective,” part of the Week Seven interfaith lecture series, “Grace: A Celebration of Extraordinary Gifts.”

Taylor has served as Chautauqua Institution’s chaplain of the week five times, and was awarded the Chautauqua President’s Medal in 2016. In 2014, TIME magazine added Taylor to its annual TIME 100 list of the most influential people in the world, and her book Learning to Walk in the Dark was featured on TIME’s front cover.

“I wrote Learning to Walk in the Dark for the same reason I write most books, and that is: I hear the same thing coming up with people I talk to, or in the emails I receive, or in the news,” Taylor said. “What I was hearing a lot about before I wrote that book, was people feeling lost; that they were in the dark — about faith, about the future of the world, about politics.”

Taylor said she “particularly picked up on” the crisis of faith she said she kept encountering.

According to Taylor, being “in the dark” can mean many different things.

Taylor said she hopes her audience today “will come out (of the lecture) with better questions than they had before they came in.”

“I am always interested in asking questions that cause people to rethink their certainties and freshen their ideas,” she said. “I would hope that my audience will take away some disturbing and challenging thoughts about divine grace.”