Hardy Merriman to Inspire Hope Through Stories of Nonviolent Resistance 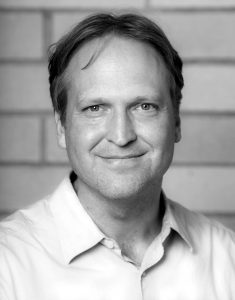 In a world roiled by conflict, Hardy Merriman wants to project a message of hope.

“I want to talk about the emerging challenge of rising authoritarianism in the world, and declining democracies,” said Merriman, an author and president of the International Center on Nonviolent Conflict. “I’ll talk about how nonviolent and civil resistance movements are a critical aspect of reversing the trend of declining democracy.”

At 2 p.m. Tuesday, August 13 in the Hall of Philosophy, Merriman will discuss “Power From the Bottom Up: Civil Resistance as a Driver of Rights, Freedom and Justice.” Merriman’s lecture is part of the Week Eight interfaith lecture series, “The Power of Soft Power.”

“Hard power is often defined as ‘either the threat or use of violent force,’ ” Merriman said. “Nonviolent movements, by definition, do not do that. However, they wield a great deal of power.”

Merriman said to look no further than Sudan or Algeria as examples of such movements.

“In Sudan, the fall of a dictator who was wanted on charges of genocide was initiated by a nonviolent movement,” he said. “We saw the fall of a longtime autocrat in Algeria earlier this year. These are just a few examples.”

In America, Merriman pointed to the nonviolent resistance movements of the Civil Rights era.

“For people who say that violence is the most effective or the most powerful way of achieving their goal, that’s actually historically not true,” he said. “For most people who faced oppression, nonviolent resistance has been more effective and powerful.”

Merriman said the United States has been behind the rest of the world in recognizing the critical importance of nonviolent movements.

“Most national affairs experts have underestimated how important these movements are,” he said. “We know statistically that the number of these movements worldwide is growing. We know that they’re shaping things. Ignoring them, or not knowing how to respond, is to our detriment.”

In 2007, Merriman co-authored A Guide to Effective Nonviolent Struggle, a book that was intended to codify nonviolent resistance strategies.

“We can say, ‘OK, if this is a social science, then what are the key attributes of movements that succeed, and what are some of the key attributes that lead to their failure?’ ” he said. “We can study that, and develop frameworks that increase their chances for success. That’s what I’ve spent my career trying to do.”

For his lecture today, Merriman said he wants people to know that there is “really exciting potential here.”

“There’s some good news in the world,” he said. “At the same time, we really have to meet the challenge of rising authoritarianism in the world as well. It’s incumbent upon us to figure out how we can better support human rights movements around the world.”