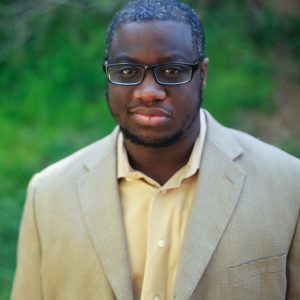 As Rion Amilcar Scott introduced his short story, “A Loudness of Screechers,” on Sunday in the Hall of Philosophy, he issued a warning to the audience.

“This is narrated by a 16-year-old girl, so please use your imagination,” he said.

Stretching the boundaries of belief is a requirement when encountering Scott’s work — both his 2016 book of stories, Insurrections, and the forthcoming The World Doesn’t Require You inhabit the fictional Cross River, Maryland, a town established in 1807 at the site of the only successful slave revolt in the United States.

As Week Seven’s prose writer-in-residence at the Chautauqua Writers’ Center, Scott will meet with those in his workshop, “I’ll Build Me a World,” for a final time today, as well as offer a Brown Bag lecture at 12:15 p.m. today, August 9, on the porch of the Literary Arts Center at Alumni Hall.

Scott described his talk, “What the World Requires of You,” as interested in a framework for world-building that is inclusive of subjects and experiences one might consider “mundane or boring” — teenagers playing basketball, an older man who spends his days watching reruns of “Good Times” or a chess match between a father and daughter.

“(World-building) is taking the things we think are just the stuff of our lives and making them bigger,” he said. “Like your favorite song when you’re 13. And my process is not strictly realistic; it really is a lot of taking from my feelings and emotions.”

He cites Wild Seed, Octavia Butler’s classic science-fiction novel about two immortal Africans in a time-bending battle for supremacy, as an influence. The oeuvre of Edward P. Jones, whose first and third book — Lost in the City and All Aunt Hagar’s Children, respectively — are collections about Washington, D.C.’s black community, also contain, according to Scott, a world that is “realistic, but feels otherworldly and mythic in a lot of ways.”

Scott dedicated his time at the Hall of Philosophy dais on Sunday to his mother, who passed away in March. He credited her for encouraging him to pursue writing — “the journey that shaped his life” — and recalled a day when he, as a young boy, ad-libbed poetry while she drove him to soccer practice.

“She told me to go type (my poem) up,” Scott said. “I think it’s an act of love, to encourage someone like that.”

He looks to his own children for moments of inspiration, going no further than the sight of his eldest son riding a scooter by their house.

“Just the idea of trying to keep a childlike wonder alive,” he said, “it’s really hard to do.”

On Sunday, Scott said his mother used to tease him about the mystical, unearthly tinge to his work, asking him where he inherited such a wonder-filled approach to writing.