In Interfaith Lecture, Heather McGhee to Argue for Overcoming Prejudices 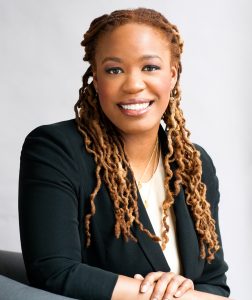 Heather McGhee was a guest on C-SPAN’s “Washington Journal” when she received a call from a white male listener who was openly racist.

But instead of issuing a hateful diatribe, this caller frankly admitted his preconceptions, and asked McGhee for advice on how to overcome them.

“What can I do to change, to be a better American?” disabled Navy veteran Garry Civitello asked McGhee, an author and senior fellow at the left-leaning think tank Demos.

McGhee’s tender response represented a rare moment of kinship between disparate groups that reverberated across the internet and led to a genuine friendship.

At 2 p.m. Wednesday, August 14 in the Hall of Philosophy, McGhee will discuss the story of her friendship with Civitello and more in her lecture, “Beyond the Zero-Sum: Building a New American Demos.” McGhee’s lecture is part of the Week Eight interfaith lecture series, “The Power of Soft Power.”

“There’s a need for soft power as we try to overcome racism and division, and as we forge a united American people,” McGhee said. “This question of ‘what does it mean to be a better American in the 21st century, in an era of demographic change?’ is part of the conversation and talk I’m going to have.”

McGhee grew up in Chicago’s South Side at a time of economic upheaval.

“I started asking questions about why so many people were unable to get ahead no matter what they did,” she said. “That led me to the rules and the policies that shape opportunity.”

Eventually, McGhee said she was able to get an entry-level position at Demos, rising through the ranks to become the think tank’s president in 2014.

Though she stepped down as president in 2018, McGhee is now a distinguished senior fellow at Demos, and she’s currently working on a book, to be released in May 2020, on the many ways racism is harmful to society.

“It’s harmful not just for people of color, which is how we usually think about it, but it also distorts our entire society, our economy and our democracy,” she said. “So it has costs for white people as well.”

McGhee hopes her lecture today will inspire her audience to “bridge the racial divide.”

“We can overcome our biases and prejudices,” she said. “There’s a way for us to define who is an American that’s inclusive and still has meaning. There are people working against a tide of division and hate to make a fairer and more inclusive country for us all.”