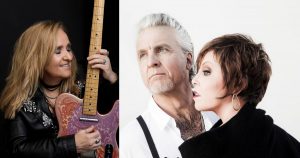 When Melissa Etheridge — a Grammy and Academy Award-winner, as well as the singer-songwriter responsible for the six-time platinum album Yes I Am — pitched her first record to radio stations, those in charge would respond in a similar fashion.

“They’d say, ‘Oh, I’m sorry. We can’t play her — we’re already playing a woman,’ ” Etheridge told Fredda Gordon in an interview for InFocusVisions Music Magazine. “But, you know, it’s still difficult. You have to work really, really hard. It’s one of those last men’s businesses, especially rock and roll. We just do the best we can.”

In the final evening performance of the 2019 Chautauqua Institution season, Etheridge and four-time Grammy Award-winner Pat Benatar — another trailblazing rock ’n’ roll icon — headline a 7:30 p.m. performance Saturday in the Amphitheater. Guitarist Neil Giraldo, Benatar’s collaborator and husband who helped produce the sound that led to Top 10 hits like “Hit Me With Your Best Shot” and “Love Is A Battlefield,” joins the pair onstage.

Deborah Sunya Moore, vice president of performing and visual arts, is “excited” to conclude the season with “two women that have made such a musical mark on America and beyond.”

“The double bill is just going to be thrilling for Chautauqua,” she said. “Talk about going out with a bang.”

In 2017, after returning to Billboard’s Adult Contemporary Chart for her ballad, “Dancing Through the Wreckage,” Benatar reflected on her first Hot 100 hit, 1979’s “Heartbreaker,” in an interview with Fred Bronson for Billboard.

“It was such an exciting time,” Benatar told Bronson. “Neil and I would wait at our local newsstand to get a copy (of Billboard) the day it came out and check the chart positions. Seeing it in print made it seem more real.”

She revealed to Bronson that she and Giraldo have a song list “lovingly” dubbed “The Holy 14.” According to Benatar, if they fail to incorporate that collection of songs into concerts, “they risk a barrage of Facebook unhappiness.”

“We do our best to include them, while inserting deep cuts and new compositions,” Benatar told Bronson. “(Giraldo) is always messing with the arrangements. He’s a mad scientist in this department. Nothing is out of the realm of possibilities. I love it, because it keeps things fresh for us as well as the audience.”

With a career that spans across three decades, Etheridge had to navigate the music business while remaining faithful to her own artistic pursuits. She discussed that balance with Gordon in the InFocusVisions interview.

“I’m grateful that I can make a living off my music,” she said. “Yet I believe, and I truly understand, that my fans want me to make the music that’s in my heart and soul. They don’t want to hear a hit song. They want to know my music. They have followed me. They have taken this journey with me for 30 years, and they want to stay on it like I do.”

In the Billboard interview, Benatar reacted to being characterized as a “role model” for the women artists that followed her.

“I try to help people understand that, as an artist, you do not spend time analyzing how you got to be who you became or when it happened,” she told Bronson. “You were simply being. I wasn’t thinking about the bigger picture, not until much later. I was completely self-absorbed in expressing how I was feeling as a young woman in the 1970s. … I was feeling the general unrest that most American women were feeling. I was simply part of the sisterhood that was emerging from the earlier women’s movement. Those women were the role models.”