Sunday’s Sacred Song Service will be rich in different kinds of music, language and tradition, according to Jared Jacobsen.

It will feature the three world religions, which originated from the prophet and patriarch Abraham: Christianity, Islam and Judaism.

A highlight of the service will be five large paper banners representing the five members of Abraham’s family, designed by artist Nancy Chinn.

“I brought her to Chautauqua to be in residence and just walk around for a week, and I said, ‘We’re putting our toe in the water of this interfaith thing, and I want you to help me with some art,’ ” Jacobsen said. “She soaked up Chautauqua for an entire week, and then she went away and said, ‘Let me see what I can do.’ ”

At 8 p.m. Sunday in the Amphitheater, Jacobsen will present the Sacred Song Service, “The Family of Abraham Lives the Gift of Grace.” The concert will feature the Rt. Rev. V. Gene Robinson, Chautauqua’s vice president of religion and senior pastor, the Chautauqua Choir and the Abrahamic Program for Young Adults coordinators.

“Another thing I came up with is the idea that light is common to all of us, and water is common to all of us,” Jacobsen said. “We are all an ‘oasis people.’ We come from fertile spots in the desert, where, if there’s water, there’s light. And where there’s light, there’s civilization. So I came up with the idea of having three huge candles on the stage, planted in a pool of water.”

Jacobsen said he bought the largest candles he could find for Sunday’s service, which are 6-feet-tall.

“In the beginning of the service, we ritualize the lighting of the candles,” he said. “Instead of a little dinky candle like a candle on a birthday cake, it’s a candle you actually walk up to. It’s a very powerful symbol to watch these Abrahamic kids standing up there together, lighting the candles.”

The coordinators from APYA representing two of the Abrahamic faiths are Anna Grace Glaize, Nikhat Noorani and Safwan Shaikh. Chautauqua’s own Rabbi Samuel Stahl will represent the Jewish faith.

The music to be performed by both the Chautauqua Choir and the congregation is intended to bring adherents of the three faiths together, Jacobsen said.

“There will be hymns for the congregation to sing, with texts that are inclusive and not exclusive,” he said. “A great part of the evening is hospitality, and reaching out.”

According to Jacobsen, “Psalm 133” by American composer Richard Proulx is a “great psalm of hospitality.”

Another song on the program is “The House of Faith Has Many Rooms,” by American organist Craig Phillips.

“I love the image (‘The House of Faith’) evokes,” Jacobsen said. “It’s a beautiful song, and it’s going to be a beautiful concert.” 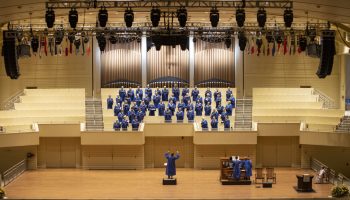 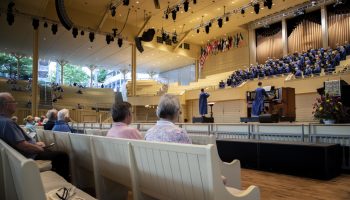