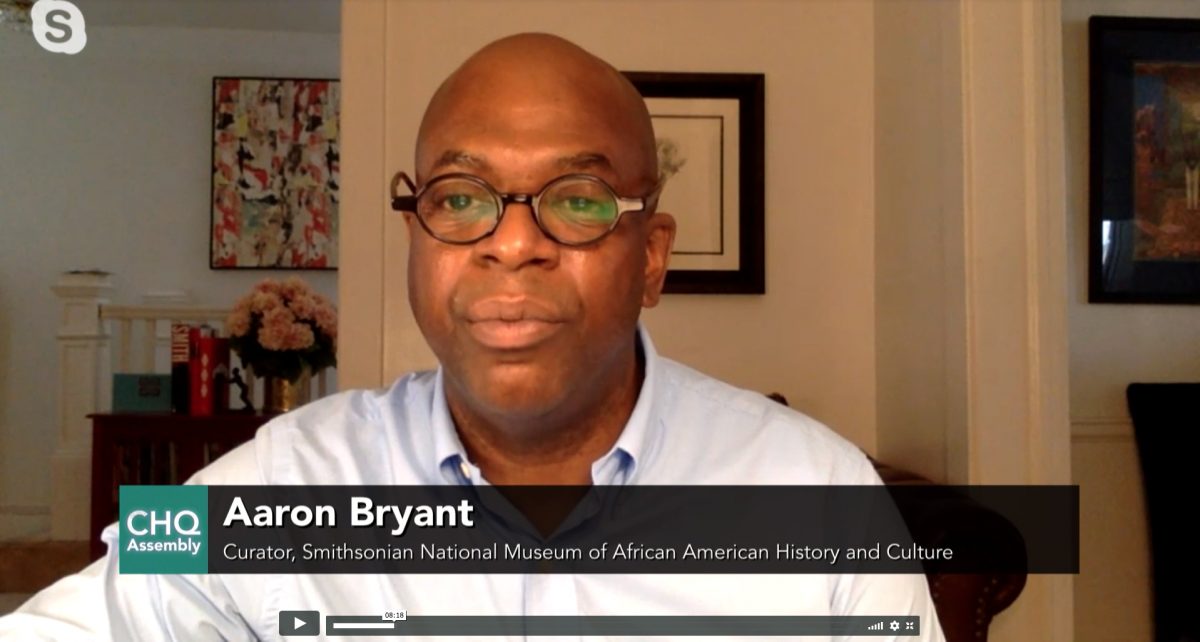 Aaron Bryant, curator of photography and visual culture at the National Museum of African American History and Culture, will never forget the first time he visited a museum. In his art class in fifth grade, every student created a painting based on an illustration, and Bryant’s work of an African market was chosen to represent his school at the Baltimore Museum of Art.

“I remember they had painted Rodin’s ‘The Thinker’ outside of the museum and, as a kid standing next to the sculpture, how imposing it was because I only came up to his knee,” Bryant said. “I’ll never forget how I was only as his knee at the time before we walked into the museum.”

Bryant has been a researcher for around 35 years, and started out doing corporate research.

“I love to research, and I’ve always loved the arts and history,” Bryant said. “And so, at a certain point, I began to ask myself would I feel I’m making a contribution, if I took my skills and business analysis and research, to work for a nonprofit organization.”

Prior to working at the NMAAHC, he was curator of collections and exhibitions at Morgan State University’s James E. Lewis Museum of Art in Baltimore. Bryant talked on Friday, July 17, on the CHQ Assembly Video Platform, with Vice President and Emily and Richard Smucker Chair for Education Matt Ewalt. The conversation, titled “Preserving History In Real Time,” was the last of Week Three’s theme of “Art and Democracy.” Bryant focused on the importance of bridging the gap between high culture and popular culture to make museums more inviting to everyone, as well as showing the humanity behind objects.

History happens everyday, and Bryant said rapid-response collecting is a way to keep track of current events in the United States, and preserving information and visuals for future generations. Bryant said these artifacts can be “anything that helps us to preserve the memory of the moment. It’s really about the object representing an experience, a human experience.”

He said with the recent protests against racial injustice, museums are collecting signs, banners, T-shirts and even face masks with messages written on them. Bryant prefers to have a direct donation in order to know and capture the story behind the item.

“You see someone with a particular sign and you just go up to them and you talk to them about the sign,” Bryant said. “And you ask them, ‘Why are (you) here?’ ‘Why is this important to you?’ You start having a conversation and then that helps to give a better context to the object itself, and creates a way to connect the objects in some sort of human experience.”

Artifacts from large events, like presidential inaugurations, were always collected for exhibits, but after 9/11, Bryant said rapid-response collecting started when American museums started to think how they could respond to a larger range of historic events.

Ewalt asked why photographs were not sufficient, and why museums needed physical objects.

Bryant said that with large murals, people do not get the sense of scale with pictures. With three-dimensional objects, people need to be able to walk around it, Bryant said, to “get a sense of its magnitude and its presence within the physical space.”

But photography is important as well; Bryant said that images serve as evidence that an event happened.

“They can also be very creative in terms of artistic expression and emotion, giving some sort of emotion,” Bryant said. “They can have emotion tied to them, so they’re important in that way.”

He said transformative periods in history, such as the Civil Rights Movement, are part of everyday life of those living them.

“The Civil Rights Movement didn’t just come out of nowhere and actually was part of an evolution,” Bryant said. “I think about history as really representing an arc in the human progress. Every point along that arc is really connected in some way.”

“When we think about civil rights photography, if you’re familiar with the names, those names will generally be men,” Bryant said.

He said these men were often taking photos for newspapers, magazines and other publications. Women photographers whose work were part of the Civil Rights Movement are not represented in the “canon” of the movement.

“I would also say, ironically, (there is an) absence of African Americans in many ways,” Bryant said. “We know of African-American photographers can be seen at the time, but it seems that the canon of civil rights photography was really defined by white men.”

Ewalt then asked how videos from cell phones and social media can be presented in a museum alongside physical objects.

“I think many museums across the board are still trying to figure out how … we grapple with cellphone images as objects,” Bryant said, “and then in terms of how it might fit in with the object itself in many different ways when you collect these materials.”

Video is particularly important with how it relates to the history of protests, like in the early ‘90s with Los Angeles police’s beating of Rodney King and the later LA uprisings.

Going off of Week Three’s theme of “Art and Democracy,” Ewalt asked why museums are essential to democracy.

Bryant said that museums are places where people feel welcome and open to engage in a civic dialogue, but this has not always been the case.

“There has been a barrier between mass and popular culture and everyday lives versus high culture — celebrating the Princeton galleries, for example. ‘Welcome to this museum that is really a tribute to my collection of the things that I’ve collected as I traveled all over the world,’” Bryant said.

Ewalt’s last question was how museums traditionally presented an object as opposed to the newer way of showing the humanity behind the object.

Traditionally, Bryant said, objects were presented with information that was specific to the object itself, like who made it, what it is made of and its function. The newer way is presenting the story behind the object, such as how the “Red Violin” is presented, which Bryant recommends to everyone.

“You learned that when it was first made that the violin maker made it for his wife, who was going to give it as a gift to their unborn child, (and that) both his wife and his child died in childbirth,” Bryant said. “He decided that he was going to get rid of the violin, because it held on to so many memories, and then it goes to the next person.”

Each owner of the violin had a different story to tell and, Bryant said, the instrument held a deep significance in each of their lives. An actor in his late 60s told Bryant something similar, that with each character he played, he learned more about humanity. If he acted well, he was able to share that knowledge with the audience and maybe become a better person himself.

“That’s my curatorial practice, that’s my approach,” Bryant said. “How do I become a better person? How do I learn about humanity and how do I help people connect to their own?”