Anna Deavere Smith believes in not casting people aside, especially when it comes to students in the nation’s public schools.

“A lot of things that a (Black, brown or Native American) kid might do in school that a white kid would do, too, would be called mischief,” said Smith, a nationally renowned playwright and actress, in a February 2018 interview on “Real Time with Bill Maher.” “Poor kids get pathologized and sent to jail. It really starts with expulsions and suspensions. That cycle of mass incarceration destroys communities and families and everything else.”

Notes from the Field, a 2015 one-woman play written and performed by Smith, is based on issues surrounding race, class and America’s school-to-prison pipeline, and uses more than 200 interviews Smith conducted with students and teachers caught up in the pipeline as its framework.

“My plays usually start with outrage and then they go to a sort of mourning, and then they usually end up with love or forgiveness,” she told Maher. “I play Congressman John Lewis; he ends the play. After this whole play of seeing violent acts … I try to bring it all home with acts of courage.”

One such courageous act that Smith highlighted was that of Bree Newsome Bass, a Black activist who was arrested after climbing a flagpole to remove a Confederate flag in 2015.

“I think to tell the stories of this country you have to tell it through the voices of many people, not just one race and not just one gender,” she said on “Real Time.”

Smith will continue exploring elements of her own artistic expression, as well as addressing the issues of the current moment, in her lecture titled “Community, Character, Diversity” at 10:45 a.m. EDT on Monday, July 13, on the CHQ Assembly Video Platform. Her presentation opens a week centered on the theme of “Art and Democracy.”

“In her singular art form, Anna Deavere Smith demonstrates the power of art and artmaking as a catalyst for change,” said Vice President and Emily and Richard Smucker Chair for Education Matt Ewalt. “Professor Smith will open our week reflecting on the theme of art and democracy through her unique blend of lecture and theater, exploring issues of racism and social inequality in ways only possible through her art.”

Though a live performance on the Amphitheater stage is not possible, as it was for Smith in the past, her lecture will take place virtually.

“We’ve provided Professor Smith with the theme and a ‘studio in a box,’ as she’ll film her presentation at her home in Los Angeles and then join us live for a moderated Q&A,” he said.

This program is made possible by the Boyle Family Lectureship Fund & the Lewis Miller Memorial Fund. 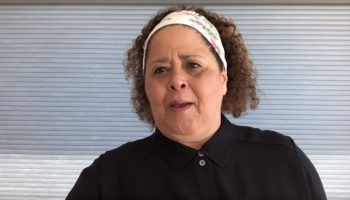