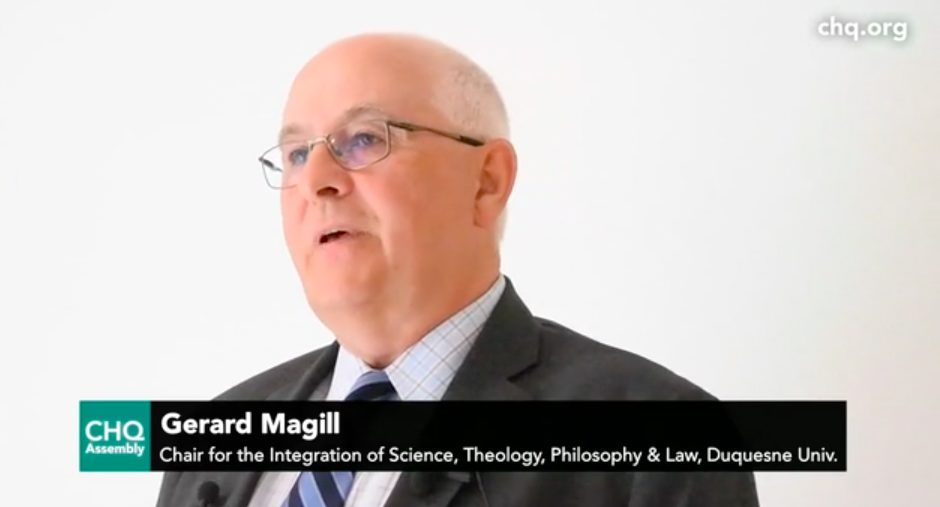 The fall of Adam and Eve by “playing God” could mirror how human civilization eventually falls, Dr. Gerard Magill said in his lecture at 2 p.m. EDT Monday, July 20.

Magill connected the Biblical story of the fall of Adam and Eve from the Garden of Eden to the possible ends of the world in his lecture “Technology, Ethics, & Imagination” on the CHQ Assembly Video Platform. His presentation was the first in the Week Four theme for the Interfaith Lecture Series, “Ethics in a Technologically Transforming World?”

Magill contributes his expertise in multiple roles in ethics at Duquesne University in Pittsburgh. Since 2007, Magill has held the Vernon F. Gallagher Chair for the Integration of Science, Theology, Philosophy, and Law at the university, where he is a tenured Professor in the Center for Healthcare Ethics. Magill is also a board member for Duquesne’s Carl G. Grefenstette Center for Ethics in Science, Technology, and Law. His name is credited in 10 books on medical ethics, often with an added layer of religious morality, as an author, co-author and editor.

Perceiving any future outcome requires imagination, Magill said in his lecture, because the “image” only exists in theory until it takes place in reality. He used the situation of considering someone for marriage as an example.

“We get this image: ‘I can spend my life with this person. This is mesmerizing me. And I get the data and the rationality and the reasonableness (to support this),’” Magill said. “So you come to the conclusion, ‘Yes, we should marry. I’m sure about this.’”

Magill said a person imagines a future with someone just as people imagine God. But when thinking about God, people can set logic and reasoning traps for themselves when it comes to technology.

“What we assume to be normal is the result of major breakthroughs that past civilizations would have been mesmerized by,” Magill said.

The existence of technology that borders on playing God, Magill said, does not always mean it should be used. But people can also use new technology to protect life, God’s creation.

“Save the life that can be saved,” Magill said multiple times throughout his lecture.

He used “maternal and fetal” conflicts as an example of a difficult ethical situation. In a hypothetical situation where a doctor discovers that a womb is cancerous and would kill the mother before the baby could be born, there is a difference between foresight and intent.

“(The mother and the doctor) foresee with assuredness that the baby will die, but it cannot survive out of the womb,” Magill said. “But that knowledge has got nothing to do with intent. Because the mum knows in advance that the baby will die does not mean the mum wants the death. It’s a very important ethical distinction.”

Magill used another example of a woman who was against abortion, but had pulmonary hypertension — a condition that is common in women and can be fatal. Faced with life-threatening complications, she agreed for the doctor to evacuate her womb at 11 weeks.

“They could have tried to save both, but it’s almost certain that both would have died,” Magill said.

The debates surrounding frozen embryos, early adoption, in-vitro fertilization, and surrogate motherhood provide another ethical challenge. Frozen embryos become a situation of rescue ethics because they carry potential for creating kids that can be adopted by a third party.

Magill then switched gears to describe the conundrums in end-of-life situations created by technology. He began with the case of Terri Schiavo, who fell into a permanent vegetative state after cardiac arrest. For 15 years, her parents and her husband Michael fought in court over her parents’ wishes to keep her alive indefinitely with a feeding tube, while her husband said that she would not have wished to stay alive in that way. Eventually the court ruled to allow her to be removed from life support.

Magill said there are thousands of patients like Schiavo who can be kept alive for years. He cited the Christian prayer for a peaceful death, to die quietly in one’s sleep, which stands in conflict with modern technology’s ability to extend life past this point. But technology can also allow the outcome of a peaceful death through managing disease until the end.

“It’s simply about removing technology at the correct point to let the body slip away peacefully, without suffering, without pain and with the dignity of the family being there,” Magill said.

Magill then switched back to technology that can control the beginning of life: human genomics.

About 20 years ago, hundreds of millions of dollars funded the sequencing of the first human genome. To go to a facility and sequence your own human genome today takes five hours and $1,000. Magill said it will take less and less over time to do this, and could eventually only cost $100.

Currently, hospitals track 27 traits in newborn babies to ensure proper healthcare, though it’s possible to map a baby’s entire genome sequence. Magill said that Americans are more resistant to this, while Europeans are already doing this because of what he called a “solidarity mindset.” By collecting the full genomes of a mass population, doctors can detect early-onset conditions and disease likelihood, while also locating treatment solutions within the same genome.

Making health decisions for minors, who are not legally allowed to make their own decisions until they become 18, can also become thorny. Magill used the example of a young teen who wanted to stop her cancer treatments but lost her case in court with her parents. When she turned 18, she decided to continue the treatments after all.

But the case of the Nash family brings up the ethics of making decisions on behalf of an embryo. Their child, Molly, was projected to die early from Fanconi anemia. To save her, they chose to implant via IVF an embryo without Fanconi anemia traits specifically to birth a second child, Adam. The umbilical cord and blood from the pregnancy was donated to Molly, and Adam would later donate stem cells to Molly.

Magill said this could easily become a difficult situation. The younger sibling had to donate blood over time and later donate spinal fluid, which is painful.

“What if he said, ‘I can’t do this for my sister anymore’?” Magill said.

Magill continued with CRISPR, a gene editing tool that works like computer shortcuts to edit genes. First it finds all parts of the DNA in every cell of the body that it’s looking for, then replaces it with a desired trait. A doctor in China, against the wishes of his own country, the United States and the United Kingdom, used CRISPR to edit the genes of two young girls to protect them from HIV. The doctor altered other genes in the process and is now in jail for “playing God.”

But the newest platform for ethical discourse, Magill said, is data science. Artificial intelligence uses algorithms to collect huge amounts of data for targeted marketing and other purposes. And AI is already transitioning into machine learning, where computers are able to speak, train and guide each other without humans. Eventually, they will be able to work thousands of times faster than a computer chip.

The use of 5G technology allows for machines to collect data at record speeds and reach conclusions faster. China is moving the fastest in implementing 5G, and its citizens already use devices — instead of currency — to pay for goods and services. China reaps massive amounts of data this way.

Pharmaceutical companies are using data science and genomic science to develop a vaccine for COVID-19. Through genomic science, scientists were able to find a possible trait for a vaccine quickly, while computational models — not doctors — quickly deduced possible solutions.

But the collection of health data, which is normally protected by healthcare organizations, reaches Google, Facebook, Apple and other companies through their partnerships with those healthcare organizations. While these huge corporations are working for free to help these organizations with algorithms, their minimum requirement is access to 100% of the data ,with nothing anonymized. Magill said these companies in turn use it for themselves.

“If (machines) begin to do things for us — supposedly ‘for our welfare’ — we are now talking about in the not-so-distant future the concept of transhumanism, human enhancement,” Magill said.

However, he did say this would likely not happen in this generation.

“We are in the portal from the old world, where it was kind of straightforward medicine — ‘I went to see the doctor, got the stethoscope, got the injection, got the surgery’ — through this portal to machine learning that is going to be able to do things and suggest things and be able to treat the somatic and the general level, thereby changing the species and moving it forward,” Magill said.

After 500 million years of history leading up to this technology, Magill said it is now possible to end the human species within 100 years of gene editing going too far.

But Magill shifted the topic again to the matter of the eventual vaccine for COVID-19, which he said was not as vicious as other viruses but still a threat.

He said the rise in pandemics is directly linked with pollution, which actually allows viruses and other problems to arise. As early as 2050, rising sea levels will force thousands to move out of Eurasia, which will be an even larger number coming into Europe than its most recent struggle to support Syrian refugees fleeing war.

“It’s not just genomics that can kill us, it’s not just algorithms that can threaten us,” Magill said. “It’s also just the air we breathe, the planet we live in. We can pollute it to the point of destroying it.”

“If we killed ourselves in these ways, the planet would recover,” Magill said. “… It’s just that it would survive without humanity. And maybe that’s the story of the fall. Not of the past, but of the future.”