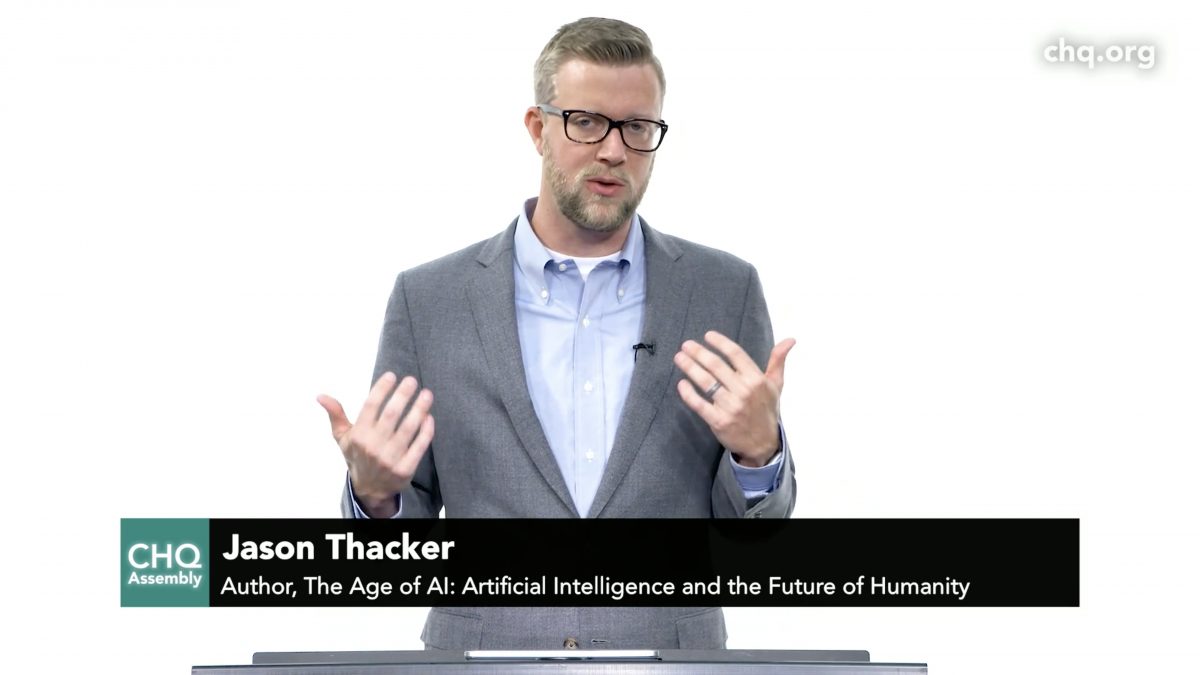 Whether people regard artificial intelligence as a tool that can turn into either a future friend or a threat, Jason Thacker said the technology is already here.

Thacker delivered his lecture “The Age of AI: Artificial Intelligence and the Future of Humanity” at 2 p.m. EDT on Tuesday, July 21, on the CHQ Assembly Video Platform. The name of Thacker’s lecture matches his book and was part of the Week Four Interfaith Lecture Series theme, “Ethics in a Technologically Transforming World?”

Maureen Rovegno, Chautauqua’s director of religion, led the subsequent Q-and-A while the audience submitted questions through the www.questions.chq.org portal and through Twitter with #CHQ2020.

“Your faith-based ethics give you that joyful kind of optimism that counteracts the pessimism that many people have started to feel — that technology is taking over areas and directions that have shadow sides to them,” Rovegno said.

Thacker is Chair of Research in Technology Ethics at The Ethics and Religious Liberty Commission of the Southern Baptist Convention. He said his work with the ERLC revolves around the message in the Book of Matthew, specifically Matthew 22.

“The ethical system in Matthew 22 is more robust than any challenges we will face and any innovations that will come,” Thacker said.

He holds a Master of Divinity from The Southern Baptist Theological Seminary and is now pursuing a Ph.D. in Ethics and Public Theology at the seminary. In the meantime, he writes articles on technology ethics for the ERLC site and has also written for Christianity Today, The Gospel Coalition and other online sites. His work with the ERLC’s document, “Artificial Intelligence: An Evangelical Statement of Principles,” was featured on Slate.

Thacker said that new technology is not actually bringing up new questions.

“Questions that are posed by today’s technologies like artificial intelligence actually aren’t new at all,” Thacker said. “This is because AI doesn’t really cause us to ask new questions of humanity, per se, but to ask age-old questions of new opportunities. It’s the same old vices and sins and proclivities we’ve always dealt with in humanity, but with new opportunities before us.”

Thacker said that artificial intelligence poses two questions. What does it mean to be human? And what is the role of technology in our lives?

What being human means, for Thacker, is based on the fact that in Christianity, God created humans in his likeness and image. Others, however, have claimed that religions are no longer necessary to guide ethics because of science’s progress.

“Many secular folks will caricature faith as believing in something without fact or knowledge, but fail to see that science itself has some faith to it,” Thacker said. “Because we’re not only able to explain what is seen, we have to identify the design behind it.”

Thacker cited Professor John Lennox of Oxford, who said that past philosophers and scientists — including Galileo and Isaac Newton — believed that God created the laws of nature, which drove their scientific inquiries and major breakthroughs.

As an ethicist, Thacker thinks about his work in a similar way.

“I simply cannot buy into this role of autonomous thinking untethered from any natural law framework of the world with a creator god at the center,” Thacker said. “I simply find it unsustainable and unconvincing ethically, as well as unsustainable with the pursuit of truth and the way this world works and what it means to be human.”

Thacker looks to the Book of Genesis to answer the old questions. In the story of creation, God created everything and made humans separate from the rest of the world, including animals, in his image to take dominion over all things and be stewards of the world. Thacker believes technology allows for humans to fulfill this role.

“This creativity and these abilities to make things to aid us in our role as image-bearers is the core of what technology is,” Thacker said. “ … But these tools and technologies are made by fallible and sinful human hands, and they are quick to show the brokenness of this world.”

Thacker said that tools can be used to lord power over others and dehumanize them, and therefore dishonor God. It reflects Cain’s sin in the Bible, when he used his strength, given by God in order to work, to kill his brother Abel instead.

Along with the promise of what technology can do, it can also open up new ways to hurt others.

“It expands what is possible for us to do, and ultimately we are the ones who are responsible for it, not the tools themselves,” Thacker said.

Pulling morality from the Bible allows for Christians to be unfettered by changing social mores over time, Thacker said. Christians instead seek to love God and their neighbor as fellow image-bearers.

“There are so many God-honoring benefits in these technologies,” Thacker said.

Thacker said technology, including technology used in warfare, has uses in protecting people as fellow image-bearers, regardless of differences.

“And so that’s why I’ll stand up for Uighur Muslims in China, just like I’ll stand up for the person next door or the elderly lady down the street or the baby in the womb,” Thacker said. “It’s because of this concept of human dignity in the image of God.”

As a Christian, Thacker is not afraid of any negative outcome from humans’ misuse of technology because of the message in the Book of Revelations, the final book in the New Testament that describes Jesus returning to Earth to save believers once again.

“I don’t fear killer robots, or massive job loss, or catastrophic downturn, because I know that my God is reigning and ruling and holding the entire universe together in his hand,” Thacker said. “There is nothing that will catch my God off-guard, and nothing that will stop his plans for this world.”