“A lifetime of service to others is a life well spent for some people,” said the Rev. Traci deVon Blackmon in her homily on Wednesday, July 8. “The power of faithfulness on every level of life has its own reward.”

Blackmon preached at the 9:15 a.m EDT morning devotional on the CHQ Assembly Video Platform. Her sermon title was “Faithful Without Fanfare.” The scripture text was Acts 1:23-26 (NRSV).

“So they proposed two, Joseph called Barsabbas, who was also known as Justus, and Matthias. Then they prayed and said, ‘Lord, you know everyone’s heart. Show us which one of these two you have chosen to take the place in this ministry and apostleship from which Judas turned aside to go to his own place.’ And they cast lots for them, and the lot fell on Matthias; and he was added to the eleven apostles.”

At Christ the King United Church of Christ, where Blackmon is the pastor, they celebrate Black History Month by reflecting on the contributions of Black Americans “to the rich tapestry of our American life,” she said. “There are many untold stories about people who broke the color barrier, or made their communities better.”

In 2012, President Barack Obama invited six senior citizens — unsung heroes, Blackmon said — to the White House, where they were honored for their extraordinary acts of service. They were pioneers in education who made changes for their communities and worked for racial equality.

These six people included Theodore Peters, one of the first Black men to join the Marine Corps and who then served his Southside Chicago neighborhood; Gladys Reed, who fed hungry people in Cleveland and volunteered in a hospital taking care of patients 20 years younger than herself; Velma Lois Jones, the first Black classroom teacher to head the Tennessee Education Association and a worker for voting rights.

Also included were Columbus Preston Holmes, who fought in World War II and served as postmaster and other posts in Mound Bayou, Louisiana. Marguerite Levere was a missionary and in 2012, at the age of 107, she was still taking care of her daughter, aged 78, who had cerebral palsy. James Patrick flew with the Tuskegee Airmen in World War II and worked as a bail bondsman in Atlanta, providing bail for Martin Luther King, Jr.

“The only thread among them is resilience and perseverance,” Blackmon told the congregation. “We have extraordinary stories and people in our own families.

She asked the congregation if they were familiar with Matthias. He was chosen to replace Judas, who died by suicide after selling out Jesus.

“Peter said that Judas must be replaced,” Blackmon said. “Now, I have to ask why he did not look at the sisters. Mary Magdalene would have been my choice.”

She asked what qualifications this small Christian community of 120, gathered in an upper room, were looking for.

“They wanted someone who had been with them from the beginning, who knew their stories and mission. They wanted someone they respected, and in the whole group, they only found two — Joseph and Matthias,” she said. The lot fell to Matthias.

This passage in Acts is the only place in Scripture where Matthias is mentioned.

“Author Marvin McMickle said that there are not many churches, hospitals or buildings named (for) St. Matthias. I did not find one until I visited Budapest,” Blackmon said. “But he was faithful enough to be one of the select.”

Blackmon asked the congregation, “Are we faithful enough that even if we are not chosen for the limelight, we will do the work?”

She said, “We live in a world where everything is about media and exposure. There is a clamor for us to pay attention to things that we should not give attention. Service to Christ is not about popularity or the books you write. All God is concerned about is the measure of your faithfulness.”

How do you measure that faithfulness? “You show up when no one is calling your name,” Blackmon said. “That is what Christ calls faithfulness without fanfare.”

The Rev. Carmen L. Perry, pastor of the Hurlbut Memorial Community United Methodist Church in Chautauqua Institution, presided from the Hall of Christ. Joshua Stafford, interim organist for Chautauqua Institution, played the Tallman Tracker Organ. Michael Miller, a Chautauqua Opera Apprentice Artist, served as vocal soloist. The organ prelude, performed by Stafford, was an improvisation. Miller sang the hymn, “Blessed Quietness.” The anthem was “Adoration,” by Florence Price. Stafford played an improvisation for the postlude. This program was made possible by the Mr. and Mrs. William Uhler Follansbee Memorial Chaplaincy and the Robert D. Campbell Memorial Chaplaincy Fund. 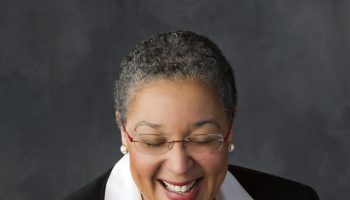