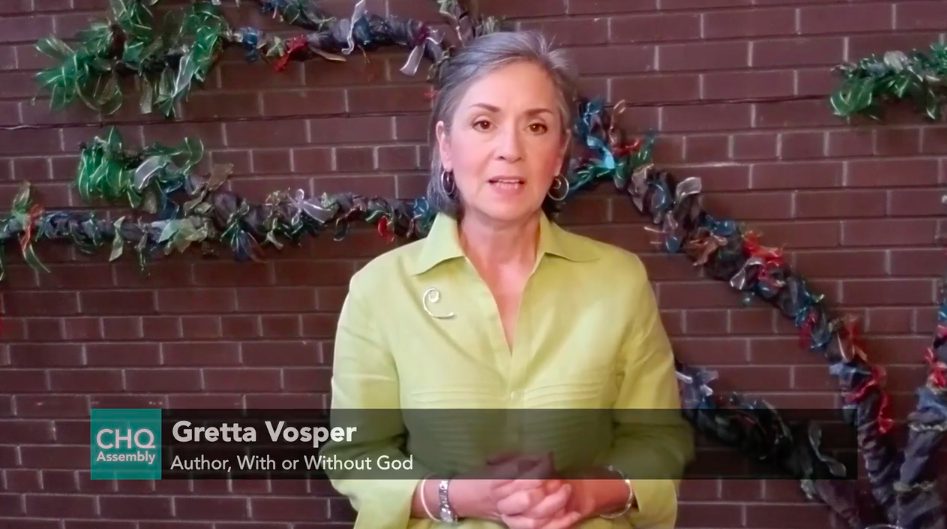 Despite the name of Gretta Vosper’s lecture, “Falling in Love with Being Together, Because We Can’t Afford to Fall Apart,” she and the audience were not physically together.

“There is one sadness I have today: that we cannot actually be together,” said Vosper, an atheist and ordained minister in the United Church of Canada. “We don’t get the chance to fall in love with being together as I know we would have done, had we been sheltered under that soaring roof of the Hall of Philosophy, surrounded by the mosaics of years gone by.”

Instead, she connected to her audience through the CHQ Assembly Video Platform, where Vosper said the highest value that religious networks can offer is to supplement the lives of individuals — not just within a congregation, but an entire community — in her lecture broadcast at 2 p.m. EDT on Thursday, July 9.

The lecture was part of Week Two’s theme for the Interfaith Lecture Series, “Forces that Shape Our Daily Lives: The Contemporary Search for Spirituality.”

Vosper is a minister who first described herself as a “non-theist” in 2001 while delivering a sermon at West Hill United Church. When she realized some of her peers also called themselves non-theists but still believed in a theistic supreme being, she began to question the label she had given herself.

In 2013, she felt it was the perfect time to announce herself as an atheist, in solidarity with atheist bloggers facing violence in Bangladesh. The Toronto Conference chapter of the United Church of Canada investigated her due to public controversy, but ultimately approved her continued ministry.

She spoke to her Chautauqua audience from her vantage point as a minister who — prompted by her congregation at West Hill Church — has replaced the Lord’s Prayer with a similar set of words without mentioning a personified God, and the church welcomes anyone, including Buddhists and atheists. Vosper said those who no longer consider themselves to be religious often still crave the benefits of religion and spirituality. Most of all, they need a contact point for human connection.

Vosper said that stress, like any external force, could act as both a positive and negative force on a person’s life, and that many people turn to spiritual practices that have been distanced from their original religious source to soothe the burden of outside forces that shape daily life. Vosper herself starts and ends her day with martial arts movements intended for meditation and lists what she is grateful for.

“(Spiritual practices) help us cope with the challenges that seem to mount around us at every instance,” she said.

Vosper based her point on a 2017 Public Religion Research Institute (PRRI) study.

“Spiritual people — regardless of whether they are religious or not — report higher levels of satisfaction with their relationships, communities, and life in general than do nonspiritual people,” the study said.

Through revisions of its statement of faith every five years, the West Hill United Church has gradually broken down “barriers (to) inclusivity we didn’t know we had,” Vosper said. The church has put in writing that it does not accept the Bible as the final word of God and “the way we lived was a greater testament of faith” than religious text.

As a result of these changes, people with diverse beliefs have joined the West Hill Church, including — but not limited to — atheists and Buddhists.

But she disagrees with Rue on religion being outdated.

“I think we have a noble truth that can pull all of us together,” Vosper said.

Tags : Because We Can’t Afford to Fall ApartFalling in Love with Being TogetherForces that Shape Our Daily Lives: The Contemporary Search for SpiritualityGretta Vosperinterfaith lectureinterfaith lecture recapreligionweek two
previous article