It was a casual affair.

Dressed in a black Miller High Life tee paired with a blazer and flat cap, Ben Folds sat at his keyboard. Beside him, a table, cluttered with headphones, water and various pens and pieces of paper. Among them, a blue one, where he sketched out a rundown of his program, which was left entirely up to him.

In an attempt to soundproof the room, a mattress stood against the back wall. With a few notes of introduction, Folds began sharing his music with the world via Skype — all the way from Sydney, Australia, where it was 7 a.m.

Folds’ 2015 album So There consists of eight chamber pop songs in collaboration with yMusic Ensemble and a piano concerto performed with the Nashville Symphony. It’s also his most recent, so he started there with “Capable of Anything,” a pocket symphony of sorts.

Amid piano riffs and chords, Folds sang “We are capable of anything / But you don’t seem to think / That you are / Capable of anything.” As he hit the last note of the song, Folds thanked and bowed to his metaphorical audience.

“I made them all up — that’s why I play them,” Folds said as he began the next piece, “Jesusland.”

“Jesusland,” a piece including analytical commentary on America, is from his 2005 Songs for Silverman album. Folds sings about the use of Jesus’ name to push consumerism, lamenting through lyrics such as “Town to town / broadcast to each house / they drop your name but no one knows your face / Billboards quoting things you’d never say / You hang your head and pray for Jesusland.” Folds’ voice, under rolling piano phrases, grew fainter and fainter with each repeated chorus.

While in quarantine in Australia, Folds’ newfound free time has been spent working on a new album, and the release of his first single in two years, “2020.” Folds said he wrote the ballad using the year’s events, pairing an upbeat tone with somber lyrics. Folds let his keyboard rise and swell with gentle pentatonic chords.

“It is really difficult to write in an era where the news cycle is so fast,” Folds said. “I thought, ‘Waltzes are timeless’ and it should be about this year, but it has to be specific to the middle of the year because the song will be old news in a few days.”

The next four songs stretched across the past two decades, weaving in and out of his era in his band, Ben Folds Five. First was “Zak and Sara,” a pop song on his 2001 album Rockin’ the Suburbs, his first solo album after leaving the band. The song’s intricate piano riffs shook his plastic keyboard, mirroring the ethos of the J.D. Salinger short story collection, Franny and Zooey, from which he drew inspiration. Folds’ right hand played bluesy rhythms, while his left anchored the piece with root chords. It was followed by “Don’t Change your Plans,” released in 1999 on his rock album, The Unauthorized Biography of Reinhold Messner. “Landed,” the title track of the 2005 Landed album, came next, bringing the energy down, as Folds said the lyrics were written about a friend who went through a bad relationship. The song accentuated beats two and four in each measure, saturating it with a groovy sense of rhythm reminiscent of jazz. The next song was the most recent, 2013’s “One Angry Dwarf and 200 Solemn Faces.” The song was so raucous, Moore and Folds joked that if Folds’ neighbors were not awake before, they were by the time he finished.

Folds, who has composed original music live with the National Symphony Orchestra, is renowned for his musical improvisation skills, which Moore put to the test with an audience member’s request on Twitter. The request was for an impromptu cover of a popular artist’s song. The example was Post Malone, who Folds admitted he doesn’t listen to, but made up a tune on the spot to honor the pop artist anyway.

“Post Malone / I don’t know / Never heard your goddamn music / I’m sure it’s good / It makes a lot of people happy / Post Malone / here is a song from some old fucker back in Australia,” he said. Using vibrato and deliberatemusical phrasing and placement, Folds carved a Beatles-like tune seemingly out of thin air.

The music had an intermission with the mention of his memoir A Dream About Lightning Bugs, which was published in 2019. According to Moore, the first 10 pages introduce his philosophy about “light and about a moment,” which she said would be “great to hear right now.” Folds proceeded to read the closing paragraph aloud.

The last song on the program was “The Luckiest,” a love song originally written for a kissing scene in the 2000 movie “Loser,” directed by Amy Heckerling. Folds struggled to recall the opening chords, which flowed well with the starting lyrics, “I don’t get many things right the first time.” Ratcheting up the drama in this last piece, Folds’ eyes squeezed shut and let his hands roam free across the black and white keys — every muscle in his body appeared to tense with the concentration of a consummate musician. 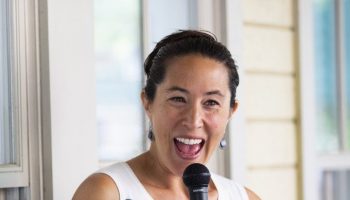 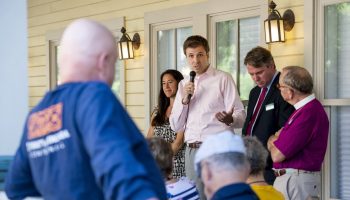 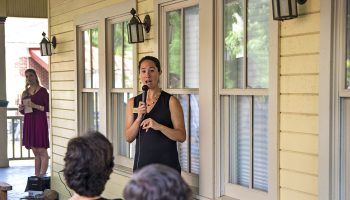