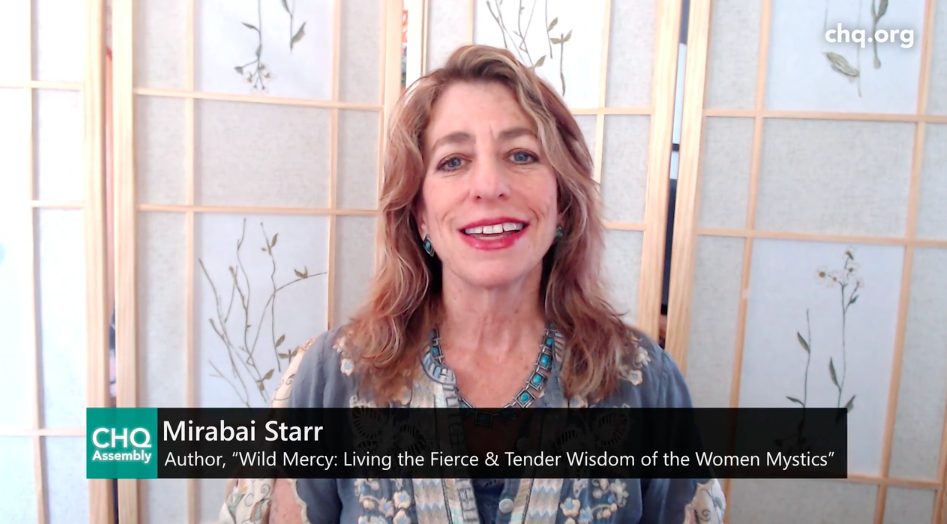 Feminine spirituality, Mirabai Starr said, is a paradox in a world that prioritizes masculine energy and attitudes.

“The feminine inhabits this paradoxical space between form and formlessness, between interconnection and very specific embodied experience,” Starr said. “The masculine spirituality has emphasized this world, this body. Many of our spiritual practices, that most of us take for granted, are actually predicated on this belief in the illusory (feminine) quality of human experience.”

Starr is an international speaker and teacher on contemporary interspiritual dialogue and practice. Her spiritual journey began when she moved to the Lama Foundation at 14 years old and was influenced there by the late interspiritual scholar and teacher Ram Dass and other teachers from faith practices including Hinduism, Buddhism and Sufism.

Chautauqua’s Director of Religion Maureen Rovegno led the subsequent Q-and-A with Starr, who called in from her publisher’s recording studio in Boulder, Colorado, where she is recording an audiobook version of Wild Mercy. Audience members submitted questions through the www.questions.chq.org portal and on Twitter with #CHQ2020. During the Q-and-A, Starr clarified that feminine spirit is not only found in the traditional definition of a woman.

Starr said the feminine spirituality in all faith practices deals in relationships, emotions, ambiguity and a wild creativity that threatens masculine values of human life.

“We have, for way too long, taken … the prototype for humanity, for humanness, as white maleness,” Starr said. “The white male is the picture, the prototype, for what it is to be human. It’s time to subvert that paradigm, to dismantle it, to allow it to come undone.”

Starr used meditation as an example. Masculine meditation styles “often beat us into submission” while feminine meditation could best be described through the Hindu tradition of Hridaya, or the heart cave, where a meditator looks inward into a sanctuary space where they are able to challenge and let go of false thoughts holding them back.

“Meditation practice becomes a refuge, a sanctuary, a space of refreshment and renewal, and also an intimate coming to know the nature of our own minds so that we don’t take ourselves so seriously when it really counts,” Starr said.

Starr said in Judaism, the faith she grew up in as a child, the Shabbat on Fridays is part of an extended space of celebration that allows for a return to a spiritual space that is inherently feminine.

She said Shabbat allows people “to disentangle from the tyranny of tasks that bosses us around most of the week and allows ourselves to take some time to just be, rather than do.”

Shabbat is a return to the Shekhinah, or an in-dwelling that Starr said is a feminine spirit, which is an internal source that mirrors the unknowable divine presence found everywhere. By joining with the community, people can be realigned with God. She said this was similar to a Taoism teaching which calls for rest, so a person can develop enough patience for dust to settle and to act from a space of deep listening.

This feminine energy does not equate to submissiveness, Starr said, but a powerful silence.

“It is a space that is deeply alive and listens, tuned to the realities of what is,” Starr said.

In Taoism, Tao is something that cannot be fully defined, though some of its aspects outlined in Tao Te Ching teachings can be considered as an eternal mother. It is a classic feminine paradox of both knowing and not knowing.

Starr said Judaism’s command to keep Shabbat holy is similar to Buddhism’s refuge vow, where Buddhists are invited to take refuge in learning about the life of Buddha, Dharma (Buddha’s teachings) and the Sangha, which are teachings from the community of Buddhist practitioners.

God transcends distinctions in many faiths, including Islam, though its texts and prayers primarily use masculine language to describe God. However, Starr said, the names Rahman — mercy — and Rahim — compassion — are both names of God found in all five daily prayers and the Quran.

The root found in both words, rah, means womb.

Starr has always felt drawn to many different faith traditions, but she said now she takes greater care in acknowledging their cultural origins.

“I have always felt drawn to many different faith traditions, but I do so now without the entitlement that I used to carry as a white person in this world, that I could just help myself to the cultural treasures of any tradition that I pleased,” Starr said.

Starr’s award-winning work in creative nonfiction and translations of sacred literature of mystics includes her translations of “The Dark Night of the Soul,” a poem by Saint John of the Cross, and The Interior Castle by Saint Theresa of Ávila. She first came across the two writers when studying Spanish Christian mystic literature in college.

“The Dark Night of the Soul” describes times in life when everything dries up and there is no access to a felt sacred presence, when constructs of the self and its belief systems are deconstructed. With only masculine spirituality, Starr said these moments can feel dark and cold without a feminine spiritual presence.

“‘The Dark Night of the Soul’ is about the liberation (we experience) when we’re able to let go of our sensory and conceptual attachments, to the way we think spiritual life is supposed to be, and have a naked encounter with what is, with love itself,” Starr said.

Saint Theresa of Ávila’s The Interior Castle describes the soul as she saw it from a vision — as an interior crystal, a castle with many sacred spaces inside. Theresa detailed a three-part journey of Christian mystical experience: purification, illumination and union. Purification under masculine scrutiny is defined as the task of fixing oneself to be worthy of God’s love, while the feminine acknowledges the catastrophes that naturally occur in life and calls people to show up fully in those moments.

“Grief empties us,” Starr said, and allows room for a person to be an instrument for peace.

All faith traditions have a feminine spirit, so they need women as teachers to light the way, Starr said. Starr said that people, regardless of what faith or faiths they call home, should seek guidance from women teachers they know and also seek out those they may not — including those who are young, old and especially women of color, who Starr said have been radically silenced in traditions around the world.

“If you can’t find them, create them,” Starr said.