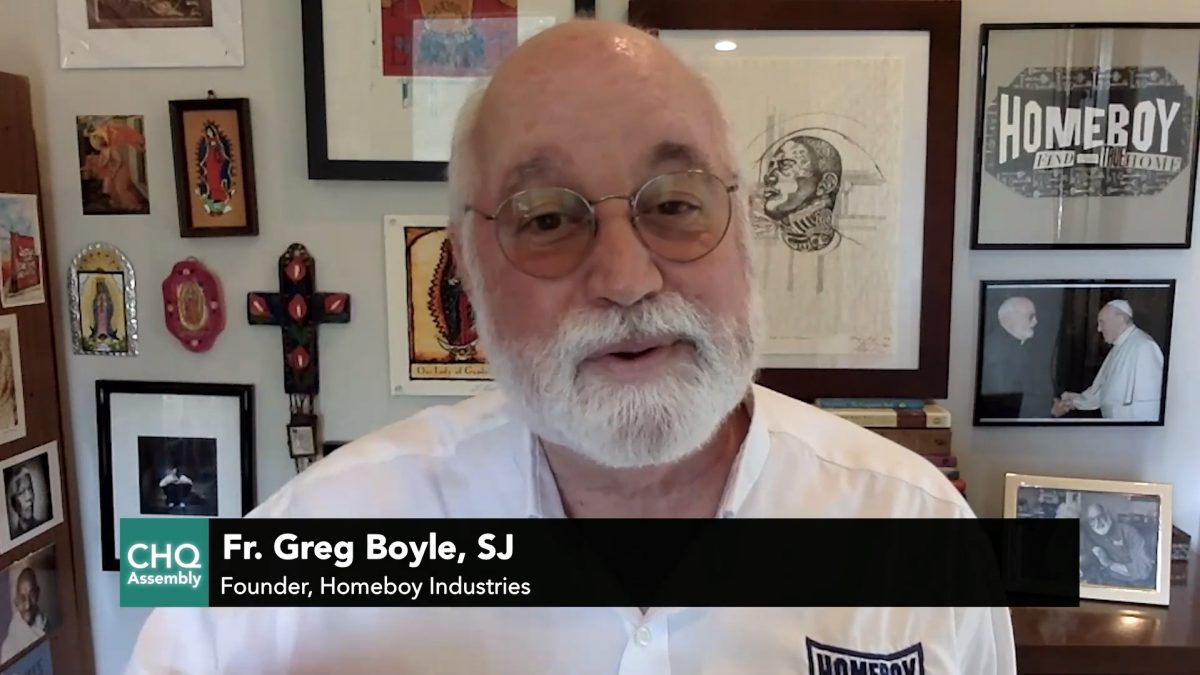 “Scarcity, like separation, like us versus them, is an illusion. We need to build a longer table, not a wall,” said Fr. Gregory Boyle, SJ, at the 10:45 a.m. EDT Sunday, July 12, service of worship and sermon on the CHQ Assembly Video Platform.

“After this Jesus went to the other side of the Sea of Galilee, also called the Sea of Tiberias. A large crowd kept following him, because they saw the signs that he was doing for the sick. Jesus went up the mountain and sat down there with his disciples. Now th

e Passover, the festival of the Jews, was near. When he looked up and saw a large crowd coming toward him, Jesus said to Philip, ‘Where are we to buy bread for these people to eat?’ He said this to test him, for he himself knew what he was going to do. Philip answered him, ‘Six months’ wages would not buy enough bread for each of them to get a little.’ One of his disciples, Andrew, Simon Peter’s brother, said to him, ‘There is a boy here who has five barley loaves and two fish. But what are they among so many people?’ Jesus said, ‘Make the people sit down.’ Now there was a great deal of grass in the place; so they sat down, about five thousand in all. Then Jesus took the loaves, and when he had given thanks, he distributed them to those who were seated; so also the fish, as much as they wanted. When they were satisfied, he told his disciples, ‘Gather up the fragments left over, so that nothing may be lost.’ So they gathered them up, and from the fragments of the five barley loaves, left by those who had eaten, they filled twelve baskets. When the people saw the sign that he had done, they began to say, ‘This is indeed the prophet who is to come into the world.’ When Jesus realized that they were about to come and take him by force to make him king, he withdrew again to the mountain by himself.”

Boyle grew up in a family of 10 people and “no one was thrilled with leftovers,” he said. “Five loaves and two fish to fill everybody, that is abundance and shows God’s longing to fill all of us.”

He told the congregation that we are living in a time “where we are shattering the narrative of racism, we are choosing to walk together as kin. As writer James Baldwin said, ‘This is us achieving ourselves.’”

Boyle often travels with trainees of Homeboy Industries. On a trip to Chicago he took Germaine and Jose, who together had spent almost half a century in prison. “It was only when we got into the car to go to LAX did I realize that they were from rival gangs. I prepared myself for a long five days.”

As they waited in line at Southwest Airlines, Jose, “in what the homies call a ‘loud-ass voice’ said ‘G, can I use airplane mode?’” Boyle said. He leaned in close and in an almost whisper said, “Once you get on the plane and the doors close, then you can switch to airplane mode.”

Jose turned to a woman, a stranger, and said, “I’ve never used it before.” The stranger looked at him and said, “Oh, OK.”

Boyle said, “Jose was inviting us into an infinite moment of abundance in the here and now; we were just occupied with propriety.”

On their fourth day in Chicago, Boyle dropped Germaine and Jose off at the Navy Pier to get gifts for their families. The next day, they showed him their gifts — bears from Build-A-Bear.

“Jose dressed his bear as a nurse because his lady is a nurse,” Boyle said. Jose had recorded a message in the bear, “I love you with all my heart. Come here and give me a kiss.”

As they all moved through TSA at the airport, they heard the bear say, “I love you with all my heart.” And when Jose put his dufflel into the overhead bin, the bear said “Come here and give me a kiss.”

Boyle said, “We laughed together. Those who wish to sing will always find a song. This was our song.”

One the way home, Jose told Boyle, “You know what my favorite part of the trip was? Getting to know this guy,” pointing to Germaine, who nodded in agreement, smiling.

Some weeks later, Jose came in to see Boyle. He had gotten word that his father was dying. Jose had not seen his father in 20 years and only spoke to him five days before his death.

“Jose has a twin brother, and at age 9 they made a pact that when their father came home, drunk, and started whaling on their mother, they would defend her,” Boyle said. “When the father came home, they jumped on his back and he fell over. But in his rage he got free and dragged them out to the street and said, ‘You are dead to me now. You will never enter this house again.’”

Jose and his brother lived in a local park, sleeping in a garbage can until they got into a gang. Boyle said, “They locked arms with other orphans and sold drugs. Jose walked out of prison after 24 years; his twin is still in prison.”

Jose called his father on his deathbed because he needed to forgive him. He did not want to carry the burden anymore.

He told Boyle, “In the six months I have been at Homeboy, I am enjoying the man I have become like I never have before.”

Boyle told the congregation, “Enjoy is an odd word. It is abundance, a word soaked in the resurrection.”

At the feeding of the 5,000 in John, multitudes enjoyed what they became. They were filled, like in Exodus, with supernatural food, with manna from the sky.

“Abundance means there is plenty for everyone. If we have more than we need, we build a longer table. Anyone who wants to sing will always find a song. Abundance, kin, us achieving ourselves,” Boyle concluded.

The Rt. Rev. V. Gene Robinson, vice president for religion and senior pastor of Chautauqua Institution, presided at the service, live from the Hall of Christ in Chautauqua. Joshua Stafford, interim organist for Chautauqua Institution, played the Tallman Tracker Organ. Amanda Lynn Bottoms, Chautauqua School of Music Alumna and currently the Washington National Opera Cafritz Young Artist, served as soloist. The organ prelude was “Adagio,” from Sonata No. 1, by Felix Mendolssohn. Bottoms sang the opening hymn, “Holy, Holy, Holy.” The anthem, sung by Bottoms, was “Thine, O Savior, is Love Unending,” by Martin Blumner, words by Theodore Baker. The offertory hymn was “My God, Thy Table Now is Spread,” sung by Bottoms. The tune was Rockingham and the words were written by Philip Doddridge and Isaac Watts. Bottoms sang the offertory anthem, “A Simple Song,” by Leonard Bernstein, words from Psalm 121 and 128 and Stephen Schwartz. The choral response was “God be With You Till We Meet Again,” sung by Bottoms. The organ postlude was “Allegro assai vivace,” from Sonata No.1, by Felix Mendelssohn. The program is made possible by the Samuel M. and Mary E. Hazlett Memorial Fund.