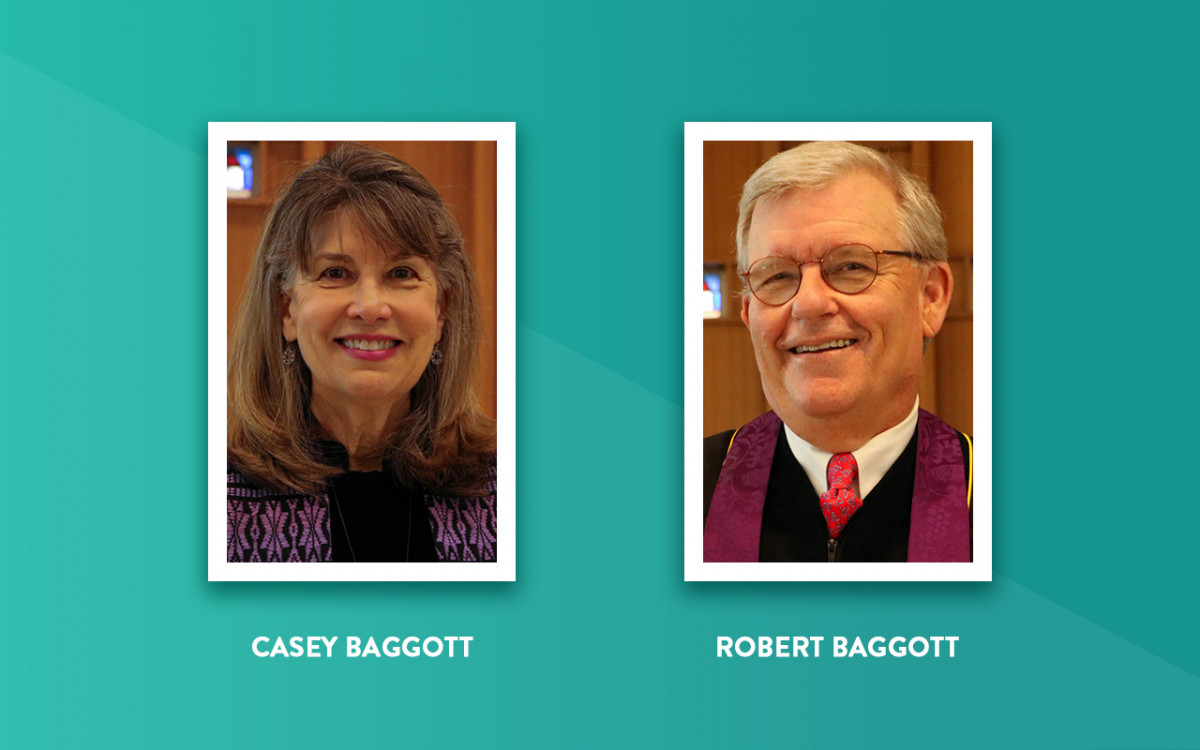 Learning how to worship and be the church during a pandemic has been as much a struggle for some parishioners as it is for pastors.

“For many of our members, it was learning how to respond to the service on a social platform,” said the Rev. Robert Baggott.

“It is not the technical difficulties; it’s just (that) our members have never done it before. They are used to hands-on and face-to-face,” said the Rev. Casey Baggott.

The Baggotts, a clergy couple currently serving a small church in Glencoe, Minnesota, are the upcoming Week Seven chaplains on the CHQ Assembly Video Platform.

Robert Baggott will preach at the 9:15 a.m. EDT Monday, Aug. 10, Wednesday, Aug. 12, and Friday, Aug. 14, morning devotional services on the CHQ Assembly Video Platform. His sermon titles will be “Demas: a Story of Persistent Devotion,” “Andrew: a Story of Confident Commitment,” and “Julian: a Story of Unshakeable Trust.”

“The theme for the week is ‘The Science of Us,’ so we decided to piggyback on that theme and think about ‘The Spirituality of Us,’” Casey Baggott said. “We chose five Biblical characters, and Julian of Norwich, to help us look at the character of spirituality.”

Bob Baggott explained how they develop a sermon. “We write everything together because each of us has our own strength. We both teach the text in a different setting, and then we come back together to write the final product.”

Whoever is preaching that week determines the course of the sermon and is the one responsible for leading the writing.

“It has worked for us,” Casey Baggott said. “There are not many clergy couples who write together.”

Her husband added, “We have different styles. Casey is reflective and I am boisterous, but people will tell us after church, ‘I just knew that you wrote that part.’ They learn our unique voices.”

In their congregation in Vero Beach, Florida, the Baggotts were familiar with social platforms and television. Bob Baggott said that was a benefit in leading their present congregation into the “techno age. The learning curve for the congregation was high.”

The Baggotts stream worship on Facebook, working with the congregation part-time, particularly to do worship. “The physical plant is large so people, will be able to come back in and be socially distant,” Bob Baggott said.

At first, the congregation did not have the capacity to do streaming. “We taped a cell phone to a mic stand and the phone kept slipping. But it has been popular with the congregants who don’t want to come; many choose to watch online,” Casey Baggott said.

This is a congregation that values being together, and they are grieving that they cannot be in the church. “There are life-long members who want to know when we can have fellowship hour,” she said.

Bob Baggott added, “It was difficult for us not to be able to announce that Aunt Mildred is having heart surgery on Thursday, because that violates HIPAA rules and we have to give the person privacy, because we are broadcasting on the internet.”

Casey Baggott wondered what would happen to churches as the result of the pandemic. “What will it mean for the gathered body of the church? I don’t know.”

“Casey and I are drawn to the energy of the people, not the camera. It is not engaging,” Bob Baggott said. He told a story about a minister who started to have outdoor worship with people in their cars and then an indoor service that was streamed. “She said she began to prefer the outdoor service because people would honk their horns when they heard something powerful. Inside, she could not surf on the wave of enthusiasm she felt outdoors.”

Currently, they’re sharing the role of interim minister at First Congregational U.C.C. Glencoe, Minnesota. Recently, both were appointed co-pastors of The Chapel at Lost Tree Village, a non-denominational house of worship in North Palm Beach, Florida. This appointment will begin in November 2021.

Casey Baggott has an undergraduate degree in psychology from the University of Minnesota, where she graduated Phi Beta Kappa, a Master of Divinity degree from United Seminary of the Twin Cities, and has received her Doctor of Ministry from the Graduate Theological Foundation, in South Bend, Indiana.

Bob Baggott graduated from Samford University in Birmingham, Alabama, where he was an Honor Initiate with Sigma Nu Fraternity, and New Orleans Baptist Theological Seminary receiving his Master of Divinity degree in 1984. He holds a Doctor of Ministry Degree from Graduate Theological Foundation, in South Bend, Indiana. Both have done additional study at the Summer Theological Institute at Oxford University, England.

Bob Baggott was one of 12 clergy chosen to be included in the inaugural Robert Schuler Institute of Preaching; was invited to preach at the National Cathedral’s Bethlehem Chapel at the anniversary service of the crash of Pan Am 103; and preached at the Ocean Park Temple Church’s 125th anniversary Celebration in Ocean Park, Maine. His honors include Religious Leader of the Year in Naperville, Illinois, and International Citizen of the Year by the University of Indianapolis for his work in Israel with Palestinian Christians.

Casey Baggott’s publications include two full years of liturgical prayers for the Clergy Journal, a sermon series for the Clergy Journal, and a sermon entitled “With Me” which was chosen for publication by the Library of Distinctive Sermons. She has also preached on the Day 1 Radio program on several occasions and has contributed faith articles to a local newspaper, 32963, for seven years.

Before going to Vero Beach, Casey Baggott worked in the areas of behavioral research, as a chaplain, and as a consultant in bioethics and spiritual ministries, as well as serving as a parish pastor. She was a member of the Women’s Economic Roundtable of Minnesota and served on the boards of directors of the Hope for Families Center of Vero Beach and Harvest Food and Outreach Center.

This program is made possible by Willow and Gary Brost & the Susan and John Turben Foundation.