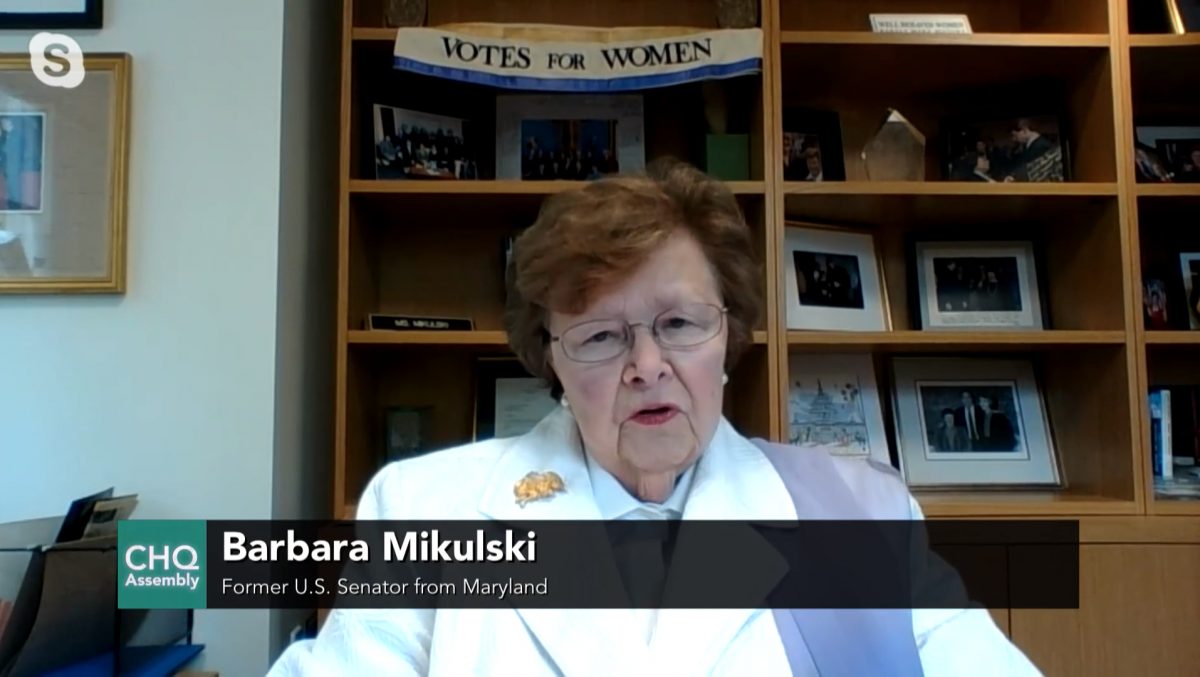 Studying history can show people what to do now, and Barbara Mikulski, the longest-serving woman in Congressional history, said that that work, “in terms of women’s history, … is often invisible, overworked, undervalued, and, quite frankly, (contains) too many hidden figures.”

Mikulski wants to “own the whole narrative,” in the women’s suffrage movement, including mistakes made in that movement.

“It was grassroots organizing at its very best … but at the same time it was (exclusionary),” Mikulski said. “There were … strains of racism and xenophobia that ran through it.”

In order for a democracy to work, she said people have to actively participate.

“Democracy is not a spectator sport,” Mikulski said. “We have to continue to work at keeping democracy going and expanding democracy in our own communities and beyond.”

Mikulski is a former U.S. Senator from Maryland, and is the longest-serving woman in Congressional history, a lifelong public servant, and is currently the Homewood Professor of Public Policy at Johns Hopkins University in Baltimore. At 10:45 a.m. EDT Friday, July 31, on the CHQ Assembly Video Platform, Mikulski finished the Chautauqua Lecture Series Week Five theme of “The Women’s Vote Centennial and Beyond” in conversation with Institution President Michael E. Hill on “How to Use This Anniversary to ‘Remember, Reflect and Recommit.’” Mikulski discussed the women’s suffrage movement, her time in the Senate and the support she received from female and male legislators.

Growing up in Baltimore, Mikulski did not think she could make a career in politics. She began her career as a social worker, but Mikulski realized the people she wanted to help needed more resources, and she needed to become an advocate for them.

“When you want to be an advocate, it takes you to politics,” Mikulski said. “Then politics took me to the great battles in the 1960s around voter registration and voting rights itself.”

Then in 1968, after the assassination of Martin Luther King Jr. and Robert F. Kennedy, former U.S. Attorney General, she wanted to take a break from public work and earn a doctorate. Along the way, she became aware of a plan in Baltimore to build a highway through communities of European immigrants, such as families from Poland and Italy, and also Black communities. Mikulski decided to run for Baltimore City Council.

“I got into the fight. I knocked on doors. Doors were slammed. I decided to open doors, … faced ridicule, faced obstacles, but, guess what? The people were on my side,” Mikulski said. “That’s my message today: That … politics is not a top-down thing. It is bottom-up.”

Mikulski said that men have always been a part of the women’s advocacy movement. She said that Frederick Douglass worked with Susan B. Anthony, though they did not agree on everything, such as issues of race and inclusion. John Lewis, she said, was one of the biggest advocates for women’s rights when he was in office from 1987 to his death this month.

When Mikulski first came to Congress, former Sen. Paul Sarbanes (MD-D) helped her gain positions on certain committees. During this time, she and former Sen. Nancy Kassebaum (KA-R) were the only women in the Senate, and she said men worked with her on legislation on the economic empowerment of women.

Hill asked what Mikulski’s prescription for society is now, to ensure women do not have to be exceptionally talented and qualified compared to their male counterparts in order to get a fair chance in elections.

She said that women continue to work to claim their power in society.

Many women run for political office because, Mikulski said, of their experience working at volunteer organizations, trying the improve that group and having their opinions dismissed. Similar to Mikulski, her friend, Sen. Patty Murray (D-WA), never thought of running for office, but when Murray was lobbying for better childcare legislation, a state senator told her she was “just a mom in tennis shoes.”

“She’s been running ever since,” Mikulski said. “As she runs, she builds up her entire community.”

Mikulski quoted Shirley Chisholm, the first Black woman elected to Congress: “If they don’t give you a seat at the table, bring your own folding chair.” Mikulski recommended that everyone look at educational institutions, such as public schools and public libraries in their communities, and to get involved.

Hill then asked how society’s faith in public institutions could be restored.

Mikulski said that this lack of trust can be seen in different times in history; people used to say in the ‘60s, “Don’t trust anyone over 30.” She said people need to question what information sources they trust, and ask if the source is educational or “propaganda in a steady, daily, corrosive effect.”

She said people have been questioning the work of scientists, amidst the pandemic and climate change. Because science can be validated through peer review and factual numbers, Mikulski said that it is a good starting point for rebuilding trust.

Hill asked Mikulski about former Vice President Joe Biden’s commitment to have a female running mate in his presidential bid, and what qualities Biden should be looking for in his vice presidential pick.

When Geraldine Ferraro became the first female running mate in U.S. history, she was one of Mikulski’s best friends in Congress.

“We thought we had broken a barrier. But again, it’s taken over 30 years to come back to this point,” Mikulski said.

She said she knows Biden will make the “right decision” because of the way he uses his core principles, and said that young Americans need inspiration. Mikulski said the passion that came from Lewis’ death last week was partly due to a need of society for inspirational leaders such as him.