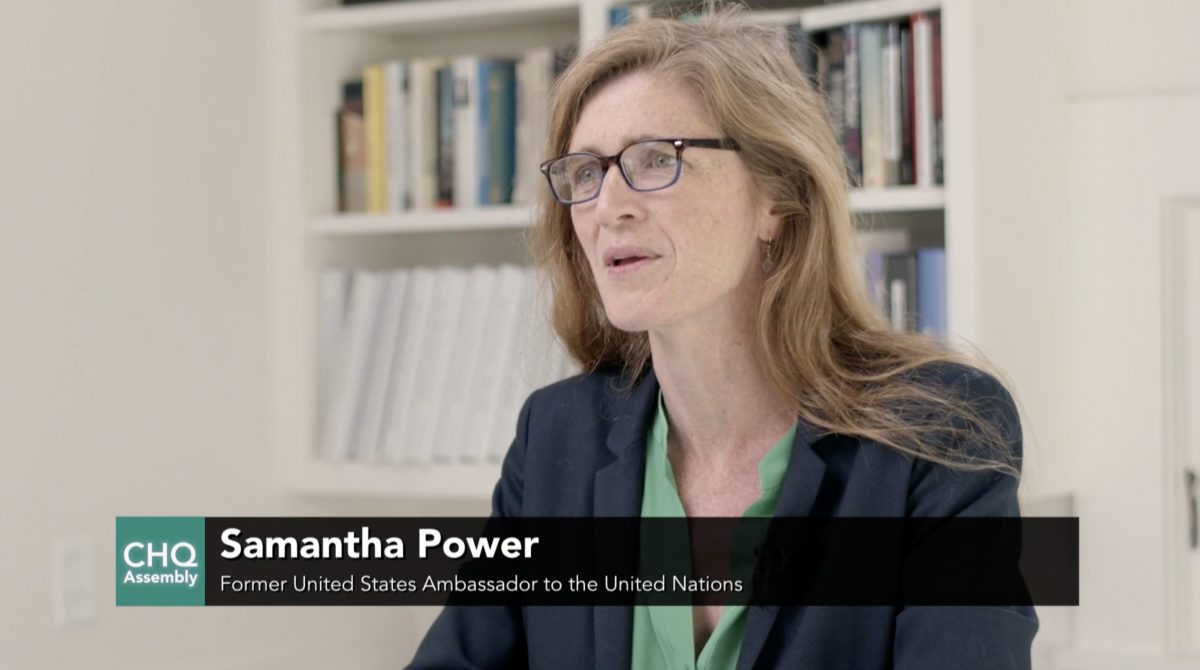 Of every role Samantha Power has served in her lifetime — diplomat, author, journalist, professor and scholar — none has been more meaningful than United States Ambassador to the United Nations.

During her time as ambassador, from 2013 to 2017, Power helped mobilize 70 countries to take on ISIS, brought into force the Paris Agreement, worked with Civil Society to get prisoners out of jail and supported President Barack Obama as he leveraged contributions to end West Africa’s Ebola outbreak.

In other words, Power said she has seen the indispensable need for diplomacy and what it can accomplish at its very best.

“The grim facts of the current moment help us appreciate just how important and how necessary diplomacy is,” Power said.

Power’s lecture, “America’s Role in International Engagement and Leadership,” closed the 2020 Chautauqua Lecture Series and the Week Nine theme in partnership with the United Nations Foundation, “The Future We Want, The World We Need: Collective Action for Tomorrow’s Challenges,” at 10:45 a.m. EDT Friday, Aug. 28, on the CHQ Assembly Video Platform.

Diplomacy is necessary, first and foremost, to end conflict. More countries are experiencing some form of violent conflict in modern-day than at any other time in the last three decades, Power said. And they aren’t just increasing in numbers — conflicts are also lasting longer. The average humanitarian crisis involving the United Nations lasts more than nine years.

“That’s almost double the duration of such crises as recently as 2014,” she said.

Conflicts often give rise to massive population movements, which are inherently destabilizing and have led to a rise in “xenophobia and nationalism across the globe,” according to Power. Close to 80 million people have been forcibly displaced across the world, this worst displacement crisis since World War II.

“Over the last decade, this number has essentially doubled, to the point that 1% of the entire population of the globe has been forced from their homes,” Power said.

“The commitments made under the 2015 (Paris Agreement) was a starting point, not a solution,” Power said.

Unprecedented drought and climate-induced migration already gave rise to two of the deadliest conflicts of the 21st century: the Darfur genocide and the Syrian Civil War.

“Even in places where climate change doesn’t cause violence, it is due to cause mass displacement on a scale that is hard to fathom,” she said.

In the face of COVID-19, Power said diplomacy is essential to coordinating global action, as she did with the Ebola outbreak in 2014. Power worked alongside diplomats from 50 nations to support West Africa in ending the outbreak, but since the beginning of the COVID-19 pandemic, Power said more than 90 governments have instead restricted exports of personal protective equipment, medicine and medical devices.

“It’s generating antagonism and a zero-sum mindset among nations to the detriment of individuals in need,” she said.

Despite the indispensability of using diplomacy, Power said the United States and other democracies have not invested sufficiently in that “lost art.” The Pentagon and armed services have 228,000 American personnel deployed outside of the United States. The U.S. Department of State? Only around 8,000.

“The Pentagon, famously, has only slightly fewer people serving in marching bands than (the state department has) diplomats,” Power said.

The “undervaluing” is apparent in a lack of proper funding as well, which Power said creates a self-fulfilling prophecy.

China, on the other hand, is making “gigantic investments” in diplomacy. China’s spending on diplomacy has doubled since 2013, at the same time the United States’ budget has stagnated.

To give a sense of the trajectory, when Power joined the Obama administration in 2009, China was the eighth-largest donor nation, contributing about 3% of the U.N.’s budget. Currently, they have passed Japan as the second-largest donor.

“I believe that building a strategic relationship with China is essential,” Power said. “It’s also going to be immensely challenging.”

China is doing more with its standing than “play defense,” Power said. China is promoting national sovereignty, an interpretation that “endangers the international human rights system.”

“China is spearheading an effort, welcomed by undemocratic nations, to redefine inalienable rights as state-bestowed privileges,” she said. “China is bringing relief to many governments.”

The key question becomes: What can be done? Power offered three ideas, presented with “humility, as the task before us is genuinely daunting.”

First, Power said America must strengthen the internal workings of its “democracy at home.”

Strengthening democracy at home begins with building the diplomatic core. Power said the Department of State is in crisis as many senior leaders have left, its mission is uncertain and “morale has hit rock bottom.”

Three years into the Trump administration, more than one-third of the top positions are vacant or filled by acting officials, such as the U.S. Ambassador to Ukraine, which has not had a Senate-confirmed ambassador since April 2019.

In filling the vacancies, Power said “we need to make the face of America look like America.”

“For as long as national security has existed, it has been a field dominated by white men,” Power said.

Since the country’s founding, fewer than 1 in 10 U.S. ambassadors have been women. No American woman has served as ambassador to China, Russia, Israel, Turkey or Afghanistan.

“More often than not, those (female) ambassadors have been posted to countries considered less critical to U.S. national security,” Power said.

After the murder of George Floyd, Power said many African-American diplomats began speaking out about the prejudice and discrimination they have faced. As the former U.S. Ambassador to Zimbabwe Harry Thomas Jr. put it, “You can set up all of the kumbaya panels you want, but until you see people of color being given opportunities, nothing is going to change except Band-Aids on surfaces.”

“The standard half-measures used to address these inequities just won’t do,” Power said.

Once those positions have been filled, Power said diplomats need to focus on supporting democractic transitions and strengthening alliances among democracies.

“The economic heft of democracies dwarfs that of even an economically potent China,” Power said. “The ability of China or Russia to silence any one country using its economic leverage is far diminished if we can coordinate our positions and stand up collectively on behalf of one another.”

Lastly, Power said diplomacy needs to take into account one of the most “underestimated forces” in politics and geopolitics: dignity.

Why did a Tunisian fruit vendor set himself on fire, igniting the Arab Spring? He felt humiliated. It was a matter of dignity.

Why have many Russians supported Vladamir Putin despite their country’s stagnant economy? Partly because they believe he has restored Russia’s status as a major player on the world stage. It’s a matter of dignity.

There have been more mass, non-violent movements around the world over the past decade than at any time in recorded history. What has been at the core of these protests, the peaceful resistance that helped bring down corrupt governments? Dignity.

In closing, Power revisited the 2014 Ebola outbreak, a time before the United States and Cuba had reestablished diplomatic ties. Nevertheless, one of the very first countries to heed president Obama’s call for global contributions was Cuba, which sent more than 200 medical professionals to the region. One of the doctors deployed was a 43-year-old Felix Baez Sarria, who was dispatched to an Ebola treatment facility in Sierra Leone.

Sarria contracted Ebola and was airlifted to Geneva where for two days, he drifted in and out of consciousness. He almost died, but with time, pulled through and ultimately chose to return to Sierra Leone to continue working.

“He said he needed to, that Ebola was a challenge he wanted to fight to the finish, to make sure it didn’t spread to other countries,” she said.

Power pointed out that to save his life, multiple nations had to come together. Sarria was initially treated in the clinic where he worked, which was built with the help of the United States. From there, he was transported to a clinic run by doctors from the British Ministry of Defence. Then, Sarria was airlifted to Switzerland aboard a plane operated by an American charter service. Upon arriving, he was treated with a Canadian-developed experimental treatment.

Every one of the stops on his itinerary was negotiated by people practicing diplomacy. To Power, diplomacy was used to make “(something) hard happen in the interest of a better world” — diplomacy at its best.

“It will not be enough to back to a point where we proclaim that diplomacy matters, nor even to say why it matters,” Power said. “Instead, we must treat diplomacy as a top line, national and global priority, rooted in a deep-seated, broad-based, whole new appreciation of the fact that our livelihood and our lives depend on it.”