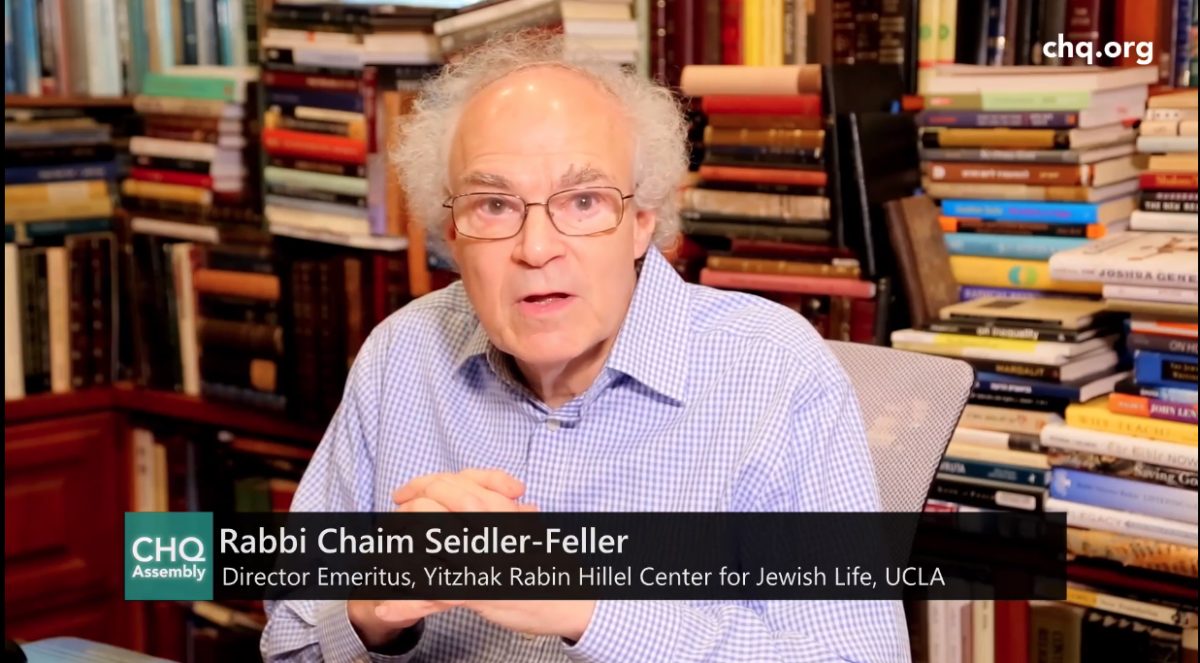 The story of creation in the first Book of Genesis is not science, Rabbi Chaim Seidler-Feller said. That doesn’t mean it should be discounted.

“It’s a religious teaching that proposes to inject meaning and value into existence,” Seidler-Feller said.

Quoting mystics, Seidler-Feller described Orthodox Judaism’s perspective on creation for Week Six’s Interfaith Friday at 2 p.m. EDT on Friday, Aug. 7. Vice President of Religion and Senior Pastor Gene Robinson joined him in a live conversation. Robinson addressed audience questions, submitted through the www.questions.chq.org portal and on Twitter with #CHQ2020, and his own.

Seidler-Feller is director emeritus of the Yitzhak Rabin Hillel Center for Jewish Life at UCLA, where he has served as executive director for 40 years. He was the founding director of the Hartman Fellowship for Campus Professionals and a founding member of Americans for Peace Now. Seidler-Feller still serves as a faculty member at the Shalom Hartman Institute North America and the Wexner Heritage Foundation. He also served as a rabbinic consultant for Barbra Streisand in the 1983 film “Yentl.”

In his lecture, Seidler-Feller quoted 15th-century Spanish rabbi Isaac Arama who wrote, “If the Torah was a science book, I have better and more comprehensive books of science on my shelf.”

“In other words, why would anyone want to reduce a tome of challenging, transformative, immoving and edifying — and sometimes troubling — ideas into a text full of scientific data and historic facts?” Seidler-Feller said. “The Bible answers the question of, ‘Why? And for what purpose?’”

The Book of Genesis outlines that nature, while humans are tasked with overseeing it, is a creation of God just as humans are. And humans, while all created in God’s image, are also all unique. In the Mishnah and Sanhedrin 4:5, it says that Adam was created for holy greatness. So whenever the blood of Adam is shed, it is also a crime against God.

It also calls for equality. When a master kills his slave, he has murdered a fellow image of God. And there is a noun in Chapter 2 in Genesis, usually translated as “rib,” that is later translated in Exodus as “side,” which suggests that God split Adam in two to produce Eve as an equal female, rather than being fashioned from a rib. Seidler-Feller said that this introduces sexual equality as a religious revelation.

Seidler-Feller also said that some Jews have chosen to become vegetarian because of two quotes. Chapter 1 of Genesis reads, “See I give you every seed-bearing plant that is upon all the earth, and every tree that you see bearing fruit. They shall be yours.” In other words, humans should avoid the killing of God’s creatures.

And in Chapter 11, Isaiah said, “The wolf shall lie down with the calf. The beast and prey, together with the little boy to herd them. The calf shall graze, their young shall lie down together and the lion, like the ox, shall eat straw.”

But the creation of the world in seven days should not be taken literally, Seidler-Feller said.

“The lesson is not that the world was created in six days, and then God rested on the seventh and therefore we must celebrate the Sabbath,” Seidler-Feller said. “Rather, because the Torah has innovated the Sabbath and added a day onto the Mesopotamian six-day cycle that neatly fit into this 30-day month, the Torah wants to sanctify and immorialize this seven-day pattern and present it to humanity as a divine mandate.”

Seidler-Feller said this was regarded as innovative at the time, because no other belief had instituted a day of rest for all, including those enslaved. This goes against the concept of a life’s purpose to toil, while the Torah called for people to fulfill their life’s purpose in the name of God. The Sabbath is meant to be a day of spiritual creativity — ideas, learning, meditation and contemplation.

In the past, the Roman hegemony accused the Jews of ruining the economy. And Seidler-Feller said that the pressure to work without end persists to this day. When he first started working at UCLA and had a group of students introduce themselves, he realized they characterized themselves by their work.

“They were stuck,” he said. “They couldn’t talk about themselves. They understood their value, their identity as being linked to their professional achievements.”

Making time for shalom — for peace — on Shabbat, Seidler-Feller said, allows people to think about how they can bring peace into the other days of the week.

“We need the Sabbath revolution more than ever,” Seidler-Feller said, “not just for Jews. It’s a day of renewal, of overcoming our total subjugation to our insatiable appetite for more, and our complete submission to technology.”

At the same time, there must be a return to physical creation on the other days of the week.

“We are humanly incapable of living on a purely spiritual level,” Seidler-Feller said.

The Habdallah, which marks the end of the Sabbath, marks the distinction between the spiritual and the physical and reintroduces humans to the holy task of building the world.

Both Seidler-Feller and Robinson agree that God made humans as “co-creators” to enhance what God is or what the world is. While Robinson said that most people he spoke with were shocked by this, Seidler-Feller said this was a common belief among Jewish mystics throughout history.

“There is a sense that God wants humanity,” Seidler-Feller said. “God needs humanity.”

In Genesis, Seidler-Feller said, the lesson in Chapter 2 is that it is not good for humans to be alone, or for God to be alone. Robinson agreed.

“One without the other would be a distortion,” Robinson said.

Seidler-Feller said it’s important to look beyond technicalities of the text. In the Garden of Eden with the forbidden fruit, he said the original sin was not the classic story of human violation and punishment but the loss of innocence — it was inevitable for humans to eat the fruit. Through creation, there is some destruction.

“If we build a house, we destroy some trees,” Seidler-Feller said.

The story, he said, is a lesson to balance destruction and creation as well as a lost dream that is meant to be held as an aspiration to return— in small steps — to harmony with God.

Part of that is to maintain community and connections with others. Both Seidler-Feller and Robinson said that attendance in faith groups they led had increased while using Zoom, highlighting the need to care for relationships and communities. This touched on Seidler-Feller’s final message.

“It is not good for a human being to be alone,” Seidler-Feller said.