America at crossroads: Rabbi David Saperstein guides where to turn next 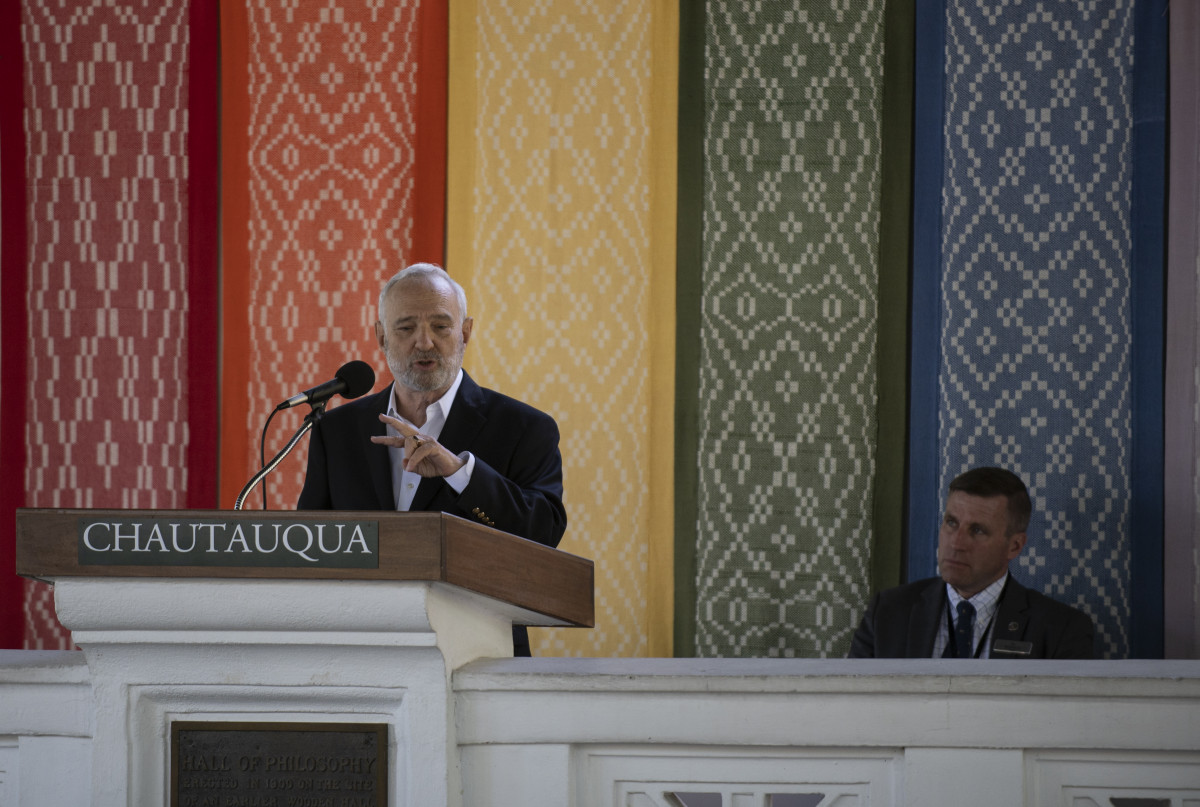 Is America lost within a tangled web of winding roads?

As the country questions how to navigate myriad diverging paths and issues, including the ongoing pandemic, the Russia-Ukraine war, refugee crises, climate change issues and a decrease of the separation of church and state, it is hard to predict what will happen next.

Rabbi David Saperstein addressed these concerns as he opened the Interfaith Lecture Series at 2 p.m. Monday, June 27, in the Hall of Philosophy.

The Interfaith Lecture Series theme this week is “America’s Global Conscience.” Saperstein’s lecture, “The World at a Crossroads: Religion’s Insights and Priority, Concerns and American Foreign Policy,” touched on how the United States should navigate national and international issues, as well as what its role should be in the world.

“Saperstein (is) a longtime friend of Chautauqua and a personal friend of mine, … designated by Newsweek as the most influential rabbi in America and by The Washington Post as the ‘quintessential Washington religious lobbyist,’ ” Hill said.

Saperstein has served in many high-ranking positions that advocate for religious freedom, including 40 years as director of the Religious Action Center of Reform Judaism. He also served as the United States ambassador-at-large for International Religious Freedom during President Barack Obama’s administration.

At Chautauqua, Saperstein’s role was to question how America will navigate the many crossroads it is facing and how these choices will impact future generations.

“Sometimes, the implications and the choices to be made are obvious, as so many seem to be today,” Saperstein said. “For others, only in hindsight do we see with stunning clarity the consequence of having chosen one among the diverging roads before us. Do we not sense today that we are facing such consequential crossroads in our nation?”

Saperstein said the United States is facing “the most fundamental decisions about the role of government in securing the economic and social well-being of its people.”

When it comes to the refugee crisis and America’s recent immigration policies, Saperstein feels as though the United States “seems to be diverging onto a path leading back to some of our most xenophobic years.”

Saperstein also touched on gun violence and said that America has failed to pass stricter gun laws as it lies stranded in the crossroads.

“Even with the passage (of the House’s bipartisan bill on gun safety) this past Friday, are the first constructive gun regulation legislation in over 25 years, we have not deviated from the path of rampant gun violence that … brings deadly violence into every corner of American life — our businesses, our houses of worship, our playgrounds, our homes,” Saperstein said. “We can fashion only the most anemic solutions to our bloodiest problem (and that) remains one of the great moral failings of our nation.”

Saperstein shared his concerns with the appointment of more conservative judges in the U.S. Supreme Court who are willing to undo precedents that have strengthened Americans’ civil rights and liberties.

“(The Supreme Court judges are) all too willing to undo the great achievements of … reproductive rights, dismantling Americans’ distinctively strong separation of church and state that together have given religious minorities, including my own Jewish community, more rights, more freedoms, more opportunities certainly than we Jews have ever known in our people’s long diasporic history,” Saperstein said.

Beyond the domestic dilemmas and downfalls of the United States, Saperstein spoke on the Russia-Ukraine war. His concern lies in the threat of nuclear destruction that will harm “the fruits of God’s creation” as Russia’s invasion brings us “closer to the brink of nuclear war than we have been since the Cuban Missile Crisis.”

Saperstein also provided statistics of poverty and displaced people, saying that over 2 billion people are in serious poverty as they make under $3.10 a day. Additionally, Saperstein said there are over 80 million displaced people — more than ever in recorded history.

“America has seemed to be, in some ways, withdrawing from its historic leadership, … leaving a vacuum, which as we gather here is increasingly being filled by China (and) Russia,” Saperstein said.

Saperstein then turned the conversation to how religious themes have been part of American foreign policy in the past, such as with the Monroe Doctrine and America’s imperialist instincts.

Saperstein said that the white, capitalistic colonialism from the 18th to 20th century acted as a justification for “civilizing and Christianizing the unbelievers.”

From this, religion and faith have been used as excuses for hate and division, Saperstein said. But at its core, religion has the ability to solve many of the issues the world is facing today. There is more interfaith cooperation across the globe today than ever before.

Drawing from the history of Jewish tradition and other religions, he said there is a repeated emphasis on equality, and that religion has been the main catalyst for universal education, promoting the sacredness of human life and free will, and the message that humans are all brothers and sisters.

“Never forget, if human rights and democracy collapses, there will be no religious freedom in which religions can flourish and act as a light to the nations,” Saperstein said.

The last segment of the lecture was dedicated to three examples of where America needs to lead next, and where religion’s indispensable role intersects these decisions.

Economic justice and debt relief was first on the list.

“In the ’80s and ’90s, economists had identified the debt burden on the poorest nations as one of the greatest moral and functional dilemmas of the contemporary international order, but nothing happened,” Saperstein said.

Religion has supported debt relief through the Jubilee Campaign and other projects. But the aftermath of the pandemic has allowed debt to reach record levels again. The United States Agency for International Development has stepped up and begun to take action effectively to strengthen outreach programs.

As the Russia-Ukraine war refocuses attention on nuclear and biological warfare, Saperstein’s second point was the prevention of and disabling of these weapons. There are several other threats of nuclear use across the world, spanning from Israel to Pakistan to China.

“The total number of nuclear weapons in the world has dropped from 63,000 in 1987 to under 10,000 today. We can make a difference,” Saperstein said, “but we must act now. And that can’t be done without America’s leadership.”

“(If) the entire world consumed the calories and energy that we use in the United States every day, there wouldn’t be anything for 80% of the world. This has to stop, and that requires both vision and political will,” Saperstein said. “The United States makes an extraordinary difference in the outcome of that.”

Saperstein closed his lecture with the words of Abba Eban, an Israeli statesman. He emphasized humanity’s moral strength and destructive rage with a call to action.

“The choice is ours. … I have said before you this day, the blessing and the curse, life and death, choose life that you may live — you and your children after you,” Saperstein said. “There is another possibility of an ordered world illuminated by reason, governed by law. And if we cannot yet touch (it) with our hands, let us at least grasp it with our vision. Grasping this firmly must be America’s role in the world, for in 2022, it is a vision the world so desperately needs today.”