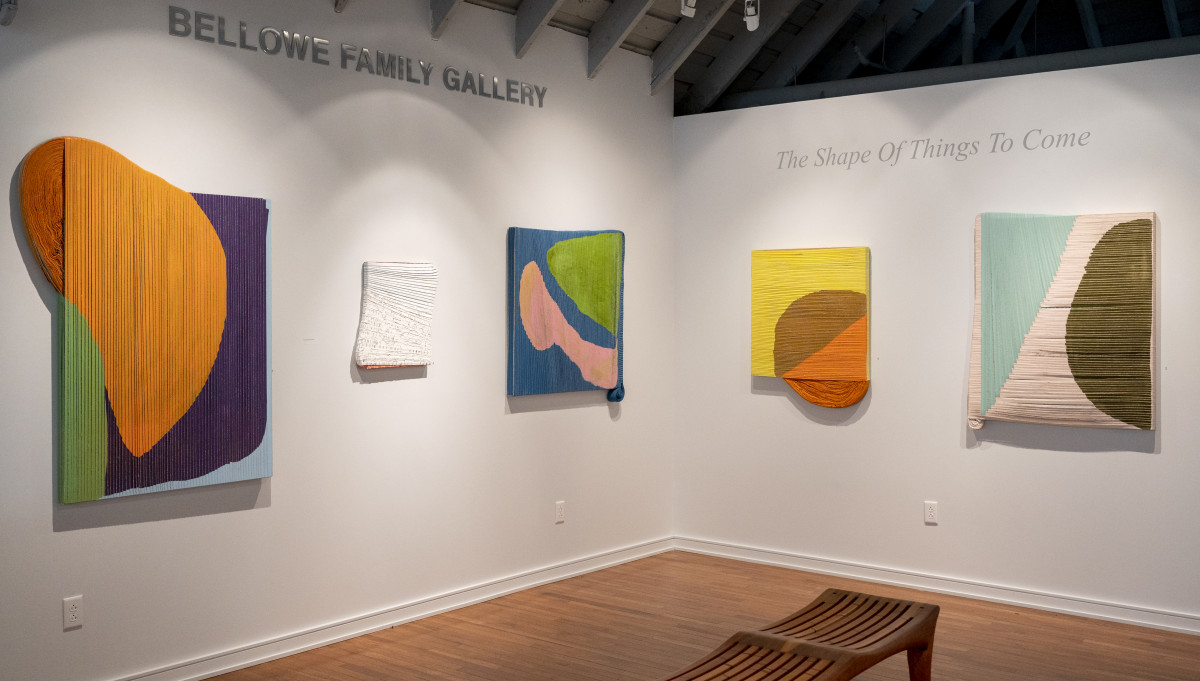 With cans of paint, a brush and a canvas, artist Jean Alexander Frater is redefining what it means to be a painter.

As the owner and director of the artist-run project space Material, based in Chicago, Frater is working to put the canvas in the spotlight. Frater’s work accentuates the overlooked beauty and power of the canvas: a material that has traditionally taken a supporting role in the painting process.

Her work is being featured in an exhibit titled “The Shape of Things to Come,” which opens with a reception at 3 p.m. Sunday, June 26, in the second-floor Bellowe Family Gallery of the Strohl Art Center, and runs through July 21. In the exhibit, the canvas becomes the main focus of every piece.

“The canvas is often called a support in painting terminology, because it supports,” Frater said. “The canvas is the hidden part of a painting; it’s usually just there to support.”

Frater is breaking the norms of painting, though, by giving the canvas the leading role. In her work, the canvas becomes more than just a background or a support system for the paint. She prioritizes the canvas, the body and bones of her work, over the paint itself.

In the world of painting, Frater said the paint and the brush have traditionally taken precedence over the canvas hidden behind it. She is working to change and equalize this dynamic.

“I wanted to give preference to the canvas, the support, because I liked the metaphor of a supporting role becoming a leading role,” Frater said. “When I started working this way, I sort of broke down the hierarchies of painting.”

Frater uses the three traditional materials of painting: a brush, paint and a canvas. Unlike other painters, she tears each of her canvases into strips and pieces them back together, adding texture to a traditionally flat surface. She treats the surface of her canvas like fabric and “disrupts the surfaces” she paints on. The ripples that result from the tears she creates have become a signature part of her artistic style and vision.

Frater approaches painting “as an object rather than a picture.” Her work juxtaposes sculpting techniques with painting qualities.

“I like to have these different polarities of the work existing together,” she said. “The pieces are paintings, but they are also sculptural. Different colors come out when you move around them. Shapes hang out and bulge out. I like the hybridity, two kinds of things being presented together. It doesn’t have to always be one or the other.”

Instead of using the traditional rectangular and square canvases, she prefers to use abstract-shaped canvases.

Frater allows the shapes of her canvases to develop organically. And she doesn’t limit herself to a specific shape — her work challenges the idea that a canvas even has to be square or rectangular.

“I didn’t want to start with a specific shaped canvas in mind,” Frater said. “I thought of the spaces of color in my work as landmasses or little bodies that have their own voice and that can grow out of the rectangular spaces. Some of the shapes outside of the rectangle are strips ripped from the same canvas layered on top of themselves.”

By layering pieces of the canvas around the central shape, Frater creates the idea of movement and growth outside of boundaries, and she challenges the idea that a canvas has to be a clearly definable shape.

“Just by presenting myself with a different shape, it’s almost like you are sidestepping the problem of the rectangle,” Frater said. “I wanted to give the idea of movement, growth and that the shapes don’t fit into the space.”