Rt. Rev. Mariann Edgar Budde: When the call to be brave comes, trust more in the Spirit 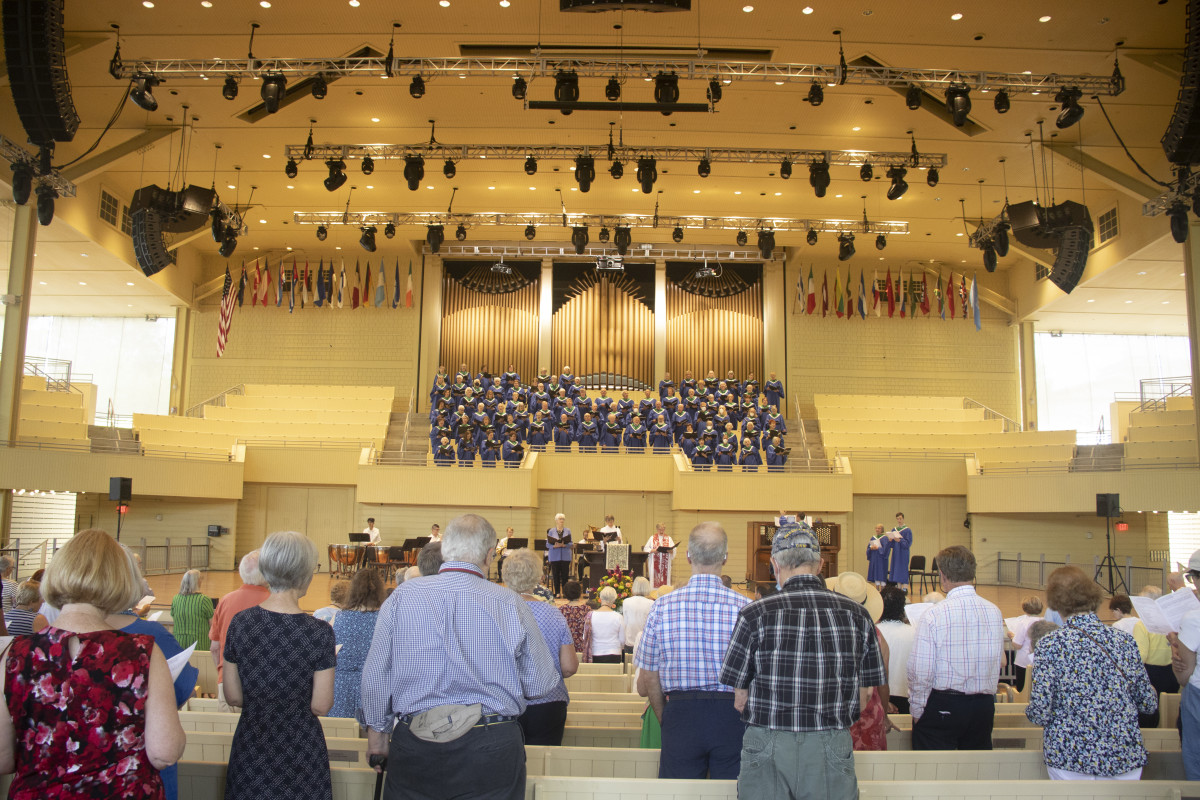 “My theme this week is exploring how we learn to be brave,” said the Rt. Rev. Mariann Edgar Budde at the 10:45 a.m. Sunday, June 26, Service of Worship and Sermon in the Amphitheater. “We want to be decisive, we want to be brave and do the right thing. We want to speak with clarity and conviction. I love thinking about those things.”

She told the story of Fr. Gregory Boyle and the start of Homeboy Industries. Boyle, a Jesuit priest and preacher for Week Four this season, was assigned to the Dolores Mission in a part of Los Angeles where gang violence was highest. Boyle was looking for a way to address the violence and decided that an alternative middle school was a solution. The only logical site for the school was a convent that housed six Belgian nuns. Boyle asked them if they would mind moving out so he could turn the building into a school. They said, “Sure.”

“Homeboy began with one word,” Budde said. “Like the nuns, we often make decisions on the spot. We bypass thought and respond with instinct. Immediacy is the defining characteristic.”

Baseball is a team sport, she said, but stepping up to the plate is a solitary experience.

“How did this action become a metaphor for doing what needs to be done?” she asked the congregation. “It became my mantra at the beginning of the pandemic. I received an inordinate number of requests for help, small and large.”

It was not just the quantity of requests, but the intensity and desperation in the asking, that had changed.

“Personal fatigue was not the most important data point. It was time to step up and do what needed to be done,” she said.

Budde’s ministry is bilingual, in English and Spanish. To step up to the plate does not translate well into Spanish. “Step up to the plate” in Spanish sounds more like “step on the plate.” “Toma al toro por los cuernos” means take the bull by the horns, and “poner campana el gato” means to bell the cat. These phrases explain the metaphor better.

“From the outside, a person seems to be acting decisively,” Budde said. “But internally, it is more like muscle memory. This happens especially when we are asked to do what we are equipped to do, what falls into our skill set.”

There are times when people with the right skill set can do with ease what might be more difficult for others. It might be costly in terms of time and energy, but it rarely causes exhaustion.

“They are functioning from strength,” Budde said.

She recalled scientists at the National Institutes of Health who were close to a breakthrough for a treatment for a lethal form of leukemia.

“They gave up being with families and worked around the clock so others could live,” she said. “The epidemiologists who developed the COVID vaccine had the same tenacity.”

Another way of stepping up is having a sense that you are the person who must act. Martin Luther King Jr. knew he had to go to Memphis, Tennessee, to support sanitation workers fighting for safe working conditions and living wages.

“He knew it was his to do. It may not necessarily be what we want to do, but we can, so we must,” Budde said.

In Luke 4:14-21, Jesus read from the prophet Isaiah 61:1-3, that the spirit of God was upon him to preach the good news to the poor, to preach the acceptable word of the Lord.

“Jesus told his hometown congregation, ‘I am that person.’ He did not say it with arrogance but with clarity,” Budde said. “At first, his community was proud of him, but then they were furious. They tried to throw him off a cliff. Neither reaction really mattered to Jesus; he knew what he was here to do.”

A more common reaction for people when called to step up to the plate is to feel the call, but also feel anything but ready — they think they can’t do it but are asked anyway.

“Read the Bible. There are countless stories in the Hebrew and Christian texts about people who tell God why they are the wrong person for the task,” Budde said.

Moses had a stutter, Jeremiah was too young, Isaiah was not good enough, Peter was sinful.

“In each case, God responded ‘I know your shortcomings. Step up anyway,’ ” Budde said.

In the story of Esther, her uncle Mordecai asked her to speak to the king about the plot against the Jews in the kingdom. Esther told him she could not go to the king without being called to his presence because she would be killed. Mordecai responded that she may be queen for such a time as this. Esther tells him to fast and pray for three days, that she would do the same, and then she would go to the king.

“When God calls or life summons us, it is normal to feel unprepared,” Budde said. “We simply have to do what needs to be done, and God will fill in and make up for our inadequacy.” Yet, there are times when there is no miracle.

“This is when we feel the grief of our incompetence,” she said. “If we face our failure with humility and accept it as growth, it can become part of our larger narrative, and we can move on so the next time we can step up with more confidence.”

She told the congregation that when we are mired in our contradictions, the way out of the quagmire of self is to do something for someone else. This action can give our lives new meaning. She cited the story of Jacob wrestling with an angel before having to face his brother, Esau.

“Jacob was a liar and a thief. He wrestles with God and asks for a blessing, and the blessing sustained him throughout his life,” Budde said. “He did not change, but he answered God’s call to take his place in the lineage of God’s people. God will take whatever we have to give.”

Budde shared a time in her life when she was rescued by a call to do something for someone else. She was feeling end-of-summer sadness and did not want to go back to work. Then, she remembered a neighbor was organizing a yard-give-away for immigrant families. She packed up her car with donations and went to the site in a basketball court surrounded by high-rise buildings.

“When the gates were opened, it was like Christmas morning. I helped an elderly lady, carrying her bag for her. Maybe what I gave away was of some help, but what I got was priceless,” she said. “My spirit was lifted to a space of gratitude, and for a moment, I was set free. It was a grace-filled reminder that God sees us as we are. We step up, step out and do something, and thankfully, God is willing to work through us.”

In the wake of the murder of George Floyd in May 2020, Budde was called to speak out against President Donald Trump. St. John’s Episcopal Church, near Lafayette Square, had opened its doors to the protesters in the park. On June 1, 2020, Trump ordered the police and National Guard to remove people from the park; they used tear gas and billy clubs on the mostly peaceful protesters.

Trump then walked to the front of the church, surrounded by military men, and stood with a Bible in his hand.

“I did not have time to think. I got in front of as many microphones as I could to say that our sacred mantle was not his to use. He could not use our church and our sacred text,” Budde said. “I felt like I had been summoned to speak for others who were standing up for racial equality. I was riding a wave that was all-consuming, and then it was gone. If I thought there was anything more, I could be confused.”

“I wanted to step up like that, to be working for change,” Budde said. “I felt a new way to pray for grace and perseverance when passion ebbs and flows. We want to be brave, but we miss more balls than we hit.”

When called to act, trust in the power of the Spirit and accept the imperfect, she said to the congregation.

“When the call to be brave comes, we should trust more in the Spirit than in ourselves,” Budde said. “We don’t have to take on the whole world, just our corner of it.”

It is wonderful to meet God in the moment of change.

“I hope this will be encouragement for you,” Budde said. “When you are called to step up, there is more than you can see or feel. There is satisfaction when you take your turn, step up, take the bull by the horns, bell the cat — know you are not alone. You are part of the community of faith, the communion of saints, and the Spirit of the Lord called you for such a time as this.”

Michael E. Hill, president of Chautauqua Institution, opened the 2022 season with the traditional Three Taps of the Gavel.

The Rev. Natalie Hanson presided. Candace Littell Maxwell, chair of the Chautauqua Institution Board of Trustees, read the scripture. Joshua Stafford, director of sacred music and holder of the Jared Jacobsen Chair for the Organist, played Carillon de Westminster, Op. 54, No. 6 by Louis Vierne as the prelude. The fanfare was “Solemn Entry, TrV 224” by Richard Strauss, performed by an ensemble from the Music School Festival Orchestra and Nicholas Stigall, organist. It was directed by Stafford. The Chautauqua Choir, under the direction of Stafford and accompanied by Stigall, sang “O, for a Closer Walk with God,” music by Charles Villiers Stanford and lyrics by William Cowper. Nathan Coffman, an MFSO member from Knoxville, Tennessee, played “Taps” for the Chautauqua Milestones memorial. The offertory anthem, sung by the Chautauqua Choir, was “The Spirit of the Lord is Upon Me,” with music by Philip W.J. Stopford, words from Isaiah 61:1-3,11. The postlude was “Grand Chœur Dialogué,” by Eugène Gigout, arranged by Daniel J. Leavitt. The MSFO ensemble and Stigall at the organ were conducted by Stafford. This week’s services are supported by the Samuel M. and Mary E. Hazlett Memorial Fund.