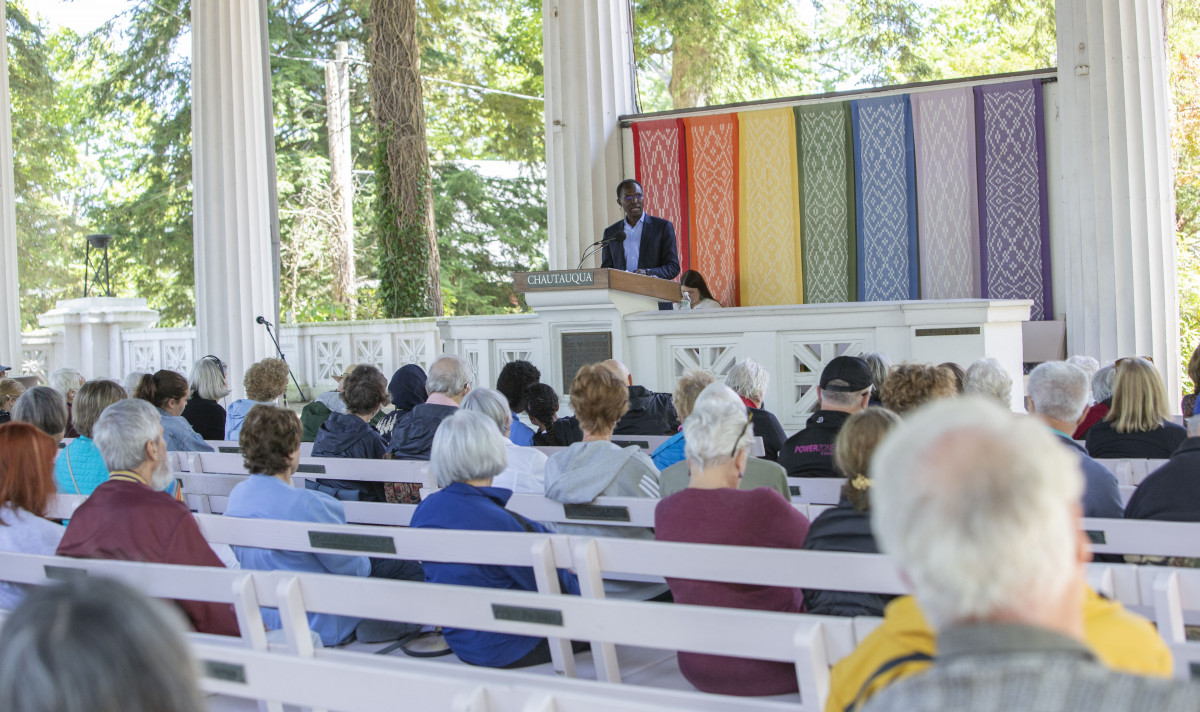 The world is more interconnected than ever before, yet its inhabitants seem to lack true understanding of one another. Mohamed Elsanousi has taken on this dilemma, and looks to the idea of shared virtues to promote righteous connection.

Elsanousi, executive director of the Network for Religious and Traditional Peacemakers, spoke Tuesday, June 28, at 2 p.m. in the Hall of Philosophy.  His lecture, “Unlocking our Shared Virtues: Advancing Common Good in an Interconnected World,” was a continuation of Week One’s Interfaith Lecture Series theme, “America’s Global Conscience.”

Melissa Spas, the new vice president of religion at Chautauqua, introduced Elsanousi to the Hall of Philosophy and online CHQ Assembly audience.

Elsanousi has made it his life’s mission to promote civil rights and religious freedom through building bridges between grassroots peacemakers and global figures.

Elsanousi has also served as the director of community outreach and interfaith relations for the Islamic Society of North America, as well as on the Core Group Taskforce for the Department of State’s working group on Religion and Foreign Policy.

This is Elsanousi’s first visit to Chautauqua Institution, and he brought his family with him to explore the grounds.

“I have immensely enjoyed my time learning from each and every one of the students and the people that I met during these couple of days. … We just felt we are at home here at Chautauqua Institution,” Elsanousi said.

Rabbi David Saperstein, the first speaker of Week One’s Interfaith Lecture Series, and Elsanousi are close friends, and their lectures correlated with one another in terms of interfaith collaboration.

“So not unlike (Saperstein), I am going to explore the nuances of faith, leadership and global events through my perspective as a person of Muslim faith, as someone who strives to support global sustainable peace through interfaith relations and interfaith cooperation, and as a person who adamantly believes that we as humans, as humanity, have more in common that unites us than divides us,” Elsanousi said.

To draw from one of the most impactful American civil rights activists and religious leaders America has known, Elsanousi quoted Martin Luther King Jr.’s renowned “I Have a Dream” speech.

Elsanousi delivered King’s impactful line, “This is no time to engage in the luxury of cooling off or to take the tranquilizing drug of gradualism,” to remind Chautauquans that urgency is needed in solving global equality issues.

Historically, curiosity and the pursuit of understanding have driven people to look outside of themselves and into a new world of culture and religion for centuries.

“This curiosity has been accelerated with the rise of globalization and interdependence, through the rising connectedness of economies, culture and communities,” Elsanousi said. “Empirical research suggests there is a strong correlation between diversity and pluralism, and the measures of economic, social and political development, meaning that … diversity and pluralism help to advance social progress.”

With “America’s Global Conscience” in mind, Elsanousi defined three concepts that hold value when discussing this theme: consciousness, integrity and freedom of religion.

“Defining consciousness, especially its protection and freedom, has been debated for centuries, and there is no conventional answer,” Elsanousi said. “However, what is broadly accepted today is the notion that (consciousness) is an aspect of human intellectual faculty that morally guides us to identify what is truth over falsehood, right versus wrong, and good versus evil.”

While Elsanousi said integrity is understood as truthfulness and a virtue, it is “defined by our conscience.”

“Living consciously is an intrinsic feature and demand of human dignity,” he said. “In order for us to fully flourish and utilize our potential, we must be autonomous, free, and not be embedded or stripped away from our natural rights.”

But the question remained, and Elsanousi rhetorically asked the audience: “What is the difference between freedom of conscience and freedom of religion?”

“The former concerns personal moral practices (and) convictions, while the latter is (a) faith-based example (of) protection of articles of faith, worship and rituals,” Elsanousi said.

Roger Williams, a colonial American religious freedom trailblazer from the 17th century, is known as “the father of religious freedom,” believed that “religion was a matter of individual conscience not to be regulated by a government,” Elsanousi said.

Williams’ work would later influence the Declaration of Independence and the Bill of Rights, and several Supreme Court rulings have referenced his ideologies.

When examining his own religion, Elsanousi spoke on how freedom of conscience and human rights are a central principles of the Islam faith. He cited the first chapter of the Quran, which states individuals should not be forced to accept Islam or any other beliefs.

“Another verse towards the end of the Quran … clearly states had your law so willed, all those who are on the Earth would have believed (in God) if God wanted them. So it clearly embodies this freedom of religion,” Elsanousi said.

Beyond Islam, various religions hold these ideologies, which interlinks the shared values of differing belief systems.

“I think we can all agree that we have the opportunity and responsibility to collectively recognize and celebrate our religious diversity,” Elsanousi said. “This has guided our communities for hundreds of years and (guided) how interfaith understanding and cooperation can support peaceful and inclusive societies.”

Speaking on America specifically, Elsanousi said this country has “one of the most complex and unique cultural identities. The rich and diverse history of this nation has evolved over time to define Americans, not only (by their) cultural identities, but rather by shared values.”

America has been looked at as a global leader for decades, but Elsanousi argued that the country is no longer seen as a leader of power, but as a leader of virtues and integrity.

“It is imperative that we lead by example. … While division within our country is not new, we cannot expect the United States to remain as a leader on the global stage if its citizens cannot represent their communities and lead by example,” Elsanousi said.

Elsanousi believes the government cannot solely resolve the division in the United States, and he recognizes that everyone plays a role in the advancement of the common good.

Elsanousi said there are several reasons why there is division, discrimination, violence and bias in America, and these harmful implications are based on “several factors, including negative media coverage, negative political rhetoric, and noninclusive social and cultural norms, culminating in widespread misinformation, fear and prejudice.”

To combat these adverse beliefs, he urged the audience to promote education and dedication to inclusivity.

“We know there is a correlation between conflict and lack of understanding. … Children are not born with predispositions of xenophobia, racism, sexism or bigotry,” Elsanousi said. “We will not be able to create a culture of peace unless we ensure that a child’s upbringing and education (is) inclusive of all gender, sexual orientation, races, ethnicities and disabilities.”

Recognizing shared consciousness and moral values to promote inclusivity can bridge the gap between awareness and understanding.

“America needs to embody the most powerful force: the army of moral strength,” Elsanousi said. “Through this, America will not only remain as a global leader, but it will be able to utilize our interreligious values and virtues to contribute to resolving the crisis the world faces today, and ensure an inclusive and prosperous society for all.”