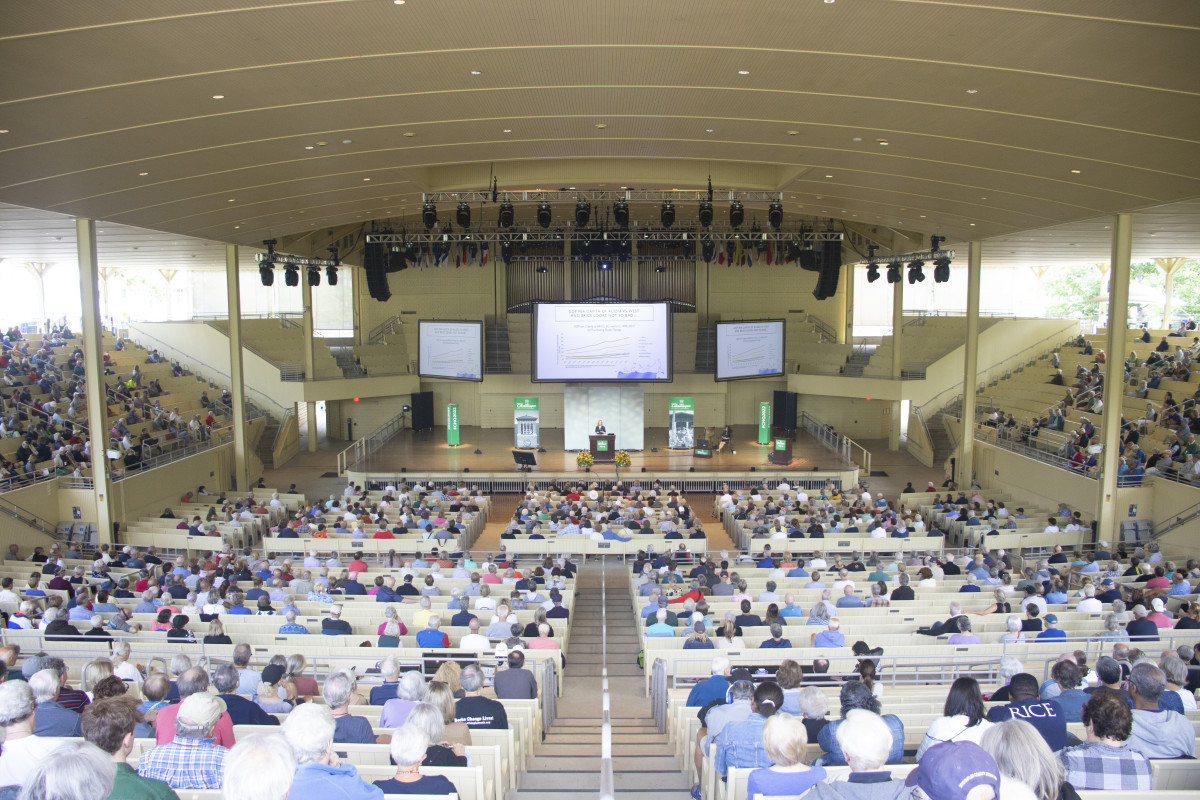 The question, Kathryn E. Stoner said, is not whether Russia has resurrected from the fall of the Soviet Union 30 years ago, but how the country now has great influence over the world. Despite trailing behind the United States and China in population and wealth, Russia has become a pervasive threat not only to Ukraine, but to democracy as a whole.

Stoner, a Stanford University political science professor, sought to answer this question in her lecture “Russia Resurrected: Its Power and Purpose in a New Global Order” at 10:45 a.m. Wednesday, June 29, in the Amphitheater. Stoner discussed Russian power and how the country’s influence can be interpreted in navigating the ongoing Russia-Ukraine war.

Stoner, a Mosbacher Director of the Center on Democracy, Development and the Rule of Law, and senior fellow of the Freeman Spogli Institute for International Studies, came to Chautauqua for the first time to discuss points from her most recent book, Russia Resurrected: Its Power and Purpose in a New Global Order, published in 2021.

Stoner’s book deviates from the traditional realist perspective that measures strength in men, military and money. Through Stoner’s theory of dimensions of power, she looks past the face value of Russia to examine subtle capabilities that give the country its influence over global politics.

Before Stoner even began her presentation, she had already received a standing ovation from the crowd after Moore revealed that, just a day prior to her lecture, the author had just been added to the list of over 1,000 Americans who are permanently banned from traveling into Russia.

Stoner began her lecture by briefing the audience on her tentative agenda for the hour, highlighting the key points she would touch on during the presentation, which began with studying Russia’s power, particularly in regards to Ukraine.

Putin sees Russia in a state of complete power and control over global affairs, where the United States perceives the country as being neither a “peer power,” nor an existential threat.

Stoner argued that one must examine Russia’s power not only relative to the country’s capabilities, but to the autocratic leadership under Putin.

“We tend to think of men, military and money when we think about power,” Stoner said. “But it’s actually much more expansive than that. (Russia Resurrected) really argues against the perspective that you cannot dismiss Russia as weak relative to the United States without thinking about what (Putin’s) goals are in international policy.”

With graphs as visual aids, Stoner displayed some general facts about Russia to set the backdrop for her lecture.

She showed the general trends of global gross domestic product per capita of major countries like the United States, China and Russia. Russia’s total population is 146.7 million people, including Crimea, which accounts for about 2.4 million people. While in 2019 the average Russian only made about $30,000, their quality of life was higher than that in China.

“When we think about Russian power, we have to think about strengths and weaknesses beyond just the size of the question, ‘How many people it has, and how much it expenses on its military,’ because it doesn’t stack up to the United States or China in either of those categories,” Stoner said.

In order to fully understand Russia’s current internal affairs, Stoner called for the audience to remember where Russia was 30 years ago.

“(Russia was getting) food aid, getting loans from lenders in a last resort, like the International Monetary Fund, the World Bank, the U.S., Europe, Germany,” Stoner said. “It had no private property. It had to go through a privatization process. It was moving from a planned economy to a market economy. People were looking for food in dumpsters in Russia. And now Russia is an existential threat to the United States.”

Another power Russia exercises well is its pipelines and permanent port in Syria on the Mediterranean Sea coastline, which allows major exports of oil to come from Russian oil fields.

Stoner said Putin’s leadership, and the lack of governmental accountability against him, are also factors to consider in weighing the power of Russia.

“He is uncontested, but that makes him fragile to a certain degree, and brittle,” Stoner said.

Stoner said that what Putin fears most is accountability and transparency, while also speculating his physical health may be taking a turn for the worse.

Putin justified invading Ukraine in 2014, and now in 2022, as a defense against the expansion of NATO into Russian borders; this has not occurred since 2008.

Russia’s military is also nothing to underestimate. As of Sunday, Russia occupied about 25% of Ukraine, including the Crimean Peninsula and most of the coastline of the Black Sea.

“We don’t know the final goal (of the war is),” Stoner said. “It seems to be fluid. Was it to take the whole part or was it to take part of the country? If there’s peace now, what happens to these newly occupied areas? And those are the biggest questions today.”

Ukraine is an important country to not only Europe, but the entire world. The country is the biggest exporter of grain and provides much of the world’s food. If Ukrainian exports are blocked, famine in North African countries and the Sahara could be likely.

Stoner concluded her lecture by laying out her recommendations for America’s efforts to help Ukraine.

“If we don’t support Ukraine, Russia will take it,” Stoner said. “They certainly have the capability. And most importantly, under Mr. Putin’s authoritarianism, they have the will to do it, at least for now.”

Stoner suggested the United States continue sanctions on Russia and, also, open American borders for both Ukrainians and Russians to enter.

“These are people who are voting with their feet and leaving their country, and there are opportunities for us,” Stoner said. “One of the policy issues here that we should grapple with is, yes, let more Ukrainians in, but also let those talented Russians in. Make it easier for them to come here, and they will have influence domestically.”

As the Russia-Ukraine war continues and dominates news headlines in the United States, Stoner asked the crowd to keep perspective of what the East has to lose.

“This is really a fight of good and evil,” Stoner said. “(Ukraine’s) ‘sin’ was trying to become a liberal democracy and seeing its future in Europe as opposed to Russia. It is about democracy. We have it. We have to fight for it. We have to be the example for people who are putting their lives on the line to get it.”