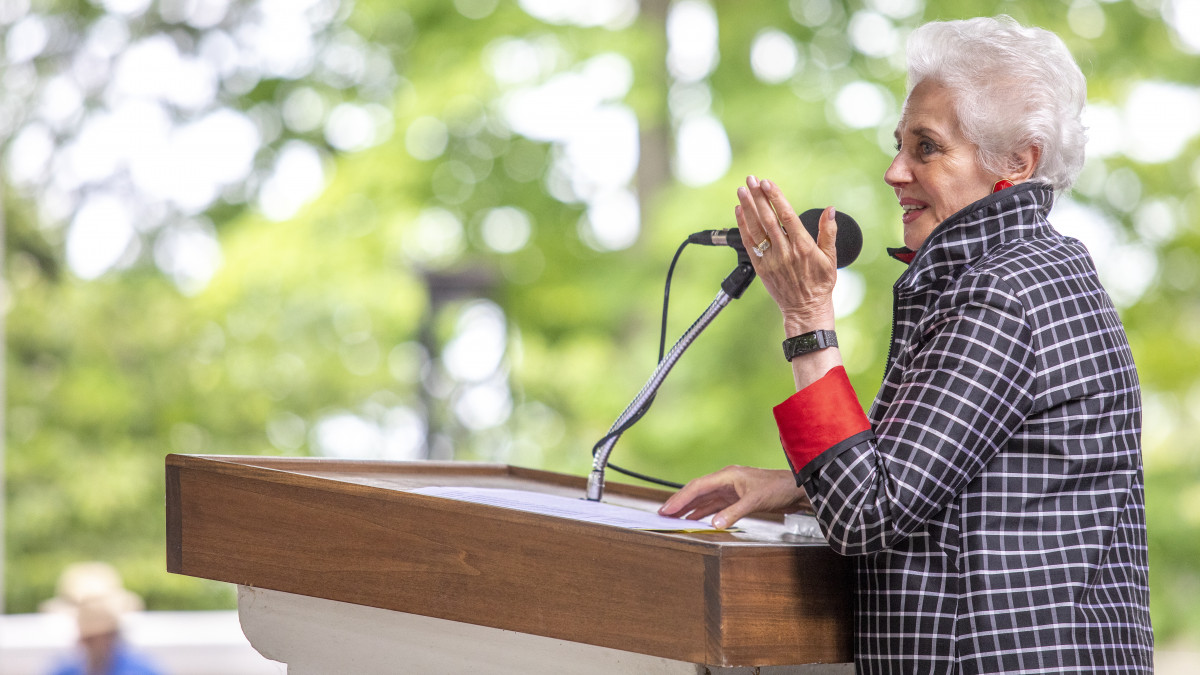 Many individuals feel helpless when trying to take meaningful action and make change amid issues much larger than themselves. But Georgette Bennett, who founded the Tanenbaum Center for Interreligious Understanding in 1992, recognizes how much power one individual holds.

Bennett has experience in a variety of fields, including sociology, journalism and philanthropy. She is a published author, and her main focus is on conflict resolution and intergroup relations.

In 2013, Bennett founded the Multifaith Alliance for Syrian Refugees, which has worked to raise awareness of the Syrian war and mobilize more than $250 million of humanitarian aid to benefit more than 2.7 million Syrian war victims.

“Most of my family perished in the Holocaust,” Bennett said. “It may seem counterintuitive for me to take on the cause of Syrian war victims because most likely, they want to see every Jew dead and Israel driven into the sea. It’s not their fault. That’s just the way that they’re indoctrinated from childhood on.”

Her journey of supporting Syrian refugees proved that “even sworn enemies can see the humanity in the other.”

Bennett’s journey began in Budapest in 1946. As a result of World War II, many cities in Hungary were demolished, including Bennett’s home.

“During the siege of Budapest, 38,000 civilians died of starvation and bombings. My own mother lost a pregnancy lugging a sack of rotten potatoes home because there was nothing else to eat,” Bennett said.

She recalled the helplessness of 937 Jewish refugees who embarked on a journey of asylum on the S.S. St. Louis in 1939. They were denied landing in Cuba, Canada and Miami.

“They had no choice,” Bennett said. “The ship had to turn around and go back to Europe, where 300 of its passengers perished in the Holocaust. And the silence of the world was deafening.”

The horrific memories of the Holocaust resurfaced as Bennett saw the Syrian crisis unfold and countries closed their borders to refugees.

“When I was given gruesome photographs documenting the torture of Syrian civilians, how could their emaciated and eviscerated bodies not put me in line with my parents, my grandparents, uncles and aunts who were imprisoned or literally went up in smoke in Auschwitz and Mauthausen and then other camps?” Bennett said.

Bennett felt the need to step up and help those suffering in Syria, as their suffering echoed her own family’s suffering in the Holocaust.

“If I was to be true to the post-Holocaust admonition ‘never again,’ then ‘never again’ had to include my fellow human beings in Syria,” Bennett said.

But Bennett was just one person trying to create change within the huge Syrian humanitarian crisis. She needed to find an entry point and a gap that was not being addressed by large international organizations or governments.

She recognized that if she were to look at the crisis on a big-picture scale, she would be “paralyzed into inaction,” so she decided to focus on mobilizing a response from the American Jewish community. Once that was accomplished, she worked to organize a large interfaith response in the United States. That was when the Multifaith Alliance for Syrian Refugees was born. The alliance now has over 100 partner organizations.

Bennett began to share several grim statistics that show how many Syrian citizens have been impacted: 11 years into the conflict, 80% of Syrians entered poverty, life expectancy dropped from 80 to 56, over 500,000 people have been killed, 11 million are urgently in need of aid, and half of Syria’s population is displaced. Women and children make up 80% of Syrian refugees.

The list goes on, and the longer it goes, the more evident it becomes that Syria desperately needs help.

After founding the Multifaith Alliance for Syrian Refugees in 2013, Bennett visited Zaatari refugee camp, which is located less than 10 miles from the Syrian border with Jordan. The camp houses 80,000 refugees, making it Jordan’s fourth largest city.

“I expected to see a place of abject misery, and there was much of that — large families living in small tents or caravans with sparse furnishings. … But what I did witness was a startling affirmation of life and the building of the spontaneous, self-organizing community — a testament both to the resilience of Syrians and the hospitality of Jordanians,” Bennett said.

In the face of uncertainty and horror, Syrians host an array of shops and small businesses that sell everything from hardware, baked goods, bridal gowns, shoes and much more. The line of successful merchant tents has been coined “Champs-Élysée” after drawing similarities of its bustle to one of Paris’ most famous streets.

As Syrian refugees work hard to create a new life for themselves in the face of war and displacement, they will likely spend over a decade searching for permanent asylum, as the average time of displacement is 10 to 26 years.

In December 2012, the Assad regime, the ruling governmental body in Syria, was accused of using chemical weapons against its own citizens.

After 10 months of chemical warfare in Syria and political discourse on a solution, the Obama administration approved a plan that allowed Russia to enter Syria and remove the chemical weapons.

“In that one act, Obama handed Syria to Russia, shifted the balance of power in the world and empowered Russia to do everything that followed: the annexation of Crimea in 2014, the invasion of Ukraine this year and the unrelenting air war for 11 years … that has destroyed the civilian infrastructure in Syria,” Bennett said.

Trump’s failures of American global conscience include his Muslim travel ban and tightening of American borders.

“In the end, Trump unilaterally whittled away the U.S. presence, gave up U.S. leverage to Turkey without getting anything in return, and left valuable allies high and dry,” Bennett said.

The impacts of the Obama and Trump administrations’ handling of Syria had immediate and lingering impacts that will continue for years.

“When Trump left office, he left behind a largely dismantled infrastructure for processing refugees,” Bennett said. “So even in a more benign Biden administration, there are 29,000 fully vetted Syrian refugees in the pipeline who have been waiting for years to be resettled, and that makes the mobilization of individual conscience even more important in helping to make things right.”

Bennett recognized this need and was able to mobilize a group of like-minded thinkers to support Syrian refugees. But for the benefits to be reaped and come to fruition, it had to start with taking action. Israelis, Syrians and Jews put aside their differences – religious and political — to effectively support the 2.7 million Syrian refugees. Bennett feels this gives hope to all conflicts in need of resolution.

“When I first became aware of the magnitude of the Syrian crisis, I felt I had to act. It was visceral,” Bennett said. “But you know what? You can act, too. When you confront an overwhelming crisis, like Syria or Ukraine, in which you want to do some good, keep my formula in mind: find an entry point, identify a gap and find something doable with which to fill that gap.”