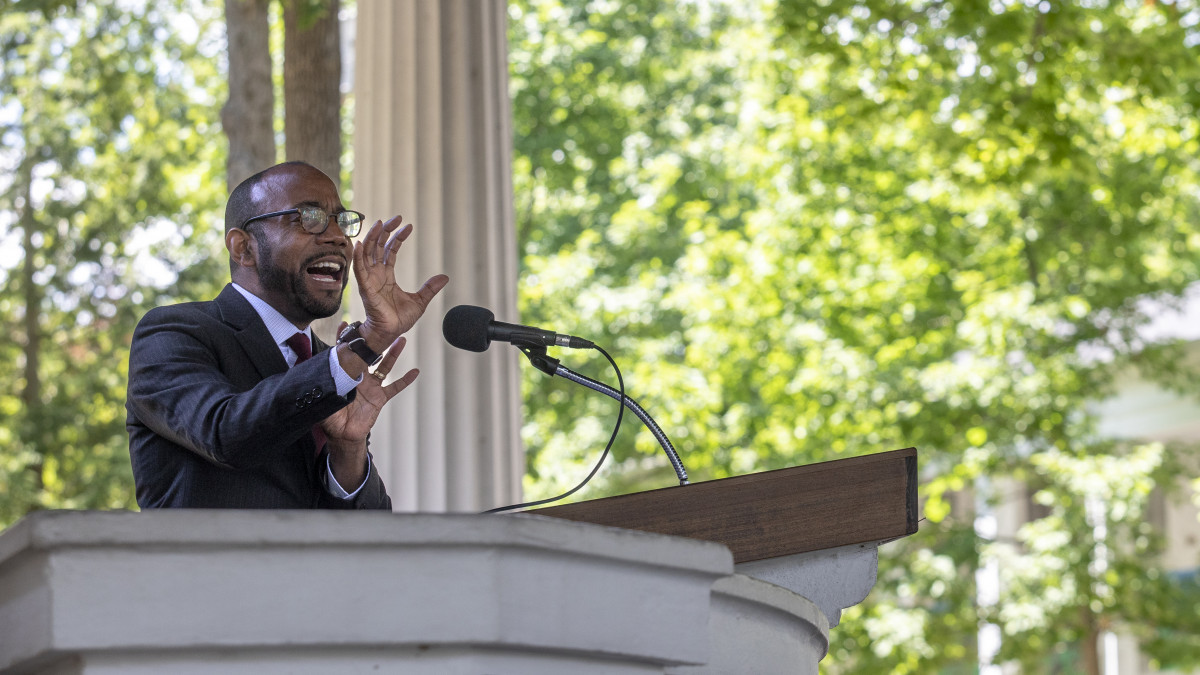 Human dignity has been repeatedly assaulted.

Cornell William Brooks visited Chautauqua to discuss the issues of dignity assault with his lecture, titled “The Moral Inflation of Human Dignity: Race, Repair and Rights.” His lecture on Thursday, July 14, was a continuation of Week Three’s Interfaith Lecture Series theme of “The Spirituality of Human Rights.”

Brooks is the former president and CEO of the NAACP, a professor at Harvard Kennedy School, civil rights attorney, ordained minister, orator and writer.

He also led a 1,000 mile-long justice walk from Selma, Alabama, to Washington in 2015, which lasted over 40 days, to demonstrate the urgency of voting rights and police reform.

This moment in time is particularly tumultuous and challenging, according to Brooks.

“It is a moment that reminds me of a moment back in 1940, when a member of the executive board of the NAACP and a First Lady of the United States, Eleanor Roosevelt, stood before the Democratic Convention and she declared, ‘This is no ordinary time,’ ” Brooks said.

The moral ugliness that surrounds the current state of the world impacts human dignity in a number of ways, Brooks said, but documents like the Universal Declaration of Human Rights, and Scripture, remind all people that they have been bestowed with a measure of dignity.

“We are a mere reflection of that which gave rise to this beautiful Earth … because we are made in God’s image,” he said. “We have value, we have worth, we have dignity. We can be esteemed and revered. … So no matter what happens, no matter the moral ugliness of the moment, we (can) see the sacred beauty within ourselves in this world.”

When human rights and dignity are violated, reparations are a way that people can rebuild their lives. Brooks told the Biblical story of one of the earliest examples of reparations: Zacchaeus and the sycamore tree. Zacchaeus was a tax collector who climbed up a sycamore tree.

Once atop the tree, Zacchaeus found a broadened perspective and clarity, and vowed to give half of his belongings to the poor and pay four times the amount of what he had cheated from anyone through his tax collections.

“This is an important metaphor in terms of those who are called to do social justice,” Brooks said. “Are there times when we need to ascend the sycamore tree, to glimpse the humanity of others?”

But even if one does not believe in Scripture, he said there cannot be a schism between those of differing faiths when tackling human dignity issues.

“In these social justice movements, you can’t really divide yourselves according to denomination or faith tradition, or whether or not you have a tradition at all, because the work is so hard,” Brooks said. “The work is so difficult,  the lives are so precious. We can’t afford those kinds of divisions.”

Still, Brooks respects the power that faith holds when people gather together for a common purpose.

Beginning to talk about the resilience of dignity, Brooks cited the Supreme Court Justice Clarence Thomas’ dissent in the marriage equality opinion.

“He made the argument that because dignity is immutable, it’s unchangeable, it can not be destroyed. It cannot be taken away. Therefore, to deny people of the same gender, the same sex, the right to marry is not a denial of dignity,” Brooks said. “Now, this was a matter of circular reasoning and tautology that just troubled my spirit as a lawyer and a minister. It is true that dignity is indestructible. We have it. We own it. But just because it’s indestructible does not mean it’s unaffected. Dignity can be diminished. Dignity can be denigrated.”

Dignity can be assaulted and damaged, Brooks believes. He defined dignity assault as the questioning of someone’s personhood, values and humanity.

Brooks shared a few examples of dignity assault, all of which were harmful incidents of prejudice that caused trauma, arrests and even death.

But Brooks argued that when dignity is assaulted, it can make one’s life more precious. He used the example of systematic racism and his own concern for his children’s safety.

“When (my sons) leave the house, my wife and I are not sure if they’re going to come back the same way they left,” Brooks said. “When my wife and I see our sons go out the door, we may value them a little more, perhaps differently from those who simply take for granted that when your children leave the house, they will most certainly come back.”

Brooks said that while the perceived value of dignity can fluctuate depending on how much pressure is placed on one’s humanity, its preciousness can also fluctuate.

Because, according to Biblical tradition, all humans are brothers and sisters, because all humans are interconnected, dignity attacks can impact even those who are not directly involved, Brooks said. One of Brooks’ students organized protests in her hometown of Highland Park, Illinois, the site of the recent July 4 shooting, after the earlier mass shootings in Buffalo, New York, and Uvalde, Texas.

With this, dignity assaults are never just physical; there is a greater subtlety, Brooks said. Referencing Critical Race Theory and book bans, Brooks argued that history and dignity are being banned and hidden.

Scientists have found that racial trauma is registered at the epigenetic level, meaning that this trauma is embedded in the genes. This shows how much dignity assault can not only affect people now, but also the next generation.

“If those in the fields of medicine tell us that racial trauma impacts your organs, from your brain to your heart, dramatically and dangerously increasing our destructive responses to stress, it simply means that literally, our lives are being endangered as a consequence of rabid and systemic racism,” Brooks said.

Drawing from Zacchaeus, Brooks discussed giving reparations to Black Americans whose ancestors were enslaved. Even though slavery ostensibly ended in 1863, its impacts live on.

Brooks listed three main reasons why people are opposed to reparations: Slavery was too long ago, it is too hard to provide reparations, and it is too expensive.

Slavery was not as long ago as it may seem, he said. With the Emancipation Proclamation symbolically ending slavery in 1863 and legally ending with the 13th Amendment in 1865, Black codes, Jim-Crow era laws that restricted the freedom of Black people, continued its legacy.

“As a consequence of the Black codes, we have the convict leasing system,” Brooks said. “Under slavery, there were enslaved.”

The convict leasing system, or what he called slavery under a different name, did not end until the beginning of World War II. Slave patrols were the beginning of police departments in the South. Jim Crow segregation is embedded with the prejudice learned from slavery. Brooks said slavery’s dignity assault is still interwoven into American society.

“We understand that back in the 1930s, our government sent out federal employees who crisscrossed the South and spoke to thousands of formerly enslaved people and captured their stories in terms of slave narratives,” Brooks said. “How long ago was slavery?”

As a child, Brooks slept under a quilt that was made from patches of his great-grandfather’s pants.

When people say reparations are too hard and too expensive to provide, Brooks points to how veterans, radiation victims and those who have lost their physical belongings to natural disasters are given compensation.

“Compensation is regular and routine for everybody but Black people,” Brooks said. “We’ve demonstrated a certain sophistication in identifying victims, ferreting out claims, designing programs to literally build and bring communities together. And so I simply say to you in this sacred space, is this not the moment for us to engage in a real racial reckoning?”

There are still inequities in school districts and housing. And when the GI Bill first came along, Brooks said Black people were denied housing and educational benefits.

Brooks left the audience with the lesser-known story of Harriet Tubman’s true resilience and work to free the enslaved.

Tubman’s story can still provide people with a lesson of resilience.

“Had Harriet Tubman compared the 700 people she delivered to freedom to the 4 million people who were enslaved, she might have given up,” Brooks said. “But what I want to share with you today is that our hope is not empirically demonstrated and morally chosen that we choose to do the right thing. … We choose to make our country better. We choose to scale the sycamore tree. We choose to recognize dignity.”