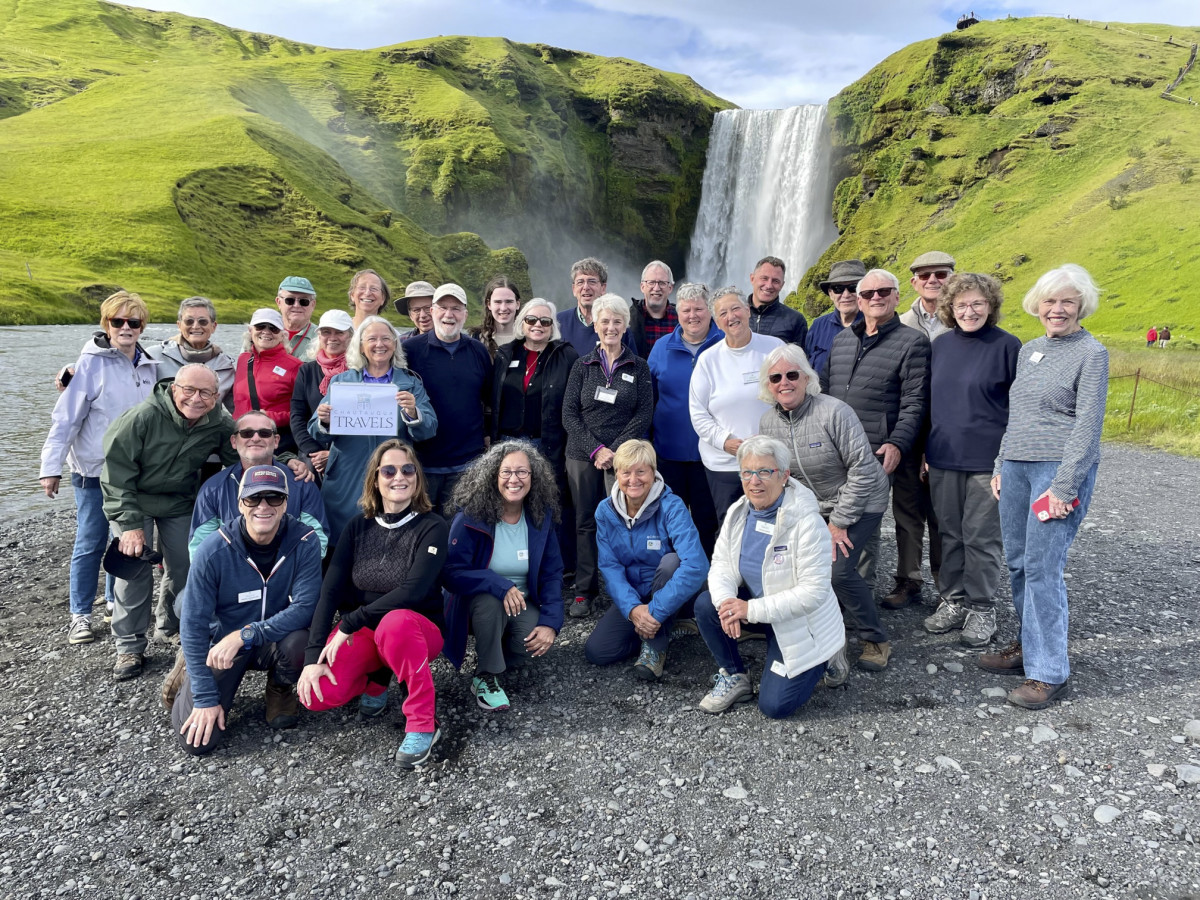 A quintessential Chautauqua summer promises a plethora of lectures to attend, performances to see and discussions to be had, all within the Institution’s gates. However, the 2022 season presented an off-grounds opportunity for climate change conversation — even beyond the borders of the United States, in the “Land of Fire and Ice.”

During Week Three, 26 adventurous Chautauquans ventured to Iceland with Climate Change Initiative Director Mark Wenzler for a week-long educational experience on climate change against the picturesque backdrop of the country’s capital, Reykjavík.

The Iceland trip was offered through Chautauqua Travels, a program that partners with Academic Travel Abroad to plan trips outside Chautauqua’s grounds that reflect the Institution’s themes and values.

“We launched the travel program as a way to have broader and deeper opportunities for conversation, to engage in issues of the day, just like we do in the summer,” said Senior Vice President and Chief Brand Officer Emily Morris. “This is part of our strategic plan to engage more deeply in mission-related activities beyond the summer assembly and beyond the grounds of Chautauqua.”

Travel through the Institution is nothing new; in the 1980s, Chautauqua facilitated trips to Russia and Latvia as part of a cultural exchange program at the tail end of the Cold War. The first climate-centric trip through Chautauqua  Travels was planned for 2020 to New Orleans, but due to COVID-19, the voyage was postponed to fall 2022. The Iceland trip became the pioneer journey for the launch of the travel program.

“When we first sat down, we said, ‘What kinds of things do we think can come to life in meaningful ways through travel?’ ” Morris said. “The topic of climate change was among those issues. We identified Iceland very early on in the process, with what the country is doing with geothermal energy in particular. Our Climate Change Director Mark Wenzler had traveled there previously, and it really aligned with our Climate Change Initiative and our mission to explore the best in human values, and to have conversations on the most important issues of the day.”

The Iceland Wenzler toured 20 years ago was much different than the one he experienced this past week; the sprawling city of Reykjavík used to house rural villages tucked away in the corners of the country’s capital. The landscape is not the only thing that has changed since his first visit. He usually travels alone, but this time, he was able to explore the country with his community.

“I’ve done a lot of traveling all over the world,” Wenzler said. “Usually, I go by myself. What was unique about this experience for me was the Chautauqua community, being part of this community, and really getting to know the people on the tour. That’s something I don’t often get a lot of, and the thing that I valued the most was being able to spend a week with these amazing people, and learn from them, and get to know their experiences.”

The expedition lasted seven days, during which the travelers were able to wade in the waters of Reykjavík’s famed Blue Lagoon, observe native puffins on the shores of the Westman Islands and enjoy the melodies of the country’s musical core in the Eyrarbakki Village.

Although the group visited the typical tourist attractions, the trip itself was not a sightseeing affair, but rather one with the purpose of informing Chautauquans about climate change while having boots on the ground in a country that is the world’s global leader in alternative energy.

“We saw many of the really important sites in southwestern Iceland that many people go there to see, like the national parks, the glaciers and waterfalls,” Wenzler said. “But they also got a deep level of engagement with what’s going on with Iceland in terms of its clean energy and how it’s addressing climate change. Those are things that made it uniquely a Chautauqua experience, rather than a tourist vacation. We got to learn about and go see a geothermal energy plant, learn about carbon capture and sequestration, and meet with Iceland’s most celebrated poet and novelist, Andri Snær Magnason, who’s written a beautiful book on climate change.”

The group toured the Hellisheiði geothermal power plant, one of the world’s largest geothermal energy facilities that is pioneering projects on harnessing carbon dioxide into rock. They also hiked the Sólheimajökull Glacier and saw firsthand how climate change has eroded the ice formations, causing them to shrink and retreat year by year.

In seeing the effects of climate change firsthand through immersive experiences, Wenzler said the group better understood how pervasive the threat of global warming is in ways it could not previously recognize. Educational experiences like this, Wenzler said, advance Chautauqua’s Climate Change Initiative.

“One of the things that we need to do with our climate change program is get our community to understand sort of the deep implications of climate change, and how it’s being addressed globally, and one way we can do that is to is to come to Chautauqua during the season and attend lectures,” Wenzler said. “But another way to do that is to actually get out and engage with the world, and even though only 26 people could have that experience on this trip, they’re all coming back to this utopian community with this information, with this knowledge, with this passion about what they learned. I think it does have a cascading effect from there.”

Both Morris and Wenzler hope that this trip will be the first of many that will continue to inspire Chautauquans to act on real-world issues in ways that go beyond the summer season and beyond Chautauqua itself.

“We have the same hope for trip patrons as we do for every patron who comes to Chautauqua during the summer assembly,” Morris said. “And that is to take the experiences, the relationships and the learning that occurs and leverage it for positive action in their lives and in their own communities. We like to say that we don’t create experiences for entertainment or learning sake alone; we want to inspire people to take positive action.”