For Stephine Hunt, part of what makes good writing exceptional is its structure. It isn’t flimsy or hard to follow; it’s concise, concrete and, above all, clear.

So when it comes to Erica Chenoweth’s book Civil Resistance: What Everyone Needs to Know, Hunt first noticed its unique structure.

“It’s posed in the form of a question-and-answer sequence,” said Hunt, the CLSC  Octagon manager. “It makes a really large collection of data and historical content much more approachable and readable.”

Chenoweth is the Frank Stanton Professor of the First Amendment at Harvard Kennedy School; they also direct the Nonviolent Action Lab at Harvard’s Carr Center for Human Rights Policy, where they study political violence and its alternatives. Civil Resistance, their most recent book, takes readers through what civil resistance is, how it works, and what its long-term impacts can be.

Chenoweth poses a set of questions at the back of the book that Hunt said are particularly thought-provoking.

At 3:30 p.m. Thursday, July 14, in the Hall of Philosophy, Chenoweth will discuss Civil Resistance, the Chautauqua Literary and Scientific Circle Week Three selection.

“I was introduced to Erica Chenoweth when I was taking a graduate seminar class on peace and conflict studies at Kent State University,” said Sony Ton-Aime, Michael I. Rudell Director of the Literary Arts. “A professor assigned an earlier work by Chenoweth, and I fell in love with their book and have been following their career and writing ever since.”

At that time, Ton-Aime said, Chenoweth was a recent hire at Harvard University.

“This is a selection that is very dear to my heart,” he said. “To quote a professor of mine at Kent State: ‘Erica Chenoweth is a superstar of peace and and conflict studies right now.’ ”

To have Chenoweth come to Chautauqua and give a lecture, Ton-Aime said, is an incredibly important thing for all Chautauquans.

“For them to come and talk with us about civil resistance, something that we desperately need, just as we’ve seen authoritarianism rising all over the world, it’s really important,” he said. “More than ever, the people need to find a way to reject authoritarianism.”

According to Ton-Aime, statistics in Civil Resistance show that nonviolent resistance and protest are more likely to bring about change, as opposed to violent methods.

“Right now, in this country, we need a book like this,” he said. “I’m so excited for everyone to read this book. While this is a very academic book, I have no doubt that everyone will deeply enjoy it.” 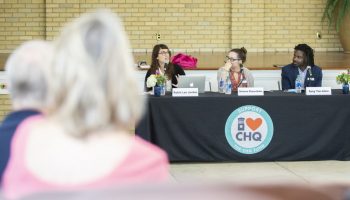