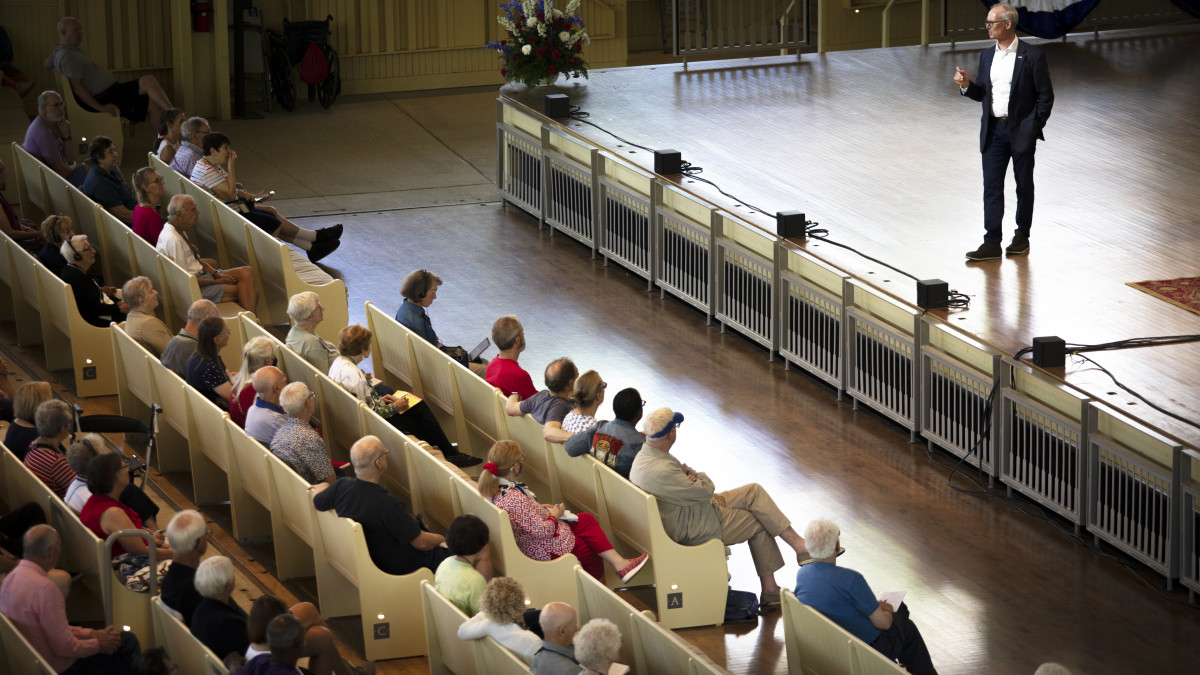 With a career of challenging the norms of his Republican-leaning state, Bob Inglis, former U.S. representative for South Carolina’s 4th congressional district, chose to engage his Chautauqua audience through political comedic relief to introduce his three-step plan to becoming a conservative concerned with climate change.

Inglis spoke at 10:45 a.m. Monday, July 4, in the Amphitheater to open Week Two of the Chautauqua Lecture Series, themed “The Wild: Reconnecting with Our Natural World,” with his lecture titled “Can Free Enterprise Solve Climate Change?”

Inglis, executive director of conservative climate change initiative republicEn.org, opened his lecture by asking audience members, if they were comfortable, to raise their hand when prompted to indicate if they were politically left-leaning, right-leaning or in the center. A majority of the audience was left-leaning, with about 10 right-leaning and a handful in the center.

All audience members, regardless of what party they identify with, kept their hands raised for each question. Inglis had a different experience during his congressional tenure.

“Conservatives aren’t interested in climate change,” Inglis said. “That’s the way it was for my first six years in Congress. I said that climate change was nonsense. I didn’t know anything about it, except that Al Gore was for it.”

Inglis represented the 4th District of South Carolina, which he said is probably one of the most conservative states in the country. After his initial six years, he went into commercial real estate law, then returned in 2004 to run again for the same seat.

“That was the year that the eldest of our five kids had just turned 18, so he’s voting for the first time,” Inglis said. “He came to me and said, ‘Dad, I’ll vote for you, but you’re going to clean up your act on the environment.’ His four sisters and his mother agreed.”

Listening to his family was step one of his three-step plan, Inglis joked, because “these people can change the locks on the doors to (my) house.”

He joined a science committee and, through a congressional delegation, visited Antarctica to see the ice core drillings at the South Pole — the second step of his plan.

His third step was going to the Great Barrier Reef to see coral bleaching.

Inglis said he experienced a “spiritual awakening” when snorkeling in the Great Barrier Reef with his friend Scott.

“So that’s how this conservative from South Carolina got involved in climate. It was a three-step metamorphosis,” Inglis said.

Inglis then went home to South Carolina to work on his newfound climate change initiative, focusing on carbon removal.

“I came home and introduced the Raise Wages, Cut Carbon Act of 2009,” Inglis said. “Note to self: Do not introduce carbon tax in the midst of a great recession in the reddest state in the nation. It did not go well.”

His stats as “an actual conservative” are a 93% American Conservative Union rating, 100% from the Christian Coalition, 100% from National Right to Life, an “A” with the National Rifle Association, a zero with the liberal group Americans for Democratic Action and a 23% with the labor union AFL-CIO — which surprised Inglis, as he was hoping for a 0%.

Inglis’ roots in the Republican Party, paired with his passion for climate change, motivated him to start republicEN.org.

“We even spell (republicEN) differently,” Inglis said. “It’s EN for energy, entrepreneurship (and) the environment.”

Inglis then explained the second part of his lecture: policy options available in the United States and worldwide.

“We make it sound like the solutions are really complicated; they’re really not,” Inglis said. “They fall into three categories. You can regulate emissions. You can incentivize clean energy, or you can price in (the) negative effects of burning fossil fuels.”

Regulating emissions was a good idea until West Virginia v. Environmental Protection Agency this year, Inglis said. The Supreme Court found that the EPA “cannot seek to change the (carbon) generation capacity of the United States.”

Doing so exceeded the EPA’s authority. Inglis said he wants to imagine what could happen if the United States could regulate emissions, but the cons could outweigh the pros.

“The risk of this regulatory approach, in all humility, even if you’re left of center, is you could go downhill on solving climate change,” Inglis said.

Incentivizing clean energy, such as expanded credits for wind and solar power, is another concept Inglis has considered, but it has a similar outcome to regulating emissions.

“It’s got this same pitfall,” Inglis said. “Which is: ‘How do you incentivize Chinese corporations or individuals to do things to the American tax code?’ Answer — you can’t. So you might end up in the same spot.”

There’s a relatively small market for clean energy equipment — about 20-30,000 companies. Inglis worries about this industry becoming a mass market. If a lot of people end up wanting clean energy equipment, the price will remain stagnant, making it less accessible. This would reverse the effect that Inglis said would help cut carbon prices.

Inglis said the next option wouldn’t be to cut taxes somewhere else, but to divvy up the money from carbon tax to distribute among citizens so the government doesn’t get too much. The only issue with this, he said, is that applying taxes elsewhere would cause an uptick in the international market.

The problem is reflected in the cost of products, Inglis said. Increasing the prices of electricity, gasoline and propane doesn’t make people want to vote for this sort of change.

“Make sure you start with the good news, which is ‘No, we’re not going to cut your taxes somewhere else,’ or, ‘We’re going to divert the money back to you,’ ” Inglis said. “ ‘Yes, your propane is going to cost you more. It’s going to cost the actual cost of burning that stuff, but you’re going to have money in your pocket.’ ”

Ingis reflected on what  legislation has done, which is mainly correct past legislation. He said, at the end of the day, people on the left and right need to come together and realize they are all hoping for the same climate change endgame.

“I think that what was being preached earlier from this stage is the idea of grace and forgiveness,” Inglis said. “It’s incumbent upon the left to be that way toward the right in accepting people into this conversation.” 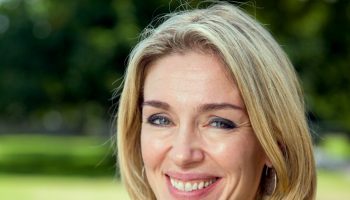