Lee Drutman’s closing lecture of the Week Five Chautauqua Lecture Series theme on “The Vote and Democracy” was titled “Breaking the Two-Party Doom Loop.” And so he offered the audience “a little doom, a little gloom,” but “mostly a note of hope and a sense of possibility, because I do think our democracy can renew and innovate.”

In fact, America could be on the verge of that renewal and innovation, precisely because it’s in a doom-and-gloom moment, Drutman said. Drutman is a political scientist and advocate for both ranked-choice voting in the United States, and a multi-party system: the idea that the country needs strong third, fourth, or even fifth parties on the ballots. He’s a senior fellow in the Political Reform program at New America, and the author of Breaking the Two-Party Doom Loop: The Case for Multi-Party Democracy in America.

He spoke Friday, July 29, in the Amphitheater, sharing his “big idea” for representative democracy. Within his big idea is four takeaways that he shared with Chautauqua.

Second, he wanted to convince his audience that, among proposed solutions, the one with the highest chance of success is this move to a proportional, multi-party democracy. And it doesn’t require a constitutional amendment — “just ordinary legislation.”

“Third, I want to convince you that reform is indeed possible, and that we are in a moment in which big things are possible,” Drutman said.

Finally, he wanted to hammer home that this reform isn’t just possible, but urgent and necessary.

“American democracy has had a long history, and it’s a history of ups and downs,” he said. “… We’ve done this before, and in each era, there’s a pattern of deep dissatisfaction with the unfairness and corruption of existing rules that gave way to periods of reinvention and reinvigoration. … The fundamental bargain of American democracy adapted to changing societal values and moral expectations about how modern democracy ought to live up to its core values.”

Eras of reform — the Revolutionary War, the expansion of the franchise in the 1830s, the progressive era of the early 1900s, to the Voting Rights Act and Civil Rights Movement — happen about every 60 years. So, Drutman said, we’re right on schedule in 2022.

“But the question is, can we do it again?” he asked. “And can we learn from the mistakes of the past, or are we doomed?”

Drutman took the Amp back to the last era of reinvention in America — the 1960s.

“Most politics was local,” he said. “National parties were more like these loose labels whose main function was really to come together every four years to say who should run for president. … There’s a famous quip from President Eisenhower in 1950: ‘There’s not one Republican Party. There’s 48 Republican Parties.’ ”

At the time, there were 48 states. The same quip could apply to the Democratic Party then, too. The Vietnam War and the Civil Rights Movement shifted political relationships, and for a moment in the 1970s, Drutman said, people thought the era of partisan politics was over.

But “beneath the surface, what was happening was that the parties were realigning,” he said. “… And the focus of Washington was shifting. Washington was becoming the arbiter of cultural values as these issues really came to the center of politics, … and parties became more nationalized.”

Citizens were no longer voting for candidates, but for the parties. As local media declined in the 1990s, more attention focused on national politics, and elections — even local elections — became referendums on national issues.

But as parties drew clearer lines on social and cultural issues, those liberal Republicans and conservative Democrats began to disappear. Geography has something to do with it, tied to diversity, as America becomes more multicultural and multiethnic, Drutman said. It became easier to see the other party and “distant and different, and things that are distant and different become more scary, more threatening. The more the other side becomes a threat, the worse it would be if they won.”

“Yet for all the fighting and the fear that the other side is going to take over and do some horrible thing, the other side never seems to amass quite enough power to actually do all that much for all that long,” Drutman said. “Instead, what we’ve had over the last 30 years is this constant swing, back and forth. … Stakes keep rising. Scorched-earth policy, scorched-earth rhetoric keeps rising. No compromises. Gridlock.”

This, he said, is the two-party doom loop.

“Yes, it’s true — we’ve had Democrats and Republicans for 160 years now, but something is fundamentally different today,” Drutman said. For one, politics are more nationalized than ever, and the two prominent parties are “completely, geographically, non-overlapping parties.”

Americans’ political conflicts have been flattened, with Democrats and Republicans “separated by geography, culture, identity and, most dangerous of all, different facts. Just fundamentally different realities.”

The Founding Fathers knew their history, Drutman said, and they knew that the few democracies and republics that had existed before America had fallen into civil wars.

“They thought they had worked out this solution, which was this complex system of shared powers and checks and balances,” he said. “… Madison lays out in Federalist Paper No. 10 this idea that coalitions should be fluid. There’s going to be factions. … But you can prevent tyranny and dominance and this binary by trying to make it harder for the factions to be consistent.”

The alternative to politics without parties, however, is “incoherent chaos,” he said, and ultimately a descent into authoritarianism.

Having laid out the problem, he moved to the solution — a multi-party democracy. There are other counterarguments and ideas, Drutman noted, but his proposition is to change the way Americans vote, getting rid of single-member districts which limit choices to the two parties.

He proposed proportional, multi-member districts, with up to five elected representatives per district, allocated proportionally. Around the world, in most democratic countries, “it’s a norm, frankly. … The U.S. is really the only large democracy that has two political parties.”

Drutman is not proposing what Israel does, for example, with the whole country as one electoral district. But there’s a sweet spot, of those five-member districts, that he thinks would pair nicely with increasing the size of the House of Representatives.

This system could do more than just solve the binary, zero-sum game the U.S. finds itself in; it could also alleviate the power of gerrymandering, which he said could mean “every vote matters equally.” And with more parties and more options, he said, voter turnout is higher among those who don’t align with either of the two major parties.

“There’s some good, decent people who would like to have a party that is conservative, but not anti-democracy,” Drutman said. “But without a multi-party system, where is that party going to come from? And that party is essential to the future of our democracy.”

Change happens slowly, and then all at once; he reminded the audience that many ideas have been fringe ideas in the history of American politics, and now is “a moment of transformation.”

“We’ve got to figure out how to build something new, that takes the best principles of American democracy and updates them for our modern era,” Drutman said. “Now, obviously changing how we vote is a big idea. And it’s really challenging to build new parties in our political system. … We’ve had a history of third parties that have failed because it’s really hard in a single-winner district (and) two-party system.”

There are promising steps being taken in the short-term, however. New York State has used fusion balloting, for example, allowing multiple ballot lines to endorse the same candidate.

“History doesn’t move in straight lines. History moves in waves. And the moments in which everybody’s feeling dark and pessimistic are the moments in which big ideas can take off,” Drutman said. “ … In these moments, somebody has to have a plan. Somebody has to have a vision. This is why it’s so important to have a vision for the future — any destruction to the status quo is going to feel risky, but whether we like it or not, it’s happening. It’s being done; it’s just a question of how, by whom, and with what goals in mind?”

That two-party doom loop he mentioned at the outset of his lecture “isn’t going to break on its own.”

“Democracy is a fragile system. … But I am seeing some energy that says we need bigger, more transformative change out there,” Drutman said. “The status quo is broken and we need to mobilize and organize. … Most progress always come when enough of us look at the world as it is and say, ‘enough already.’ ”

Americans are not “sleepwalkers fated for disaster,” he noted, because their political pessimism has done something important.

“It’s awakened us to where we might be headed if we don’t make big changes,” he said. “And the good news is that we’re here. We’re having this conversation. To me, this is a cause for optimism, and it’s a moment for leadership to take us out of the ravine. So enough with the pessimism. Let’s turn this mess around.” 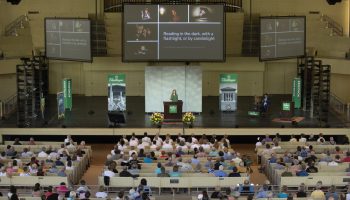 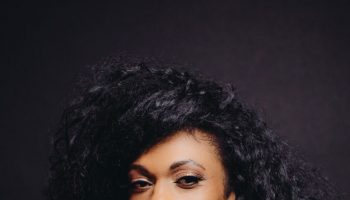