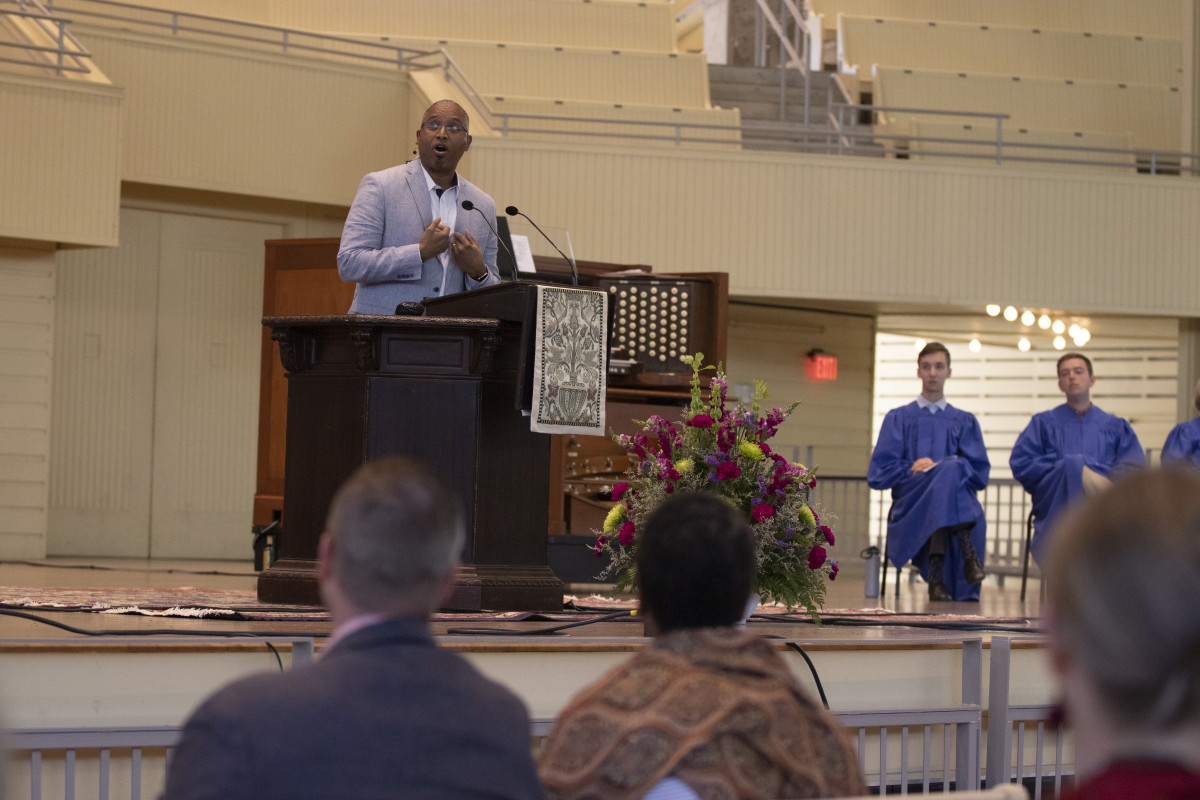 “I woke up with a song about the moon in my mind. Let’s have Brother Sun and Sister Moon talk with each other today,” said the Rev. Michael-Ray Mathews at the 9:15 a.m. Monday, July 11, morning ecumenical worship service in the Amphitheater.

His sermon title was “Facing the Rising Sun,” and the Scripture text was Psalm 25:1-10.

Mathews asked the congregation to close their eyes and listen to the Psalm again as he read it. He told them to listen for the word or words that stood out and to think about the feelings or images that word elicited. After a time of silence, he invited people to share their words and feelings with a neighbor. This type of reflection on Scripture is called Lectio Divina.

Again opening his sermon with a song, Mathews sang, “There is some kiss we want with our whole lives, the touch of the spirit on the body. … Darling, open the window and beg the moon to press his face against mine. Breathe into me. Close the language door, open the love window. The moon won’t use the door, only the window.”

“Hope has two beautiful daughters. Their names are anger and courage; anger at the way things are, and courage is to see that they do not remain as they are,” is a quote attributed to St. Augustine of Hippo.

When Mathews began his work with Faith in Action, he was still living into his role of helping clergy find handles for the work the group had embraced as people from diverse faith and social communities.

“Hope was the handle that provided the theological and ethical framework,” he said. “We created a space to talk about anger and courage, to discuss the role that anger plays in my life and for others to confess their own anger. Anger is a regular human emotion.”

“Anger holds vital information and provides clarity for our grief and gives language for what has been. Anger clarifies what we are fighting for, and coupled with courage, they are the tools for change,” he said.

On a first reading, “Lift Every Voice and Sing,” seems all about hope, about an upward trajectory toward justice where liberation was flourishing.

“I was taught that the journey of African Americans was moving from being an enslaved people to Lincoln freeing the slaves to Dr. King fighting for civil rights,” Mathews said. “I was told, ‘Go, young Michael, and fulfill that dream.’ The narrative of progress was foundational for me, that we were still heading toward the promised land. Don’t get bogged down in the disparities, it is all going to get better.”

People told Mathews not to be discouraged that the war on drugs was more a war on Black people, that even though so many Black people were incarcerated, at least it was not Jim Crow. Hope and progress lingered, and people organized progress toward material well-being.

“Then Trayvon was killed and his murderer walked free. My brother died of suicide, worn out from drugs and despair. Michael Brown died in Ferguson and as I was chanting that ‘Black Lives Matter,’ I began to wonder about hope and progress,” he said.

Mathews continued, “I questioned whether ‘Lift Every Voice and Sing’ told the truth of our ongoing suffering. Does the present really bring us hope? What would the Johnsons (creators of the song) think about our ‘post-racial’ United States?”

The arc toward justice keeps getting longer. Studying the history of the song provided Mathews with a reality check.

“I had to take history more seriously. The history is more dynamic than I thought. It is a winding road, not an upward trajectory. I came to see that the song takes our hopelessness seriously,” Mathews said.

The song was not written in 1863 when the Emancipation Proclamation was issued, or in 1865 when the enslaved people of Texas finally heard about their emancipation, or during the brief time of Reconstruction.

According to author Imani Perry, “Lift Every Voice and Sing,” was written at one of the lowest points, the nadir, in the Black experience. Eyes that had been lifted heavenward in hope shifted down under Jim Crow. People mourned their dashed dreams and had to dream anew as the “pigmentocracy” took hold.

“Lift Every Voice and Sing,” was written from the depths of pigmentocracy. It includes praise and lament, joy and pain.

“It is a song of hope that takes our hopelessness seriously,” Mathews said. “The nadir of our history was also a season of blossoming with new institutions, newspapers and organizations for advancement. ‘Lift Every Voice and Sing’ faces the sun from the depths of hell.”

The song is a declaration of faith and a cry for help. It speaks of solidarity across time in the face of the treacherous pigmentocracy. It names the sins of the past and is a petition for forgiveness. It provides guidance in the face of hopelessness.

“I came to have a more realistic and complicated understanding of the song. Afro-Pessimism and Afro-Futurism kissed. I have a grown-up hope with anger and courage as its companions,” Mathews said.

The Rev. Alvin Herring, executive director of Faith in Action, quoted his mother, saying, “If you show up and look like hope, people will hand you their hopelessness.”

“My prayer for you is that you will show up looking like hope, you will look like hope and be kissed by Brother Sun and Sister Moon,” Mathews said. “We will find our interconnectedness despite a history that tries to drive us apart. And with the Psalmist and the Johnsons, ‘Let us march on, till victory is won.’ ”

The Rev. Natalie Hanson, interim senior pastor at Chautauqua, presided. The Rev. John Morgan, senior pastor of Williamsburg Presbyterian Church, Williamsburg, Virginia, read the Scripture. The prelude was “Dawn” by Cyril Jenkins, played by Joshua Stafford, director of sacred music and holder of the Jared Jacobsen Chair for the Organist. For the anthem, the Motet Choir sang “Sun of Righteousness,” music by James E. Clemens and words by J. Michael Thompson. The postlude, played by Stafford, was “Carillon,” from 24 pièces en style libre by Louis Vierne. The Jackson-Carnahan Memorial Chaplaincy and the John William Tyrrell Endowment for Religion provide support for this week’s services.

Back for an encore: Winning YPP performances return to Smith Wilkes