David Lamfrom, Terry Tempest Williams discuss how to connect with nature, each other 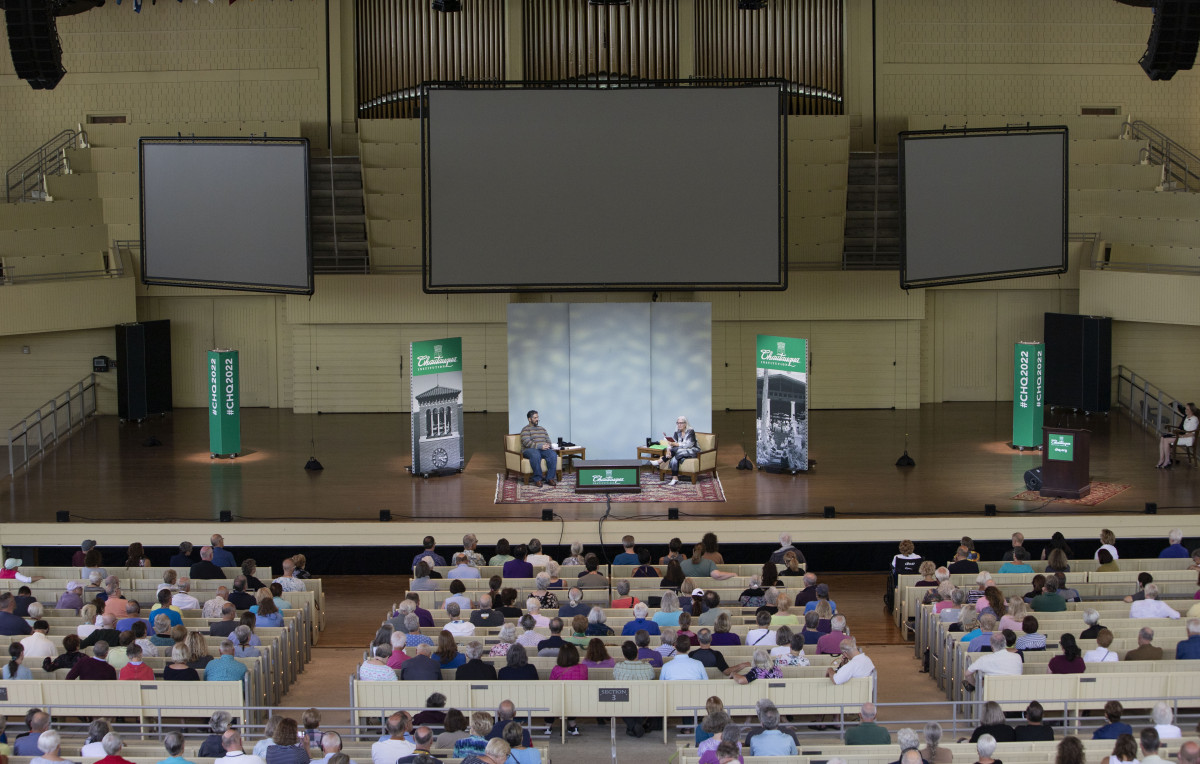 In two chairs onstage, with a box of tissues between them, David Lamfrom and Terry Tempest Williams held what they want all of the United States to have: a conversation.

At 10:45 a.m. Thursday, July 7, in the Amphitheater, as part of the Chautauqua Lecture Series theme of “The Wild: Reconnecting with Our Natural World,” naturalist and writer Williams and Lamfrom, the vice president of regional programs for the National Parks Conservation Association, reflected on the idea that honest conversation, in which each party is vulnerable, can heal and build bridges.

Lamfrom began the presentation with a land acknowledgement.

“I want to acknowledge that we are in both the ancestral and the current home of the Seneca Nation and of the Iroquois Confederacy, but I also just want to say that sometimes land acknowledgements can be performative,” Lamfrom said. “I just want to say that I’m offering this to bring forward respect, dignity, and with the theme of reconnection, that we all think about what that might mean, what it might mean to learn a little bit more about that history, about how that history has impacted our present, and what the future could look like.”

Lamfrom clarified that he was not bringing this to people’s attention to cause guilt and shame, but to encourage people — “to have the grace to hold that with curiosity, with care, with eagerness” — to be open about the world and the ensuing conversation.

Both Lamfrom and Williams have a deep connection to the desert. This connection formed before Lamfrom ever met Williams.

Through her work as a naturalist and writer, Williams has experienced great success. As a naturalist, she has been awarded the Sierra Club John Muir Award and the National Wildlife Federation’s Conservation Award for Special Achievement. As a writer, she received a Hemingway Foundation Literary Grant, and is currently a writer-in-residence at the Harvard Divinity School. She has consistently combined her scientific literacy with her talents as a writer; this has inspired Lamfrom.

“When I moved to the California desert … and I was trying to figure out what the hell I was doing, I would read her books and her poetry, and it would center me and help me connect,” Lamfrom said.

He acknowledged that Williams had no idea about his move to the California desert and how he would “fall desperately in love with it and that it would become the greatest work, struggle, and fight of my life.”

He then thanked Williams for inspiring him and for working toward a better future.

“I loved today at breakfast, how you said our opening conversation is ‘No more,’ because we have lost so much already, and when we talk about compromise, we’ve already compromised too much,” Williams told Lamfrom. “And so you’re here with two individuals that are not moderate. We’ve been seen as extremists, but we are called extremist in our own home ground. It’s only because of our own extreme love.”

With that in mind, Lamfrom introduced his first question , asking Williams what words she wants people to associate with her. She responded with a story about having her father send her pages of his memoir. When he completed it — handwritten on legal pad paper — she typed up the memoir and presented it to him.

He said to her, “Terry, I used to think of you as my loving daughter. I don’t see you that way anymore.”

Williams shared this anecdote to exemplify her duality, saying that she is a poet and a naturalist, but she is also “a pain in the ass” to her dad.

“I think with a name like Tempest, you have a healthy disturbance that swirls around you,” Williams said.

The night before, Williams spent the evening on the patio with her friends. The twilight of the evening enshrouded them. In the darkness, Williams said to herself, “Maybe this is where we all need to be speaking from.”

Lamfrom asked what was on Williams’ heart today, as they sat on the stage. Williams encouraged the crowd to ask themselves that question: What is heavy on their heart?

For Williams, it is gun violence, the overturning of Roe v. Wade, the Jan. 6 hearings, and, on a more intimate level, the question of “how we speak to one another around our own dinner tables.”

Williams’ uncle Richard Tempest, who is a former Utah state senator, does not share her political views.

After the 2020 presidential election, he said to her over the phone, “I don’t want to talk to you.”

This hardly threw Williams, who admitted that her family is very blunt.

They both said they wouldn’t change their perspectives: on abortion, guns, gay marriage or climate change, but Williams told him they had to find a bridge.

Williams said that he told her, “ ‘If you’re serious about having a conversation with me and the people that I relate to … then go back to where you began, with beauty. Go to the source, and then I can open your books and be moved.’ He said, ‘Depoliticize your language.’ And I said, ‘Rich, I’ll try. On the page I will try. And what will you do?’ And he said, ‘I’ll keep talking to you.’ ”

Williams compared our fears about the world around us to rattlesnakes, a creature that Lamfrom is familiar with. Rattlesnakes’ prey are also often very dangerous creatures. To protect themselves while they eat, rattlesnakes bite their prey to release venom, but wait for the prey to trail off elsewhere and die before they come to consume it.

“If a rattlesnake bites somebody or has to use its venom defensively, that might be the difference between life or death (for the rattlesnake), so the last thing a rattlesnake wants to do is bite somebody,” Lamfrom said. “But it does what it has to do to survive in this world.”

Lamfrom and Williams agreed there is a mythology around rattlesnakes, which creates fear. Ultimately, myths of any sort are the cause of fear in our lives.

“What are we afraid of? The myths we create around each other,” Williams said. “As you said to me today, the rattlesnake is a meditative creature, a gentle creature that knows patience, and it perfectly adapted through time.”

The myth that rattlesnakes are aggressive and dangerous and something that consumes our thoughts parallels the myths people have of those different from them — particularly people with different political beliefs.

Myths and fear make it impossible to grieve, which Williams believes we need to do now more than ever.

“If we don’t collectively grieve, then I believe that it comes out sideways, which is, I think, in many ways the violence that we’re experiencing,” she said. “Because what I’ve learned in our family, and like many families who have had a lot of death, is that if we’re present with that grief, if we’re present in the dying, then grief becomes the sibling of love. And we don’t need to fear it as much as embrace it.”

Lamfrom agreed, and suggested that perhaps this suppression is part of America’s history and culture.

“It connects to our values as a country. We are tough. We can make it. We can trudge through,” Lamfrom said. “But what happens to the grief that we have repressed? And does that not allow us to express the full range of being a person? Do we then not get to ask for what we really need? And in that, do we then just pretend that things are a way that they’re not?”

Lamfrom said that when we are not able to grieve losses and instead ignore that anything was lost, we bar ourselves from “knowledge, experience, power, growth, health, humility, joy.”

Lamfrom’s statement reminded Williams of a man she knows, Willie Grayeyes, who took the state of Utah and San Juan County to court for gerrymandering.

“He won the case,” Williams said. “In one of the largest counties of the United States, they found justice in a Navajo majority, a Denay majority.”

After this victory, Grayeyes ran for county commissioner, but Williams’ extended family took Grayeyes to court, claiming he was not a resident and, therefore, could not run.

When asked by the judge to provide proof of residency, Willie Grayeyes explained that he is a resident of Utah because “my umbilical cord is buried here.”

“You can imagine the guffaws, the laughter,” Williams said. But the judge ruled that Grayeyes was a resident, saying that he was “not only a resident of the State of Utah; he understands what dwelling in a place means, that we can only hope to emulate.”

To end the lecture, Williams read an excerpt from her obituary for the land, titled, “A Burning Testament.” A good friend of hers, who was covering the wildfires in Los Angeles, asked her to write this essay because she was overwhelmed with the destruction around her.

“Let this be a humble tribute, an exaltation, an homage, an open-hearted unity to all we are losing to fire, to floods, to hurricanes, and tornados, and the invisible virus that has called us all home and brought us to our knees,” Williams read. “May we remember this and raise a fist full of ash to all the lives lost, that it holds. Grief is love. How can we hold this grief without holding each other? … I will mark my heart with an X made of ash that says the power to restore life resides here. The future of our species will be decided here, not by facts, but by love and loss. Hand on my heart, I pledge allegiance to the only home I’ll ever know.”