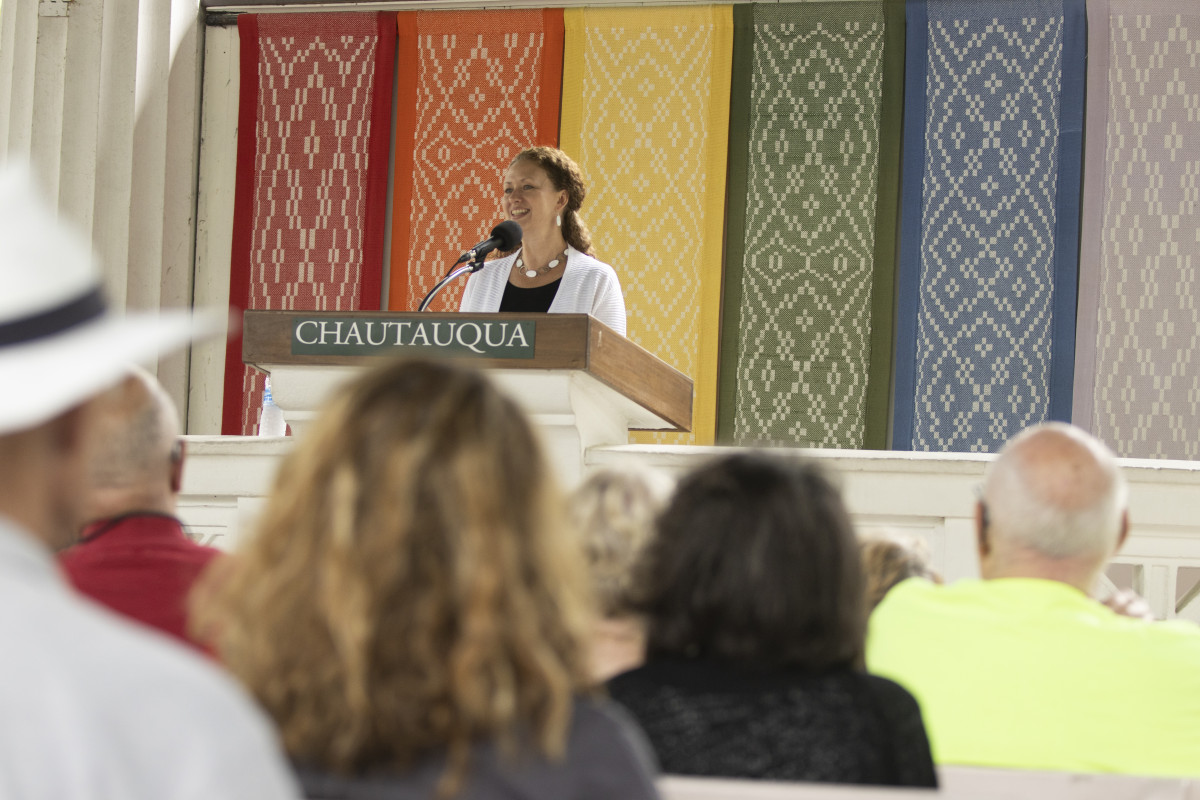 The golden rule: “Treat others the way you would like to be treated.”

Many people are taught this core principle from an early age, and it is reiterated throughout the duration of their lives. Yet, many experience the exact opposite, both through microaggressions and interpersonal relationships, even on a global, systematic scale.

Layli Miller-Muro has been on a mission to reform inequality issues through her work as a lawyer and the founder and former chief executive officer of Tahirih Justice Center.

Miller-Muro has worked for over 20 years with Tahirih, a nonprofit organization that seeks to protect women, girls and other survivors from gender-based human rights abuses.

Under Miller-Muro’s leadership, Tahirih has served over 30,000 women and girls. The organization also grew from a staff of six to over 100 with the expansion of offices in San Francisco, Houston, Atlanta and Baltimore.

Through Miller-Muro’s work, she has learned that most people, particularly people of different faiths, share the same core beliefs of human equality and dignity.

The inability to set the golden rule into action has contributed to the dehumanization of others, which has resulted in widespread racism, sexism and wealth inequalities across the globe.

“We’re not treating people as we would want to be treated, and the consequences are life threatening,” Miller-Muro said. “The consequences of this are deadly, and people are dying all over the world.”

While Miller-Muro’s focus is on women’s rights, she recognizes the intersectionality of all human rights issues. She said that it is impossible to discuss women’s rights without talking about poverty, racism, homophobia and economic disparities.

Miller provided a few statistics to portray the gender-based issues women across the globe face during their life. She said one in five American women will be raped; one out of every three women globally have experienced violence; violence against women has increased 13% since the COVID-19 pandemic; and hate crimes in the United States, according to the FBI, have increased by 44% in the last two years alone.

As someone who practices the Bahá’í Faith, Miller-Muro believes religions have more in common than meets the eye. The golden rule is threaded throughout various sacred texts across most major religions, yet people still fail to truly treat others equally.

“I think that (we do not treat others as equals) because of two reasons. … It’s because we don’t believe it. We don’t really think (everyone is equal), we don’t really believe it’s true,” Miller-Muro said. “The second reason is, let’s say we really believe it, we don’t know how to interact in ways that would be reflective of truly treating each other as we would want to be treated.”

Some, however, are overtly racist, homophobic, sexist or xenophobic.

“We’d like to think they don’t exist, but they exist in large numbers,” Miller-Muro said. “It has significant and profound impacts, so we can’t ignore that.”

While some people use the disparities they have with others to promote a feeling of superiority, others try to subdue their subconscious prejudices against others.

Western culture values competition and credentials, as historically, it is a system defined by male whiteness. But someone having a doctorate does not make them smarter or better than anyone else, or more worthy of human rights, Miller-Muro said.

Each individual has strengths and weaknesses that can be complemented by another person’s lived experiences.

“Whether we believe in the superiority of a person, particularly ourselves overtly, or whether we believe it subvertly, we have to look deep in order to see how we’re showing up in the world,” Miller-Muro said. “This inhibits us from treating others as we would want to be treated. It’s when we’re able to otherize, label, demonize and see people as different that our Neanderthal brain allows us to treat (others) less well.”

While some truly believe everyone is created equal and are actively fighting disparities in their subconscious, many do not know how to actualize that belief.

“We engage in charity, we volunteer, we sincerely want to help others. But sometimes it doesn’t work; sometimes it causes more harm,” Miller-Muro said. “And sometimes that’s because we fall from allyship into saviorship. … Saviorship does treat people less-than, and it doesn’t help us ultimately with our objective.”

Tahirih advocates for survivors’ voices to ensure they receive the aid necessary to heal and excel. Miller-Muro uses a method she calls “seeding truth,” or giving survivors the opportunity to have a say in what aid they receive.

“This is very hard for people, particularly, who have privilege — people who are used to being smart, who may have money, who are used to believing that we are good at what we do, and so, therefore, we should decide,” she said. “But if we really want to treat others as we would want to be treated, we have to not be the ones (involved) in the decision-making model about what that looks like.”

Miller-Muro points to both structural and personal reasons that influence interpersonal relationships. First focusing on structural issues, Miller-Muro said the Constitution and the U.S. legal system were built on inequality.

“I’m a lawyer. So I understand there’s some benefit, but it’s only because of the system that we have,” she said. “Our whole justice system is premised on winning, not truth. It’s based on victory, not justice.”

Beyond this, Miller-Muro passionately believes that lawyers should not have to represent refugees and asylum seekers who are escaping persecution, as it is not a crime. Yet more often than not, asylum seekers find themselves in jail awaiting trial while simultaneously trying to rebuild their life.

Foundational flaws with implementing gender-based asylum legislation, or any legislation, also impact how marginalized groups are treated; their very existence is dehumanized.

Switching to focus on personal reasons, Miller-Muro discussed how people need to transform how they view and treat others, starting with the heart. They must embrace oneness.

To recognize the commonality that lies within everyone, Miller-Muro provided three pieces of advice: be uncomfortable on purpose, be proximate, and be spiritually guided.

Miller-Muro said embracing uncomfortability is imperative for growth. She likened it to going to the gym — straining muscles, lifting heavy weights, experiencing microtears — to build muscle and become strong.

“(Uncomfortability) is the law of nature. This is the law of growth. … We must be uncomfortable,” Miller-Muro said. “We’re surrounded by messages that give us really dangerous permission to be way too comfortable. But it’s the wrong message, and it’s killing us.”

When addressing proximity to others, Miller-Muro turned to Bryan Stevenson’s work as a lawyer, social justice activist and the founder and executive director of the Equal Justice Initiative.

“(Stevenson) talks about the importance of being proximate, being close, being embedded and being with,” she said. “Having close proximity to people not like us and to issues of concern are very important.”

Miller-Muro offered several ways people can become proximate to others.

“It is important to understand what the experience of someone else is like. Maybe that’s reading books. It might be watching documentaries,” she said. “But I hope more, it’s having (interactions with) people who love deeply, who experience pain, who experience other issues — authentic friendships with individuals who have experienced oppression in ways that maybe you would not.”

Miller-Muro said it is human nature to seek out relationships with people who’ve had similar experiences; it is also common for people to be drawn to others who look like them. But she said even though we can understand why this happens, the urge must be resisted.

Even though religion has been known to cause division, Miller-Muro said connecting to Scripture can be a transformative experience; religion has an opportunity to unite and transform society through motivating a profound change in heart.

Miller-Muro recognizes that this work is difficult, taxing and uncomfortable. Despite the difficulties and the current tumultuous state of the world, Miller-Muro has hope for the future.

“I believe deeply that we’re in the right direction,” she said. “And I know, particularly in recent years, it can really feel like we’re not. It can feel really depressing, and it can feel like we’re going backwards. I don’t deny the areas in which we are. But … I see this as a part of the cycle.”

Comparing the current state of the world to rebirth, Miller-Muro posed the idea that humanity may be on the brink of a new and vital realization. But first, she said we must get through the anguish and pain of birth.

“You know that the more intense (the pain and contractions are) and the more frequent it becomes, the more cause there is to celebrate because it is the birth of something wonderful,” Miller-Muro said. “Things are hard. It is painful. It is getting worse, I think. I think it will become more intense. It will become more excruciating. I don’t believe we’ve seen the end of the bottom. … (If we) get through this process of birth, I am confident it will birth something wonderful.”

An ensemble within an ensemble: CTC concludes run of ‘Indecent’