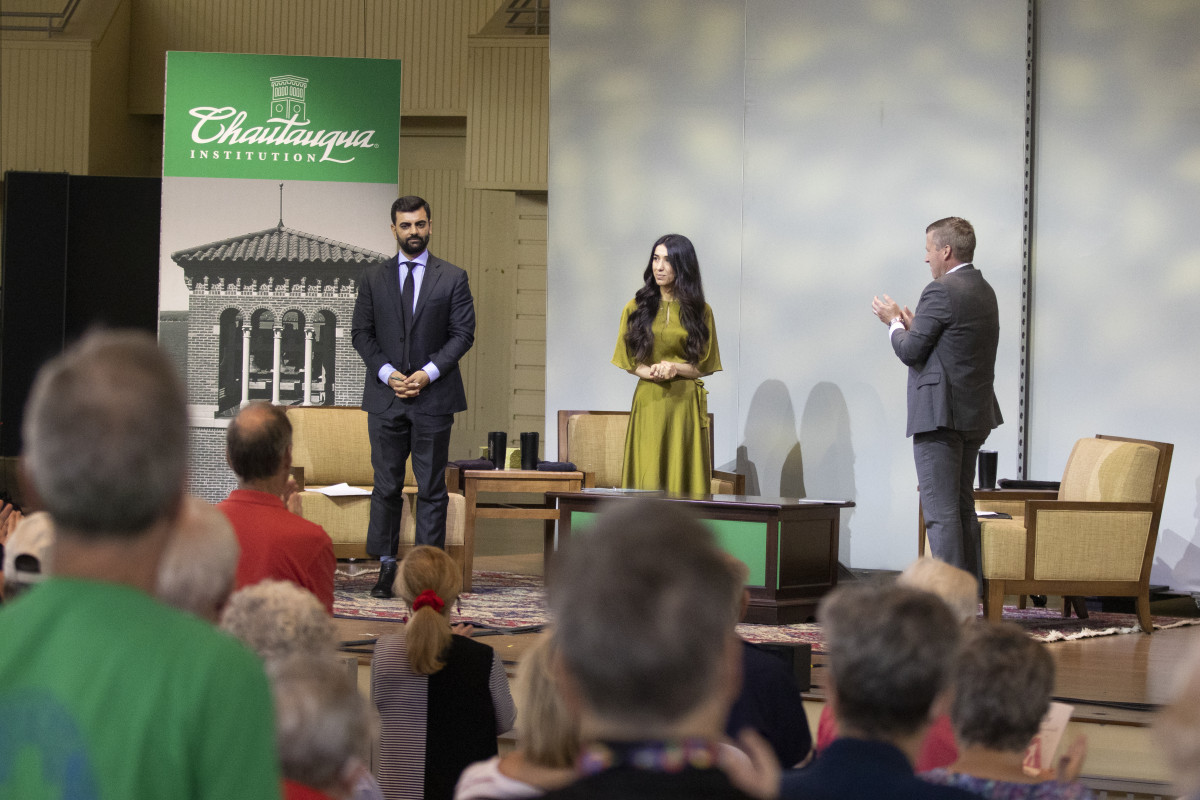 Nadia Murad has survived many atrocities, but she’s more than just a survivor.

“There is no way to speak of genocide that makes it easy to hear. Nor should we. Yazidis were subjected to some of the worst atrocities known to humankind,” said Murad, a Nobel Peace Laureate. “But as people, we are more than that. We are surviving, we are resisting, we are building back bit by bit, claiming our rights and demanding justice. We are not just victims. We are survivors.”

Murad, the executive director and co-founder of Nadia’s Initiative, closed out Week Three’s morning lecture series  on the theme “The Future of Human Rights” at 10:45 a.m. Friday, July 15, in the Amphitheater with her life story and her advocacy for survivors of genocide and sexual violence.

“In an ideal world (we) come together to imagine, we wouldn’t need the term human rights. We would exist in a global society where everyone respected, supported and empathized with one another,” Murad said. “Unfortunately, we do not live in that world. Not yet.”

This lecture followed a different format than others, as Murad spoke for 10 minutes before joining a moderated conversation with Institution President Michael E. Hill and her husband, translator and co-founder of Nadia’s Initiative, Abid Shamdeen. Her presentation capped off a week that began with Alison Brysk, the Mellichamp Chair of Global Governance in the Department of Global Studies at the University of California, Santa Barbara, saying that the key to human rights is women’s rights.

Murad, as a young Yazidi girl, faced a life of religion-based discrimination. In 2014, her small farming village faced horror as ISIS attacked with the goal of ethnically cleansing Iraq of Yazidis. The attack resulted in the death of her mother and six of her brothers. Murad, along with more than 6,000 women and children, was forced into sex slavery.

“How do we prevent this and similar atrocities from being repeated? We prevent it by focusing on the human aspect of human rights,” Murad said. “I am human. I breathe, I eat, I cry, I laugh and love. No matter (if) we are different in religion, race, ethnicity, gender, sexuality or culture, we have that in common. ISIS tried to revoke our humanity, but it was not for taking.”

Murad feels that change cannot be made alone, and that we must work together.

“From my experience, I have learned that making change does not always require shiny, new solutions. We do not live in isolation, so we shouldn’t try to make change in isolation,” Murad said. “Profound impact is made by building on the work of those who came before you and those already working on the ground alongside you. Most often, these changemakers come from local communities.”

Murad continued this call for change and collaboration.

“Through each action we take and each collaboration we build, we will make the world a little safer, a little better, and a little more equitable. We will reduce conflict. We will prevent sexual violence. We will dismantle the patriarchy. We will address climate change,” Murad said. “But we won’t accomplish this, we believe, alone. We will do it with individual and collective action, one step at a time. The future of human rights is a world where we no longer need a term to describe it because it just is, and it is a future that we shape together.”

After a standing ovation, Murad returned to sit with Hill and Shamdeen to begin the moderated conversation. Hill spoke of the horrors that Murad experienced and asked how is she able to lean back into it and help.

Murad spoke about her childhood growing up in harsh poverty as the youngest of 11 with a single mother. She was the only one of her siblings to attend school. At that time, her goal was to open a beauty salon in her village.

“Life was difficult, but it was simple. I lived through the most extreme poverty in my village and with my mom, but we were always happy because we were together and we working all the time to make a dignified living,” Murad said. “… I never imagined this world. I never wanted it. I just wanted to be with my mom and my siblings in that small village. But it’s what happened to me and my community that put me in this position.”

Hill asked Murad how she first began speaking and how the early years of that work were for her.

Murad never believed she would live a life of advocacy, but after experiencing human rights atrocities firsthand, she could not keep her story to herself.

“So I decided when I escaped from ISIS captivity … I wanted to start telling the world that I was lucky enough to escape, but there are thousands of women and girls that are being used for sexual violence, and we have to do something to help them,” Murad said.

Murad’s first taste of advocacy came to her through a “60 Minutes” interview in a refugee camp before she moved to Germany.

“ ‘60 Minutes’ came to Iraq and were looking for survivors to talk to them, and they came to me and my brothers and they said, ‘We want you to tell us your story and what happened and everything.’ I didn’t know ‘60 Minutes’ was popular in the U.S. or anything about media,” Murad said. “They told me, ‘If you tell us your story, and we know that you want to help others, we promise you millions of people will hear the story of your community and your story.’ I was like, ‘That’s it. I’m going to tell them my story.’ ”

She then moved to Germany where she had more freedom to share her story safely.

“I started talking to the journalists and anyone looking for evidence or testimonies. And then I had an invitation from the United Nations, and I was able to testify there,” Murad said. “People listened. And then world leaders listened. Religious people listened. And media and everyone. That’s how it started.”

Murad co-founded Nadia’s Initiative with Shamdeen after some initial advocacy work together. Nadia’s Initiative hopes to create a world where women live peacefully and communities faced with atrocities, trauma and suffering are supported and redeveloped. So far, Nadia’s Initiative has been able to rebuild more than 590 farms, 60 schools, connected 80 villages to clean water and are building a new hospital with the French government in Sinjar, Northern Iraq.

“I believe in concrete action. I know that when I was in the camp and so many survivors were there, so many people (thought) helping survivors was just about therapy, but I think it is more than that,” Murad said. “You need safe shelter. You need to be able to put food on the table and have some privacy. We had none of that. There was no privacy in the camps, and life was just temporary. We were just waiting for an opportunity. There was no education, nothing.”

So, she and Shamdeen started Nadia’s Initiative “to make sure that we can advocate on behalf of the community, for justice, and making sure that what happened to us will never happen to any other communities, and (to) hold ISIS accountable,” Murad said. “Meanwhile, you have to help people, to go back and rebuild and make sure that ISIS’s goal will not be accomplished (of) eradicating the community.”

Since starting Nadia’s Initiative, Murad has learned English, completed her last year of high school, which was disrupted by ISIS’s attack, and is currently a sophomore at American University.

“I’m more than just a story of trauma or a survivor. I had a family. I had a village. I had a life, a simple life, yes, we were not known to the world. We were poor. We were different. But we were human. I was capable of doing so many things,” Murad said.

Murad said people should educate themselves in order to be successful advocates.

“I don’t think we can do anything if we are not educated about people. And I know so many people have tried in the past eight years to do work in Iraq, but they don’t know where to start because they are not educated (on the situation). And I think knowledge is the key here. We have to be educated about it,” Murad said.

To end the official presentation before the Q-and-A portion, Hill asked Murad where she sees signs of hope. She paused before turning toward the audience and saying, “here.”

“All these people are here to spend the summer, and they have work, and so much is going on right now in the world. But they are still giving me their time to listen about a story in a community far away, in Iraq, and someone that came from that small remote village,” Murad said “This gives me hope that people care.”

Fr. Gregory Boyle, back to preach, to share tales of compassion