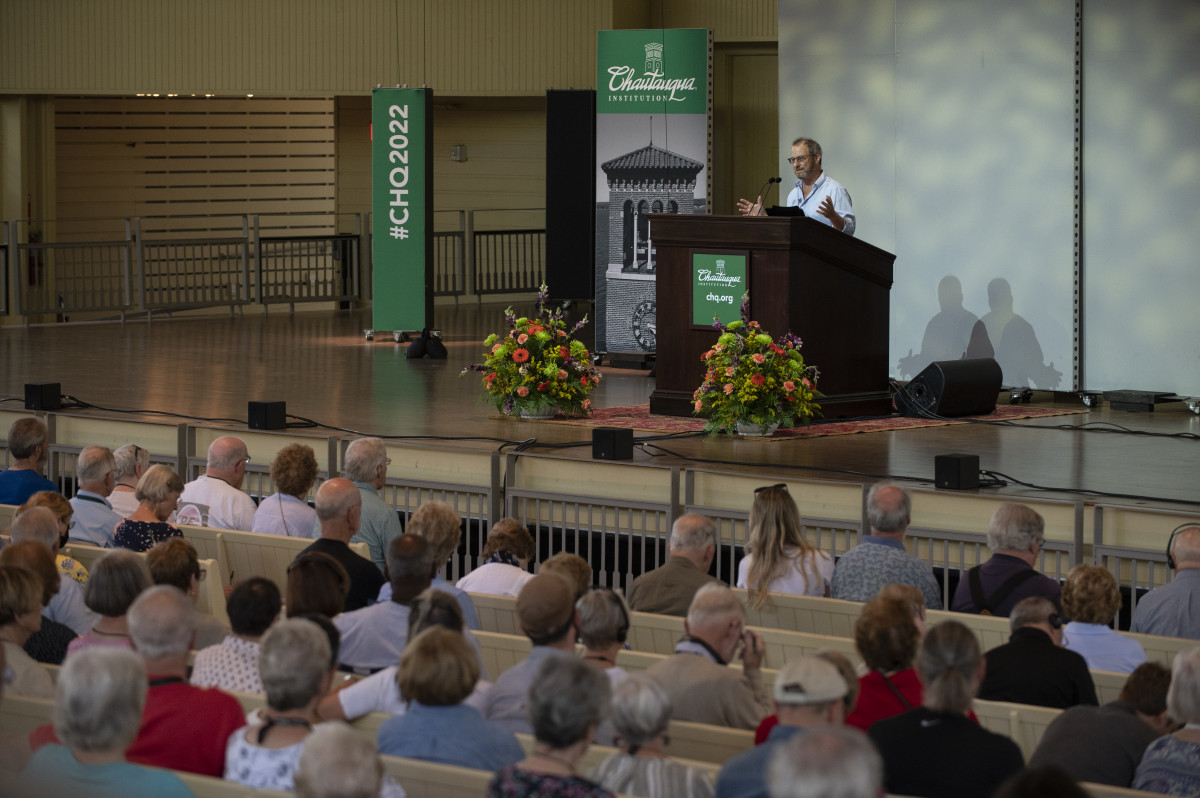 Abraham Lincoln once said that, “as a nation of freemen, we must live through all time, or die by suicide.” According to journalist George Packer, America is now dying a slow death by democratic suicide in a highly polarized political and social state.

“One way to think about democratic suicide in this country is a simple loss of faith in democracy: something slow and subtle, and even imperceptible,” Packer said. “But (there’s this) gradual belief in the public that everyone is on the take; that every politician is out for their own self-interest; that the media are simply a bunch of liars; that business is corrupt and always doing dirty deals with politicians; and that essentially there is no truth. We can’t know what’s real.”

Packer, award-winning author and staff writer for The Atlantic, took the stage at 10:45 a.m. Friday, July 1, at the Amphitheater to discuss an introspective view of what equality means in American identity through his lecture “Last Best Hope: America in Crisis and Renewal,” which shares the same name of his most recent book, published in 2021.

Packer has been a staff writer for The Atlantic since 2018, and he worked as a journalist for The New Yorker from 2003 to 2018, where he covered topics like the Iraq War and the war crimes in Sierra Leone. Packer has been a Guggenheim Fellow and a Holtzbrinck Fellow at the American Academy in Berlin.

After a week of lectures focusing on geopolitical strife in Ukraine and foreign affairs, Packer closed out Week One’s theme “What Should be America’s Role in the World?” by bringing Chautauquans home to examine internal democracy within the United States through fresh perspectives of international relations.

Packer launched into his presentation with a passage from Lincoln’s Lyceum Address about the need to preserve the United States by following the law and seeking out justice. The passage from the famous 1838 speech set the stage for Packer’s discussion of U.S. democracy throughout time.

The Civil War, Packer said, was a form of democratic suicide in history that Americans know well; the closest the country has come to that “form of suicide” since 1861 was that of the U.S. Capitol riots on Jan. 6, 2021.

“(Jan. 6) was the best and worst of times,” Packer said. “The best of times because more Americans had gone to the polls two months earlier in the middle of a pandemic than in our history, and that election, which was put under microscopic scrutiny, turned out to be about as fair and legitimate as any election we’ve ever had. It was the worst of times because the psyche of one man could not tolerate defeat and brought us to the brink of the overthrow of democracy.”

The events that happened on Jan. 6, in addition to the COVID-19 pandemic, have revealed the cracks in American democracy.

“As long as there are no political or legal consequences for what happened that day, American democracy will always have a gun to its head,” Packer said.

Consequences and loss of faith prompted Packer to examine what exactly equality means to America, and how the nation has drifted from the ideals of democracy — if it have ever even achieved it at all.

“(Equality) is about the idea that we’re all basically the same,” Packer said. “Equality as an ideal has been betrayed throughout American history. But equality as a feeling … (what de Tocqueville called) the passion for equality: a desire to be able to enter any world, to be anything, to be excluded from nothing on the basis of where you’re born or who you are, that is what de Tocqueville felt was the most distinguishing feature about Americans: the desire to be equal with everyone else. He called it equality of conditions.”

“We are red and blue,” he said. “Every election tells us how deeply divided we are, but the red and blue are in turn divided within themselves.”

Free America is an ideal defined by President Ronald Reagan’s “shining city on a hill.” It promotes individualism and deregulation of government.

“That was a powerful narrative,” Packer said. “I think it’s actually been the most influential of my adult life. It became the narrative of the Republican Party, and in some ways it remains that narrative.”

“Something didn’t work with Free America. That is, we are a society; we are not simply a collection of individuals. We are citizens,” Packer said. “Free America created a door that was the beginning of the inequality that I’m talking about. It was the beginning of the breakup of the social contract that had created a middle class, the biggest in history, and instead has led to the hierarchy, the stratified society that we all are familiar with today.”

Smart America is an identity of educated Americans with the belief that anyone can rise with the power of knowledge, popularized by the Clinton administration, which became the identity of the Democratic Party.

“That narrative says we need to soften the blows of our capitalist society, but the best path for anyone is to accept the future, to accept the information age,” Packer said.

But like Free America, Smart America created a major problem. It created a new aristocracy of the top 10% of educated individuals, which left out a majority of Americans.

“They had spectacular failures: the Iraq war, the Afghanistan war, the entire period of the war on terror … and the financial crisis of 2008 leading to the great recession,” Packer said.

The third narrative, according to Packer, is Real America, a term coined by Nancy Pelosi when addressing a fundraising event in North Carolina. It consists of uneducated, white, traditionally Christian Americans who he said “led to the election of Donald Trump.”

At the same time came the fourth and last narrative of Just America, which is a younger millennial generation that believes the United States has never confronted its history of corruption, allowing the country to continue unjust practices.

“This country is not moving toward a more perfect union,” Packer said. “It is not the best of all possible worlds. It is not a beacon of democracy to the nations. It is a country born in sin that has never rooted out that sin, that has a permanent character of oppression in its soul.”

Of the four narratives, Real America and Just America clash most frequently, representing the issue in these groups as a whole.

Having described his introspections of American identities, Packer laid out what he thinks is the most poisonous threat of democracy within U.S. borders: contempt and the loss of self-government.

“Today, our culture is marked above all by contempt,” Packer said. “Contempt runs through our discourse like acid, and it corrodes everything. Contempt is really satisfying because it relieves you of the burden of having to take seriously anything that the person you despise says. Contempt is the currency of social media, and it corrodes the spirit of any democracy between equals because contempt is inherently unequal.”

While the road to preserving democracy and equality in the United States is long, and the solution unknown, Packer called on the audience to remember that the American people have no other choice than to coexist.

“We can’t choose,” Packer said. “We are stuck with each other, so we cannot stop searching for the common identity, however fragile, that lies beneath the four Americas I’ve described.”

Apricot Irving, Neil Shepard to give public readings ahead of workshops