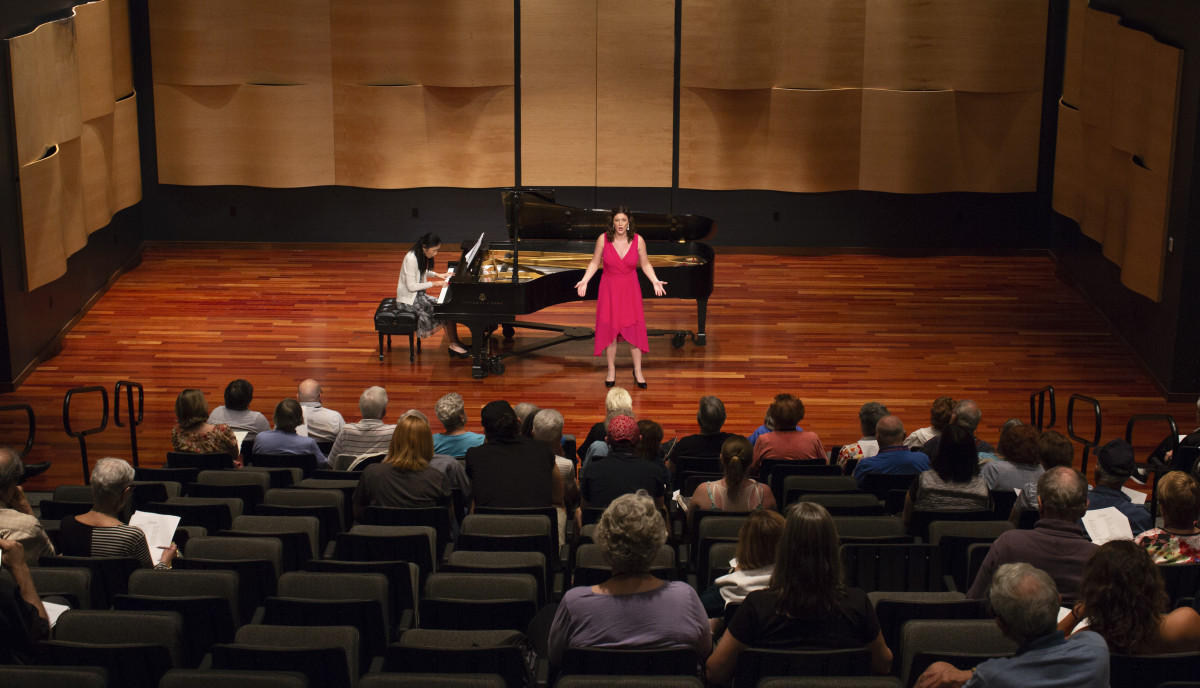 Where there is struggle, hope is often not far behind.

This is the theme behind the music chosen for the first Opera Conservatory recital of the 2022 season.

Four students from the 2022 Opera Conservatory — Reed Gnepper, Evan Katsefes, Katherine Malone and Marquita Richardson — will perform an array of music from art songs to soft rock at 7 p.m. Wednesday, July 6, in Fletcher Music Hall. While the songs may differ in genre, the idea of resiliency through strife unites them.

Gnepper, a tenor, chose “Imagine” by John Lennon, “not only to have program variation, but because this song is one of the best, most powerful songs to insight change in our modern era.”

Lennon penned “Imagine” in June 1971 with the Vietnam War as its historical backdrop. At this point, the Vietnam War was losing public support and morale was dropping due to heavy losses and the release of the Pentagon Papers. The song spiked in popularity once again after Sept. 11, 2001, as people again searched for comfort and hope in an uncertain world.

“It is one of the only protest songs of that generation (the 1960s and 1970s) to express the hope of finding peace within one’s lifetime on this planet that we all share,” Gnepper said. “It is one of the most iconic songs of that generation, and the message of wanting something more than yourself and wanting to help others is a global message that inspires me to make my art.”

Similar to “Imagine,” Katsefes, a tenor, chose Samuel Barber’s “Sure on This Shining Night,” which takes a topic that has the potential to only focus on the negative and instead focuses on a more positive attribute: peace.

“Through the repeated chords in the piano and the opening line, one can instantly feel the importance and the meaning of the night. The night may seem like a dark, unknown place where we are left with our very human and intimidating thoughts,” Katsefes said. “It ties in perfectly for the world today, as we long for the eternal ‘night’ of conflict, war, plague and fear to be over.”

Even with this heavy topic haunting the song, its lyrics look at what intermingles with night.

“Kindness must watch for me / This side the ground,” the song goes. It continues a line later: “All is healed, / All is health. / High summer holds the Earth. / Hearts all whole.”

For Katsefes, sharing this song means sharing that message with Chautauqua.

“This recital is very close to my heart, and I look forward to participating in it because perhaps, in our small effort here in our tiny corner of the universe in Western New York, we can bring the world one step closer to the joy that is promised to us in the morning,” Katsefes said.

Malone, a soprano, is also looking forward to the recital.

“This recital is so exciting for me because it is part of my own childhood dream come true,” Malone said. “I grew up coming to Chautauqua with my family and watching voice recitals and productions. This will be my first Chautauqua recital I perform in rather than attend as an audience member, and it is thrilling.”

Malone will sing “Somewhere Over the Rainbow” by Harold Arlen, which is a song she has loved since childhood.

“To me, ‘Somewhere Over the Rainbow’ represents a longing for peace and harmony. The lyrics talk about a place ‘where troubles melt like lemon drops,’ and where ‘dreams really do come true,’ ” Malone said. “ I think this is a representation of humanity’s desire for happiness. We want to believe in a better world.”

Mark Wenzler to discuss what net-zero carbon might mean for NY, CHQ