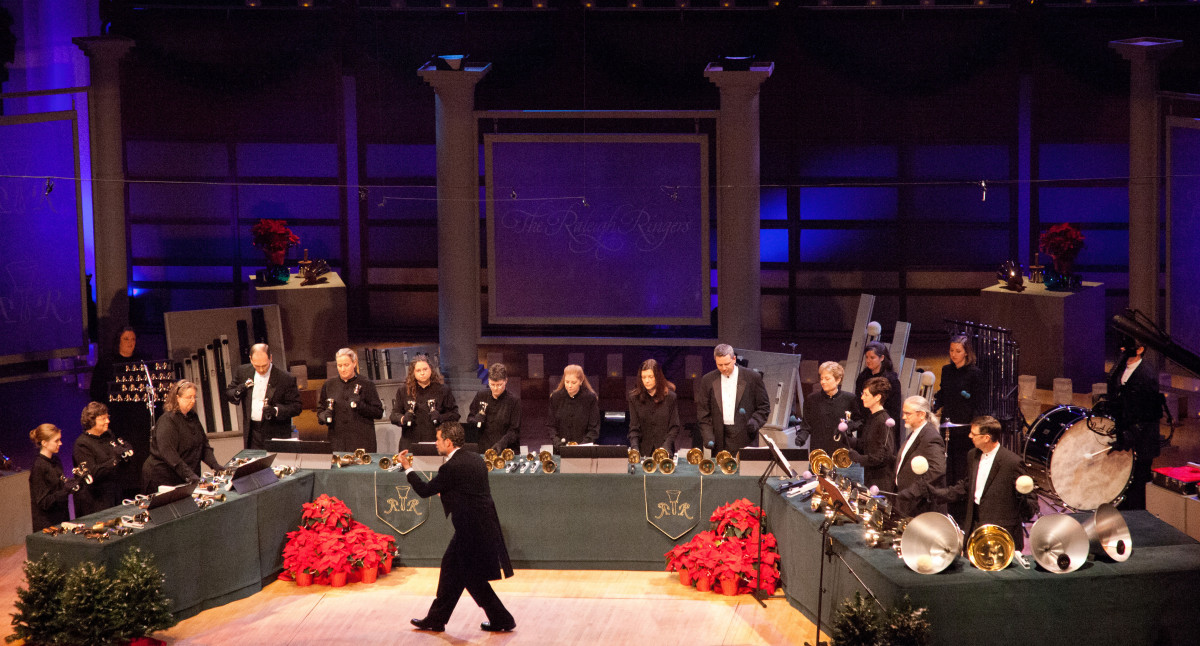 The chimes from the Miller Bell Tower won’t be the only bells ringing this week. Returning to Chautauqua Institution for the sixth time, the Raleigh Ringers will be performing at 8:15 p.m. Wednesday, July 13, on the Amphitheater stage.

Founded in 1990 in Raleigh, North Carolina, 2022 marks the Ringers’ 33rd season performing. Throughout the group’s career, it has performed nationally, in 39 states across the United States, and internationally in countries such as France and Canada. The Ringers have been featured in two national primetime holiday special concerts on PBS, titled “Holiday Handbells.”

The ensemble first came to perform in concert at Chautauqua in 1999. Unlike other musical groups, the group performs using only one type of instrument — handbells.

They own the most extensive collection of handbells out of any performance group. The ensemble contrasts the traditional sounds of English handbells, with the overtones of Dutch handbells, and the steady tones of choir chimes, to form a dazzling synchronization of sounds.

The 18-member group performs a gamut of music, ranging all the way from classical music to rock ’n’ roll tunes, and sacred songs to secular music. David Harris, director of the Ringers, said that Chautauquans can expect to hear a wide variety of music tonight.

“We will perform some traditional sacred songs,” Harris said. “But, we will also do some original music that was written for the instrument that is more solemn and serious. And then we will do lighter stuff, as well.”

The ensemble will perform songs such as “Hotel California” by the Eagles, “Yakety Sax” by Boots Randolph, “Flight of the Bumblebee” by Nikolai Rimsky-Korsakov, “Be Still My Soul” by Katharina von Schlegel and “Stars and Stripes Forever” by John Philip Sousa, which has become a Chautauqua favorite.

Playing “Stars and Stripes” has become a tradition every time the Ringers return.

Harris has been the director of the group since its original formation in 1990, and is one of the original founders of the ensemble.

“The core group of Ringers and I had the concept of creating a community not based on any other organization,” Harris said. “We got started to provide an opportunity for folks to be in an advanced choir to play different music. People generally learn and play handbells in churches. But this way people can play from a concert stage.”

Playing from concert stages allows the group to not only play sacred music but incorporate different genres of songs.

Harris said that the Ringers will be hosting an instructional handbell workshop through Special Studies from 4 to 5 p.m. this afternoon at the Amp. One of the group’s key missions is to teach others how to play through handbell festivals and workshops.

“As we’ve learned skills ourselves, we like to share those with others,” Harris said. “A big part of our group is education, as well.”