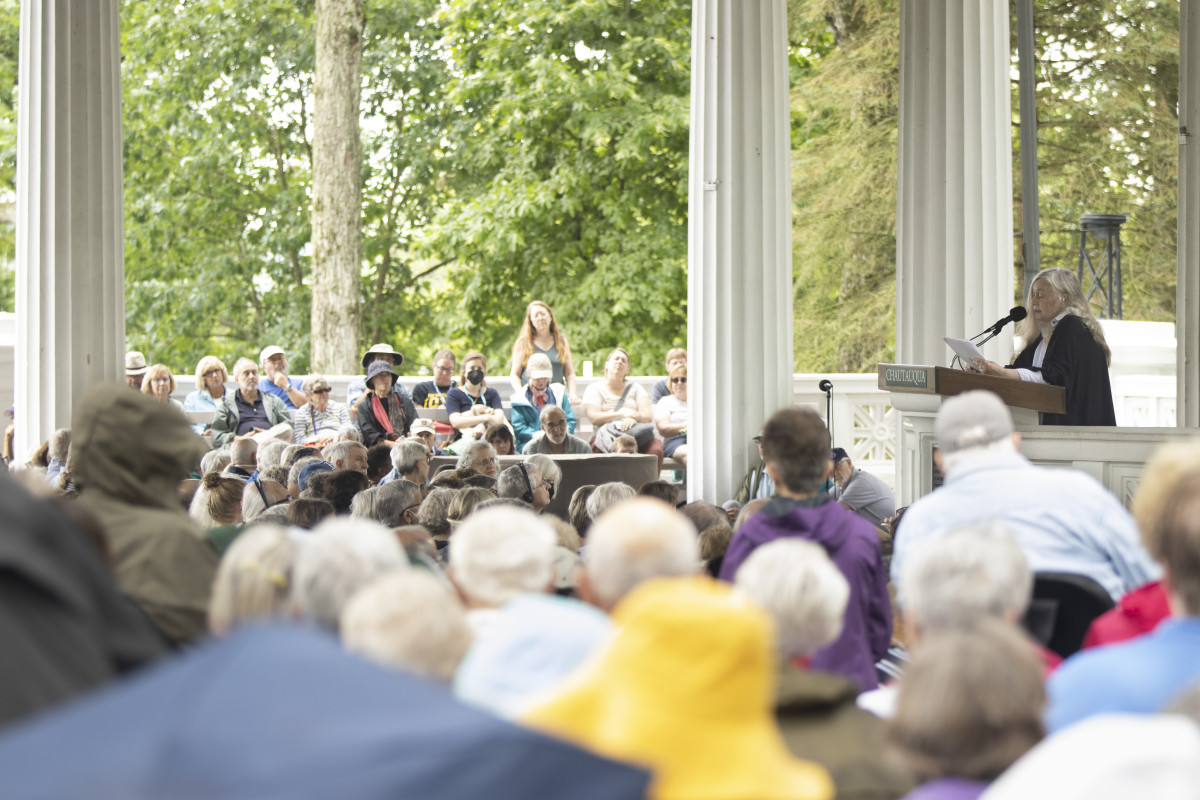 Throughout history, science and religion have been at odds with one another, as they both attempt to answer questions about existence in different ways.

Her lecture, titled “Let There Be, and There Is: Creation and Reality,” opened Week Four’s Interfaith Lecture Series theme of “The Future of Being,” Monday, July 18, in the Hall of Philosophy.

Robinson is a highly-decorated fiction and nonfiction author, and was the recipient of a 2012 National Humanities Medal from President Barack Obama for “her grace and intelligence in writing.” She is the author of Gilead, which earned the 2005 Pulitzer Prize for Fiction and the National Book Critics Circle Award for fiction.

She was also named in TIME’s 2016 list of “100 Most Influential People,” and Oprah Winfrey recognized Robinson as one of the greatest living authors, referring to her novels as masterpieces.

Robinson said that she has never undertaken a more difficult assignment than talking about the future of being while simultaneously discussing the relationship between religion and science.

“I have been interested for a long time in theology, and also in science. These two brilliant fields of thought have been at odds, supposedly, since the rise of what might be called the modern period — say, beginning in the 19th century,” Robinson said. “For the next 100 years and more, science flourished, applying its model of rationalism to every question. While increasingly, religion struggles to find any way to justify its existence in face of triumphant demystification of reality.”

Yet, Robinson explained there was a shift — science became difficult to understand once complex theories arose. Science began to oppose creation myths and traditional teachings of religion.

“Science, as it advanced, did not much resemble (19th-century scientific leaders’) conception of it, but their views never moderated,” Robinson said. “In the meantime, religion was damaged and science was, too, so far as their reputations are concerned. Religion is viewed as ignorant and fear driven. Science is atheistical and arrogant.”

Often, the worst or most extreme characterizations of each form of thinking are the ones that are embraced by the masses; Robinson called for people to think more generously about one another.

“In light of the fact that science and religion are two major pillars of our civilization, it seems there should have been some effort at rehabilitation. I haven’t noticed any,” Robinson said. “Science has felt the consequences of all this in budget cuts and controversies in schools. … Religion, meanwhile, has been largely overtaken by belligerency, darker and cruder than obscurantism. … At the end of this hard-fought and meaningless struggle, nothing was resolved, and there was a grave loss on all sides.”

“Seen at the scale of atoms, we disappear into a cosmos of atoms. Seen at the scale of the physical universe, we simply disappear,” Robinson said. “But here, between these extremes, most things make a kind of sense to us. Amazingly, we do things that matter. We make real choices.”

Humans of the past would have never imagined that the universe is what it is hypothesized to be in the modern era. Robinson pointed to the physics of the universe, with its particles rushing away from each other at a rate that shatters the web of gravity.

“Within our little quiet, which is at least as remarkable as the cosmic roar and everything that carries with it, we have been up to all sorts of things — testing the limits of good and evil, filling the calm with havoc and disruption, making music and poetry,” she said.

Although religions have differing views regarding the creation of life, there is no life biologically similar to life on Earth that humans are aware of; this in itself could be considered a miracle, Robinson said.

“This creator, without history or lineage outside time, freely and sufficiently by his effortless will gave us the world we know. Because, scientifically speaking, nothing in existence in any form assures or explains its own continuance, its self-replication from one moment to the next, all existence can be thought of as willed into being from moment to moment. Let there be, and there is,” Robinson said. “The same can be said of the entirety of the universe, that it is sustained inexplicably to its unimaginable farthest reaches.”

But Robinson questioned why this existence is not pure, if it was created by God or a divine figure.

“Why do resentments live on in our brains and the brains of those we might have injured when we would both be better off without them? Such questions could be put another way,” Robinson said. “Why do we have moral expectations of God? … These are very serious questions. And this is the point at which my true religious thinking stops, finding no resolution possible.”

Robinson understands that these questions of creation should loom and ache, that humans have an inherent calling to wonder at the marvel of life and its meaning. Yet, many other struggles exist within the human experience.

“The great struggle may be to love and enjoy the aspects of one’s own singular being … (and) there are the millions of lesser struggles that are much more likely to engross us,” Robinson said.

Although most humans feel as though their lives are insignificant — both within the history of human existence and within the universe — Robinson said individuals are not competent enough to decide how much they matter in the long run. She shared a Puritan concept, that “we will be judged twice: once when we die and once when everything we have said or done will have had its final effect.”

Humans are unaware, scientifically speaking, of when and how time was created, or even what time truly is. Despite people’s lives being ruled by time, she said, God is separate from the constraints of time, which allows God to see the consequences of each human life.

Centuries of time have collaborated to produce the present reality as humans know it. Robinson described this as a small flame that has turned into a great fire, particularly in American society.

“Over centuries of time, slanderers have burned heretics and witches, launched pogroms, inspired lynchings and purges. Now we have grown used to hearing Americans call Americans demons,” Robinson said. “… We can see with our own eyes how exciting this conflagration is to many people in this country, even while it threatens to consume democracy root and branch. Our children and their children will grow up in a country much changed by what is happening now — not for the better.”

Guilt is not placed on just the perpetrators, but also on those that are complicit in allowing these behaviors. Robinson called these crimes collective and deeply personal.

She suggested that neither science nor religion have been successful in carrying the values of human dignity held within and practiced beyond. Altruism is not as deep-rooted in human existence as it has been believed to be.

“We’ve been told again and again that selfishness is not only natural, genetically implanted in us, but it is also the real motive that underlies all behavior, whatever we might think we intend. We can look at our world and see for ourselves that their selfishness is compatible with nature,” Robinson said. “… It’s very unscientific, I think, to try to define anomalies out of existence. … As a matter of fact, people are often generous.”

Although there is not one proven reason why anything continues to exist, Robinson said everything depends on what has existed before, and knowledge grows upon previous knowledge.

“If we say what we know about the physical, we find ourselves dealing in quantum phenomena in the supposed void where matter and antimatter forever wink into and out of existence,” Robinson said. “… It is beautiful to think that both hand and book are shaped from the energies of near nothing in a manner consistent with the emergence of being itself.”

With humans’ knowledge of beings and objects, there is also a certain consensus of the feelings humans synchronously perceive, Robinson said.

“Our thoughts come burdened with guilt and dread. There are excellent grounds for this: The planet is vulnerable in every way that it is exceptional. … At the same time, I wonder whether the guilt we feel toward it is compatible with the love it needs and certainly deserves,” Robinson said.

The human perspective is limited to one’s scale, one’s perception of the Earth, and Robinson described both the power and limitations of this ability.

“Evening and morning, seedtime and harvest, it shapes time for us. The days and the years can seem long enough, though in the life of the universe, they are nothing,” she said. “We should feel awe at the power of this little world to somehow remake time and scale so that we can wander, work, learn and finally grow old and feel that the dimensions of our lives have been wide indeed.”

The rarity and near-impossibility of Earth’s existence and capabilities makes all life brilliant, and Robinson even finds humans’ errors, failures and shortcomings to be impressive.

“I believe we should consider a theology of the present moment. Our best hope is that the world will continue to be as it is now, granting injuries and losses, granting drastic weather,” Robinson said. “We could figure out how to live with the present world.”

Even though the world has undergone thorough change since humans began to inhabit it, Robinson sees facets of the present Earth as remarkable.

“Earth is now the most astonishing thing in existence, including its creaturely life, including humankind,” Robinson said. “If we imagine a day when the last dandelion freezes its last seed, that seed will be the most astonishing thing there is, even if there is no one to see if it finds a niche. Everything potentially miraculous in a blooming weed is miraculous in it now.”

Robinson calls the world a “special reality” with its arbitrary properties, such as space, time and causality, that allow humans and all other life to inhabit it. She has often sought a metaphor to describe such a reality.

“And now I realize that reality itself, as we experience it … is the metaphor I need,” Robinson said. “… Say that out of teeming possibility, the creator chose a modest star and a single moon, elegant restraint, … even the universe itself, an endless array of choices made, or so we experience it. Let there be light — birds, sea monsters, and then, the most amazing act of restraint or will, let there be humankind with all its gifts, left with a certain freedom.”