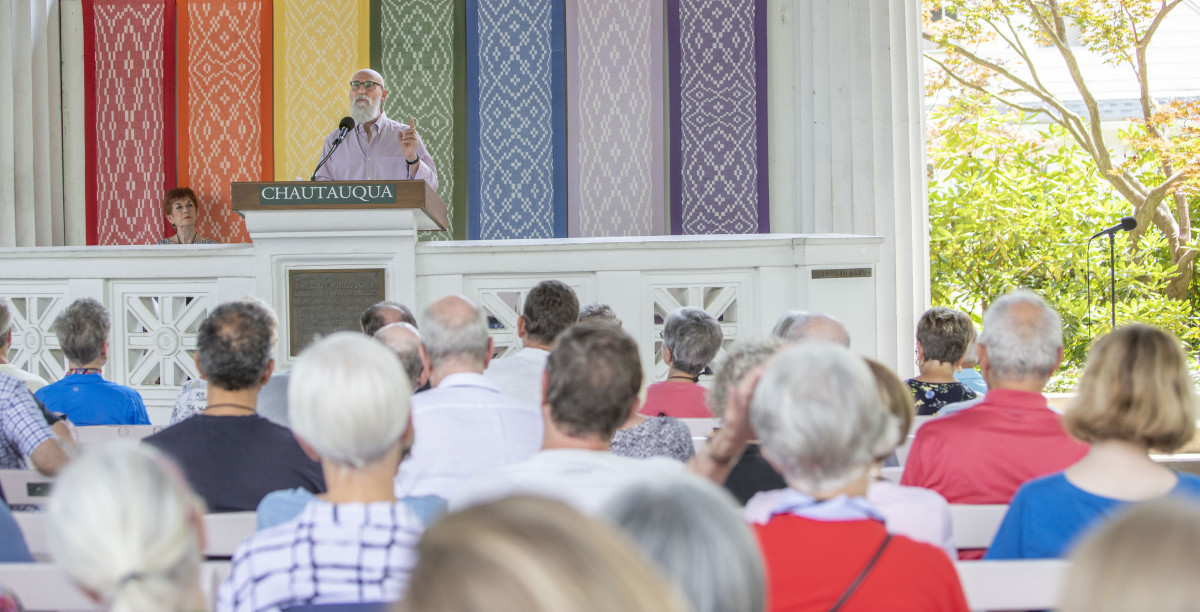 America may be entering a new phase of change in religious and spiritual values.

Rabbi Shaul Magid spoke on this forthcoming transition by explaining the relationship between culture, religion and spirituality, in relation to the New Age, Wednesday, July 21, in the Hall of Philosophy.

With his lecture, titled “Can Religion Survive Spirituality? A View from Jewish Mysticism After the New Age,” Magid continued the discussion of Week Four’s Interfaith Lecture Series theme, “The Future of Being.” He detailed the past to better express what may come to fruition in the future.

Magid, the Distinguished Fellow of Jewish Studies at Dartmouth College and senior research fellow of Kagod Research Center at the Shalom Hartman Institute of North America, is considered an expert in Kabbalah, Hasidism and contemporary Jewish religiosity.

“Religion is often the backbone of these cultures, and political theorists have argued that culture is itself often derivative of religion, often in secularized forms,” Magid said. “What separates religion from culture is that religion, at least the Western religions, … founded its principles on or around a divine being.”

Culture often contributes to the quality of life, but Magid said it doesn’t necessarily provide people with a purpose.

Religious traditions often claim that one can only reach God through particular practices, while spirituality counters with the belief that God can be accessed through a variety of means.

“Culture can be informed by religion and even contain spiritual elements, but it doesn’t have to,” Magid said. “… Culture is based on the past, but it’s not bound to it; it changes organically.”

Tradition plays such a prominent role in religion due to its connection to the past, and Magid said that culture does not necessarily carry the same burden.

“Sometimes culture seems to conserve the past for progress, which includes negatively, but its rootedness in the past is often more ambiguous,” Magid said. “This is why, for example, certain cultural movements of conservation or conservatism often deploy religious categories to anchor their views in a more authoritative past.”

Recognizing religion’s inability to adapt and change, Magid noted the dangerous effects of religious stagnation. He also noted the issues that come with criticism.

“The danger of religious inability to engage in self-critique, in some cases, resulted in fundamentalism,” Magid said. “… And when the critique of religion is too strong, it can result in the demonization of the role of religion, often viewing religion as the problem that plagues our society.”

While the separation of church and state is a tenet of American democracy, religion has always, to some degree, been intertwined with politics.

The opposite can also be argued — some believe America could not survive without religion or culture, and this paradox puts everyone in a difficult position, according to Magid. He suggested that even though this plight creates tension, it is also the motivator for society to continue to evolve productively.

“Our form of government has no sense unless it is founded in a deeply felt religious faith, and I don’t care what it is.”

Although it is not exceedingly clear what Eisenhower meant, Magid said he interpreted it as a calling to citizens to believe in a higher purpose.

“The ’50s also, as some of you will remember, saw a rise in scientism, in atheism, in the belief that the power of humanity (will) move beyond the need for God,” Magid said. “That may have been what Eisenhower was responding to.”

Reflecting on the New Age movement of the 1970s, which is also called the Age of Aquarius, Magid said this cultural and spiritual shift still impacts society.

“(The New Age movement) yielded a look upward, and perhaps, more accurately, a look inward,” he said. “The Age of Aquarius — seismic, cosmic change, a new axial era, a paradigm shift, a spiritual critique of capitalism, the beginning of environmentalism — … filled the vacuum created by the demise of political radicalism.”

The result of this movement was a new interest in religion; Magid described it as “a new refraction of religion through a spiritual critique” of the patriarchy and formalism.

“While in some way the New Age made religion more popular, it also forced religion to conform to a new paradigm of spiritual awakening,” Magid said.

The New Age also introduced the idea of a global perspective and universal accessibility to religion.

“Religious traditions could participate in the New Age project, but one of the criteria was to envision access to divine power as equal to all, regardless of collective affiliation,” Magid said. “Fidelity to religious norms could survive if they were envisioned as serving the larger cause of human flourishing and global solidarity.”

Even though the New Age was not a political movement, it spread ideas of environmentalism and human rights with a criticism of materialism and consumerism. Mysticism was an impactful vehicle of both critique and openness.

“Mysticism can function in one of two opposite ways. The mystical frame can universalize from an experience, making the mystic aware of the broader frame of any religious tradition,” Magid said. “… Alternatively, mysticism can serve to centralize religious claims, thereby deepening particularism. … In this iteration, mysticism hardens difference and works against the New Age goals of creating more avenues of shared spiritual life and different peoples.”

“So to finally address the title of my talk, can religion survive spirituality in 21st-century America? Of course, I don’t really have an answer,” Magid said. “… But I think it’s safe to say that we are living in the afterglow of the New Age and no longer in its midst.”

While utopian ideas of the Aquarian Age did not reach fruition, Magid said the movement’s so-called failure was still influential, resulting in changed perspectives. But the world in 2022 is much different than it was in the ’50s or even the ’70s.

“We have been smothered by technology through the internet and artificial intelligence, which have maximized communication, but hindered human interaction. But we also see ourselves in a more globalized perspective,” Magid said. “In short, we are moving in many directions at once; massive wealth skyrockets, while abject poverty continues; weapons of mass destruction proliferating, and people are being killed in the street with knives and guns as if we’re living in the wild west of the 19th century, or some kind of dystopian science fiction film.”

Magid said religion has the potential to play a constructive role in solving these problems due to its thousands-of-years-long existence and ability to survive attacks. But he also recognized religion’s inherent ability to separate humans from one another, viewing “humanity hierarchically rather than horizontally.”

Yet, religion is powerfully interwoven into culture, so much so that Magid believes it will not disappear.

“Science is crucial in many ways. But science doesn’t produce culture. … Science tells us how to live, but it doesn’t really tell us why,” Magid said. “I suggest we’re presently living on the back edge of a sweeping critique of religion in the New Age movement.”

While the New Age left behind a cultural critique of consumerism and religious fundamentalism, Magid suggests that the return to religious particularity must be fought with cooperation, peacemaking and inner criticism.

“Perhaps religion is best served when its internal critique remains operational, when spirituality embedded in religion pushes against religion’s own darker impulses to divide and claim ownership of the divine,” Magid said. “The question then isn’t ‘Can religion survive spirituality?’ but (rather) ‘Can spirituality save religion from itself?’ ”

While America continues to face a divide as a result of the same issues that it has faced for centuries — race, religion, culture, gender — Magid hypothesized that people are perhaps becoming primed for another spiritual intervention.

“The stakes may be higher now than they were in the 1970s. The Earth is more precarious than it was 50 years ago, guns are more readily available, religious maximalism has rooted itself more deeply in cultural consciousness,” Magid said. “… Spirituality, a sense of transcendent meaning that may be born from — but it’s not limited to — religion, is not the answer. At most, it’s only part of the answer.”

Non-delusional response to everything is kindness, says Fr. Gregory Boyle

Alexandra Zapruder to lecture on youth’s power to document past, present histories